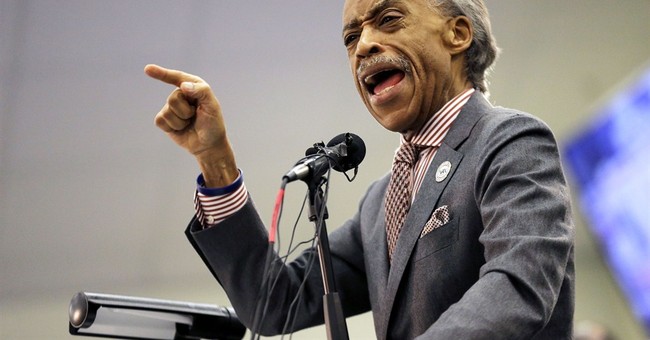 A picture isn’t always worth a thousand words and a smart phone video can actually be less descriptive of reality than a surrealist landscape. If Roger Patterson made his famous 1967 Bluff Creek video of a hirsute and hulking beast, loping toward the tree line in today’s environment of trial by Twitter Peeps and FaceBook friends, his Bigfoot film would play in the Smithsonian alongside the footage of Neil Armstrong’s giant step.

Most Liberals have been bottle fed on YouTube, Vimeo, MSNBC, and CNN sound bites and weaned on TMZ and selfie sticks. They've been matriculated into a graduate school of “reality television” where the cognitive function is assaulted at a cellular level by a numbing flood of prepackaged mundanities pouring from icons of society’s cesspool menagerie like Snooki, or the perpetually dysfunctional Kardashian litter. The accumulated bulk of the inane crushes into oblivion, any pattern of analytical thought struggling to consciousness. In this disambiguation of reality, a video fragment and soundbite are as conclusive as the meticulous deliberations of an informed grand jury.

On Saturday, April 4, Officer Michael Slager initiated a car stop involving Mr. Walter Scott. Dashboard camera footage shows Scott fleeing from the scene on foot. At some point, a physical altercation occurred between Scott and Officer Slager, resulting in Officer Slager deploying his department issued TASER. Reportedly, a struggle ensued over the TASER and Mr. Scott again attempted to flee. Cell phone footage from a bystander shows that Officer Slager then drew his service weapon and fired at Mr. Scott as he fled on foot. Mr. Scott did not appear to be armed at the time of his flight, and was struck five times by rounds fired from Officer Slager’s pistol (three rounds striking Mr. Scott in the back, one in the upper buttock, and one round in the ear).

Aside from a recitation of the relevant facts, the mainstream media has taken great pains to describe Officer Slager as white and Mr. Scott as black. A quick survey of Google will demonstrate the uniformity in media propagandization. Racial combinations are absolutely irrelevant to the mainstream media when police shootings involve people who are not white and black. Apparently, any encounter involving a white individual and a black individual is de facto racially relevant. The only logical reason for this bizarre juxtapositioning by the media must be an inherent bias or, darker still, the blind pursuit of an agenda. Either conclusion is damning for an enterprise which, historically, occupied a place of significance in American society by an averred objectivity. However, the main stream media has abandoned all pretense to objectivity, spurred headlong in the pursuit of a tantalizing goal. For the Liberal media, the Obama administration is the hoped for realization of decades of patient subversion. Liberals feel that the prize of a socialist utopia is so close that any pretension may be safely dispensed with, since the acquisition of despotic power lies just at their fingertips. The media is shamelessly in league with the robber barons of the racism industry, and they eagerly assist in the rabble rousing so critical to the continued relevance of the charlatans of black leadership.

It is impossible to determine from a brief video clip what racial dispositions exist in Officer Slager’s mind. But, for hucksters like Al Sharpton and the Liberal media, white police officers are guilty until proven innocent. They may revel in their political arson now, but once the flames of hate are brought to a flashpoint in the mindless bonfire of the mob, it easily blooms into an inferno consuming everything in its path. Despite the voices of racism on the left, Officer Slager is innocent until proven guilty, and the undoing of this fundamental precept of American jurisprudence promises to loose the tyranny of the lynch mob on those most vulnerable—minorities themselves.

What is clear is that Officer Slager fired at an unarmed man who was in the process of fleeing a lawful arrest. Mr. Scott was wanted for failure to pay child support and had a history of criminality. Contrary to popular opinion, it is not unlawful for a police officer to use lethal force on an individual who is fleeing with his or her back turned. The legal standard is always reasonable cause to believe that the subject presents an imminent threat of serious bodily injury or death. Imminent threat may exist if a fleeing felon is seeking the advantage of cover or if he or she is fleeing armed with a firearm and may be in the position to turn and fire. There are a myriad of hypothetical circumstances; however, the facts, as presented, do not seem to support Officer Slager’s decision to use deadly force. And, this is really all that can be said, legitimately. A jury of Officer Slager’s peers will determine his ultimate guilt or innocence, not an emotional and uninformed rabble of Twitter pundits. Additionally, the family of Mr. Scott will have the opportunity to have their cause heard before a civil court. What is unconscionable and despicable are the words and actions of those who insert the specter of racism into a tragic episode which bears no evidence of it.

The thousand pound gorilla in the room that no one dares acknowledge is the role of black criminality in situations involving the use of deadly force by law enforcement. Though Officer Slager does not seem to be justified in his use of deadly force, Mr. Scott would still be alive today had he simply submitted to a lawful arrest. Law enforcement officers bear the heavy responsibility of using their vast authority in a lawful manner and almost every law enforcement officer performs his or her duty under circumstances that most people would find to be intolerable. The thin blue line is stretched ever thinner by the onerous burdens placed on them by a Liberal media, animated by a racist agenda and by an administration hostile to law and order. The real issue in law enforcement use of force is almost always one of a suspect’s criminality. Cops rarely, if ever, employ force except in circumstances created by the criminal. Law enforcement officers are trained to be reactive in their use of deadly force and, by most department policies, are obligated to follow a use of force continuum that only permits an escalation of force in response to greater threats presented by criminals.

In the end, this tragic incident is a demonstration of how the racism industry continues to cling to relevance by propagating a very tired lie. Officer Slager shot Mr. Scott on a Saturday, and by the following Tuesday was stripped of his job, charged with murder, and incarcerated. The Civil Rights movement was about abolishing institutional racism and bigotry. No society will ever completely eradicate individual attitudes of racism, because it’s part of the human condition. Racism exist in Europe, it exists in the Middle East, it exists in Asia, it exists in democracies, in fascist states, in communist regimes and it exists in the most noble nation to ever rise from the mire of tyranny—America. But, racism does not exist as a matter of public policy, much to the chagrin of Barack Obama and Al Sharpton. And, in this broadest sense, America is post racial. The struggle now is not against the oppression of minorities by the state but against a political party that struggles to harness the fear of minorities in the service of Democrat operatives. Officer Slager’s experience is a testament to the fact that American justice is color blind, and that the efforts of those who labored during the Civil Rights movement were successful. Officer Slager’s imprisonment is a testament to the irrelevancy of Al Sharpton and those of his ilk. Mr. Scott’s family knows this, and rebuffed Sharpton by publicly announcing their desire that he not stain their private grief with his self-aggrandizing stunts.

For many, proof beyond a reasonable doubt finds its highest expression in 30 seconds of raw, truncated video. Attempting to interpret reality through the myopia of the lens is like attempting to describe an elephant while only observing its tail. But, this is all the race baiters want you to see. They don’t want you to see America as it really is, filled with people who care nothing for the color of one’s skin, but only for the content of their fellow citizen’s character.