Maybe The LGBT Community Should Bake Its Own Cakes 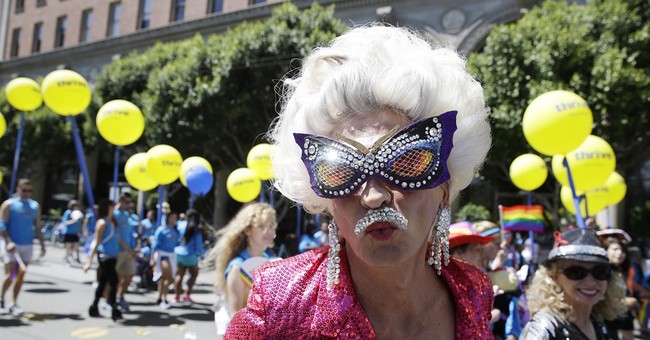 Imagine an America where atheists, Buddhists, Catholics, Protestants, agnostics, Hindus, and Muslims are all subject to the whims of local, state, and federal legislators. Gone is our most fundamental Civil Right, Freedom of Religion. Each person’s conscience is subject to the loudest and most organized objector. Every man servant to caprice, perversion, and proclivity. Imagine an America where one ideology is ensconced as supreme, where debate is criminal. This statist dystopia is precisely what the Lesbian, Gay, Bisexual, and Transgendered (LGBT) community militates for—a caliphate of sexual psychosis. The LGBT movement isn’t a debate about Civil Rights but about special treatment for a special interest. We are moving ever closer to the tyranny from which the Pilgrims sought escape.

Indiana Governor, Mike Pence, signed SEA 101 into law on Thursday. The “Religious freedom restoration act” purports to, as a matter of civil procedure, prevent “state or local government action” that “substantially” burdens “a person’s right to the exercise of religion.” The act does not prevent parties from instituting a cause of action but merely sets forth a standard by which a person’s civlil right to exercise his or her religion may be asserted as a positive defense. The Religious Freedom Restoration Act resonates with the Federal Constitution’s First Amendment which is far more restrictive of the federal government’s authority, forbidding the federal government from passing any law touching on religious practice: “Congress shall make shall make NO law respecting an establishment of religion, OR prohibiting the free exercise thereof; OR abridging the freedom of speech, OR of the press…” (emphasis mine)

The Pilgrims fled Europe in the face of religious persecution and bigotry. And, sought refuge in the Americas to pursue the practice of their faith unmolested. Religion is essentially American and the acknowledgment that religion and the freedom to practice as conscience dictates is sacrosanct, beyond the purview of governmental interference. This idea does not preclude diversity but is, in fact, it’s most necessary component.

The Protestantism of the Puritans is the fertile soil from which the liberality of limited government springs. The preclusion of government jurisdiction from matters purely of conscience is a Christian and, more specifically, a Puritan ideal drawn from the bitter experience of establishment persecution. It is this liberality of thought that allows the LGBT movement to exist at all. One need only reference the treatment of homosexuals in other parts of the world, such as the Middle East, to understand just how inclusive and tolerant our society really is. The LGBT movement, quite literally, bites the hand that feeds it. They demand governmental involvement to confer special rights, and in so doing diminish liberty. They appeal to government as the arbiter in matters of conscience, dragging the fox into the henhouse in hopes that the fox never decides to sate his hunger with their blood and bone. Conversely, America’s tradition of faith places these matters of conscience outside the sphere of legitimate government’s authority, which results in pervasive liberty for everyone, religious or not. The Church reigns supreme in matters of conscience and its methods of influence are prayer, evangelism, and compassion.

The debate and rancor that has resulted in laws like Indiana’s Religious Freedom Restoration Act, stem from several incidents, beginning in 2012, over members of the LGBT community demanding services from small business owners. Initially, a baker in Colorado was approached and asked to bake a wedding cake for a same sex marriage. The baker declined, citing his religious convictions. Soon thereafter the LGBT lobby began its campaign of intimidation. However, the movement isn’t very representative, most people engaged in the LGBT lifestyle are content to quietly pursue their understanding of happiness without trampling on the long established religious convictions of others or marching in a lurid mob. But, like all radical political movements the object isn’t resolution but perpetual conflict necessitating organization, leading to the accumulation of political power and wealth for the lucky few at the pinnacle. Everyone and everything else is mere cannon fodder.

What is so absurd about all of this is that conservatives and people of faith are not arguing that gay men or women should be sanctioned by the government for pursuing their lifestyle. No one serious argues that a same sex marriage couple should be denied a wedding cake. All that is being argued is that the preferences of a member of the LGBT community should not be imposed by the extensive and coercive power of the government, in contravention of a citizen’s sincerely held religious conviction.

Perhaps, the LGBT community could be imposed on to bake its own cakes? Should a Jewish baker be required by court order to provide cakes for a neo-Nazi group celebrating Adolf Hitler’s birthday? Should a halal butcher be forced to provide pork if the members of his community demand it? Should a black clergyman be compelled to participate in the marriage of Ku Klux Klan members? All of these examples are absurd but these examples follow logically from stated LGBT ideology. The LGBT movement is just another tool in the tool bag of the radical left, who relentlessly pursue the transformation of American life and politics.

What Indiana’s Religious Freedom Restoration Act does is bring governance back into parity with the original and plainly communicated intent of the framers of the Constitution. It prevents the tyranny of the special interest and provides a bulwark for everyone who cares deeply about their faith. The LGBT movement howls for the destruction of the mechanisms of tolerance and demands that more government be erected in its place. Historically, the State has not been tolerant of sexual practices that it deems degenerate. From Hitler, to Stalin, to the current rabble of Middle East monarchs and mullahs, homosexuality was and is a capitol offense. YouTube is replete with videos of ISIS operatives making sport of homosexuals by throwing their bound and kicking bodies off of high towers. The old adage is true here, “be careful what you wish for.”

The LGBT community seeks its own destruction by agitating for special rights because it must evoke the insatiable powers of government to impose its agenda. Every gay citizen is blanketed in the same civil rights as every straight citizen. Except where the state’s interest in sanctioning marriage between procreating couples is overwhelming and where even nature objects to the unnatural union between same sex couples. Gay couples are free to cohabitate, pursue a career, or engage in whatever course of action they deem most conducive to their happiness, free from the interference of government and with every Constitutional protection afforded to every other citizen. To demand that the state enact practices that are destructive of the most basic unit of the civil society is not to demand an equal right but to make demands for special consideration. To add to their infamy, the LGBT community demands that long standing religious beliefs be cast aside to suit their whim when other alternatives are close at hand. The LGBT community tantrums over the policy equivalent of “no shoes, no shirt, no service.” Service may be had but not on unlimited terms.

In the name of equality and liberty the LGBT militants seek to impose their tyranny on people of faith and on any who have the temerity to vociferously oppose their perverse agenda. And, all of this based on their irreconcilable opposition to the laws of nature. Those who abide by the laws of nature are not obliged to concede to those who choose to live contrary to those laws and contrary to The Great Legislator. You can’t have your cake and eat it too.