Indispensable Men: Gunslingers In An Age Of Rabid Jihadists 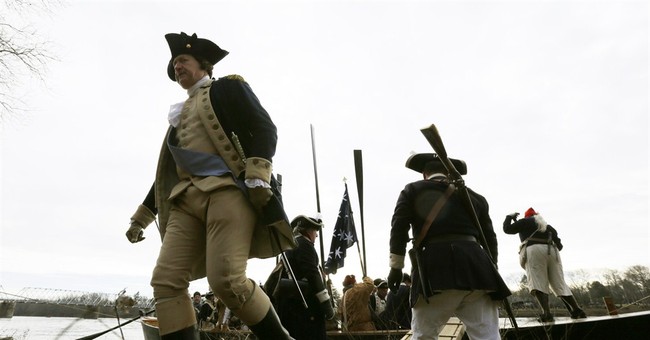 The original indispensable man, General George Washington famously said, “I have heard the bullets whistle, and, believe me, there is something charming in the sound.”(from a letter to his brother May 31, 1754) Manly statements like Washington’s shock the conscience of pajama boy liberals who are only likely to hear the whistle of steamed milk. But, in this era of prehistoric Islamist barbarism, maniacal race mongering, and wanton criminality, the soldier, the cop, the armed citizen—21st century gunslingers—are our indispensable men.

The Sydney hostage incident serves as a poignant example of why skilled men-at-arms are critical to the preservation of a free republic. Sydney also serves to debunk militarization accusations which are in vogue among America’s vapid, manicured class. A muslim, Man Haron Monis, entered a cafe in Sydney, Australia last Monday, December 15th. “Sheik” Monis then began a siege that would end 17 hours later in his death and in the death of two hostages. Katrina Dawson and Tori Johnson were the two victims killed during the incident. Sadly, these two people illustrate both courage and selflessness, but also the futility of the anti-gun sentiments of the American left.

Tori Johnson, unarmed, attempted to wrestle Monis’shotgun from him at approximately 2 a.m. During the struggle, Johnson was fatally wounded. Australia’s strict gun laws did nothing to dissuade Monis from his jihadist rampage nor did it deprive him of access to a firearm. The laws only served to place Tori Johnson at a fatal disadvantage. In fact, “gun free zones”only create human turkey shoots. Barack Obama declared imperiously, after the Sandy Hook tragedy, that stricter gun laws (i.e. an assault weapons ban, registration, and eventually confiscation) could be justified if one life could be saved as a result. Conveniently, the American left never seems to acknowledge that guns most often save lives, thwart violence, empower women, and provide people like Tori Johnson with a fighting chance against evil men bent on murder.

The simple truth is that a gun is merely a tool. The person who intends to murder will pull something—anything—out of the toolbox of human depravity. The gun is a noble instrument in the hand of a law enforcement officer or in the grip of an American serviceman. The gun is a jovian instrument of power in the possession of the citizen. While it becomes a villain in the hand of the wicked, an evil whose only true ward is the proverbial “good guy with a gun.”

Katrina Dawson, mother of three and a successful lawyer, died because she was unarmed. Heroically, she attempted to shield a pregnant woman from “Sheik” Monis’ murderous hail of shotgun pellets. Reportedly, she died of a heart attack on the way to the hospital. We’ll never know if she could have defended herself with a gun and saved herself and others. She certainly possessed an indispensable spirit. She was forsaken to the whims of a barbarian and disenfranchised of the power to stop the depraved aggression of a terrorist impelled by the misogynistic madness of Mohammedanism. Dawson is another victim of big government, proffering the lie that arms are irrelevant and anachronistic in a civilized society. Well, as Dawson’s death demonstrates, civilized society is never really civil. The Devil is in all of us.

Not so many years ago, the American people were defined by an ethos of rugged individualism; the idea that all one requires is equality before the law, the rest is a matter of personal responsibility. Men were confronted with violence and dealt with it directly, on the spot. It was expected, prepared for, and viewed as a right of passage. However, this idea is inimical to the Democrat party’s peddling of dependence politics. Everyone loves the big government Santa Clause when he’s handing out Obamaphones, but when the goblins come, you’re on your own until the calvary arrives to save your bacon. Even with a “militarized”SWAT team standing just outside, unless you have the means to defend your life with deadly force, all that “military”power hovering in tension across the threshold will do you no good. In a gun fight, seconds are an eternity and poor Tori Johnson learned that the hard way.

Coffee houses in America, like Starbucks, may not like guns but, as strange as this may sound, manically deranged, homicidal Muslim terrorists don’t really care that Howard Schultz thinks that guns are uncivilized.

In Sydney, the SWAT response was unequivocal and effective. It’s almost amusing that the “militarization”debate in this country is most often carried forward by those who spend their mornings fretting about which silk tie to wear instead of by those who have to decide whether to carry a fifth or sixth magazine in case things really get sideways. Maybe, it ought to be a prerequisite to entering this debate to require pundits to confront a shotgun wielding jihadist while only wearing a t-shirt and boxer shorts? An appreciation for body armor, and lots of it, will quickly form. If you’re a hostage, you’re hoping the good guys roll in on M1A1 Abrams main battle tanks and blow the bad guy to atoms. From the wrong end of a shotgun, the “militarization”debate becomes a laughable absurdity. What the pundits lack is perspective, and hot lead quickly and efficiently imparts proper perspective.

Finally, Sydney is an example of a metastasizing Islamophobia. Australia’s Prime Minister, Tony Abbott, seems to feel the same sense of queasiness that Barack Hussein Obama does when dealing with the issue of Islamo-terrorism. For common sense Americans, the math isn’t very hard. “Sheik”Monis publicly avowed allegiance to ISIS and even forced a hostage to hold up the black flag of ISIS terrorist oppression. Monis’intent was to commit the hostage taking for terroristic purposes. That makes him, what Obama and Abbott will vociferously deny, a terrorist. During the recent ax attack on NYPD officers, Commissioner Bill Bratton set the logical standard for defining terrorist attacks. Commissioner Bratton defines an act of terrorism with reference to the perpetrators “intent.”If the perpetrator intended the action to be terroristic then it is an act of terrorism. This definition is eminently logical but defies the Obama administration’s political narrative. Therefore, terrorists like Nidal Hassan, who perpetrated the Fort Hood terrorist attack, continue to be treated merely as criminals and the attack is marginalized as “work place violence.”

Terrorism is a uniquely Muslim issue. No amount of equivocation or obfuscation from the sympathetic Obama regime can change this profoundly embarrassing fact. No amount of propagandizing or infiltration from front groups like the Council on American-Islamic Relations (CAIR) can white wash the buckets of blood that stain Muslim hands. Moderate Muslims busy themselves by perpetrating a bloodless jihad of influence that seeks to introduce the prehistoric sharia law, which contains no conceptualization of inalienable rights. By dribs and drabs, the edicts of Muhammad worm their way into American life, law, and politics. It is totalitarian in nature and, so, finds warm kindred in Obama and in his Chief of Staff, Valerie Jarrett, who just so happens to claim Iran as her nation of nativity. The difference between the Moderate Muslim and the extremist jihadist is merely one of timing. The moderate does not see violence as currently productive.

Indispensable men and women are now most needed, to bear arms and stand in the gap. Islam is at war with the world whether we like it or not, whether we are aware of it or not, regardless of the kind and inclusive intentions of soft-skulled liberals. Because of Obama’s sympathetic weakness, the war on terror is now being fought in our streets, in our places of business and worship, in our coffee houses—in those places where Americans traditionally have sought solace from the barbarities of the third world. America’s gates have been thrown wide in an act of retributive self-immolation. Obama’s brand of change has always been about payback and parity. His is a philosophy of lilliputians obsessed with brining a giant to heel. Will the giant awake, as of old, to cast off the bands of tyranny—regulations, executive orders, and memorandum slithering and coiling like so many hundreds of strangling serpents? The noose is about our necks and every step “forward for America”is one closer to the trap door of the gallows.