Alton Nolen and the Theology of Decapitation 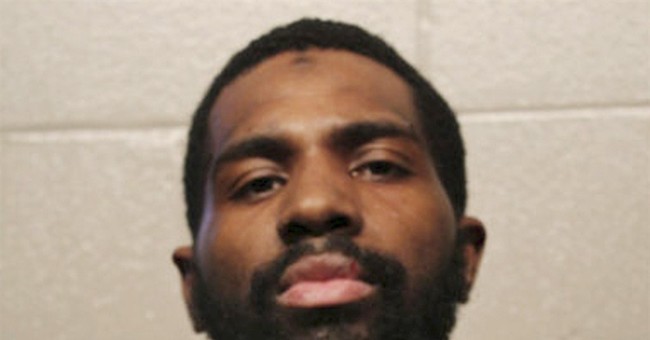 Alton Nolen is a Muslim. Nolen is also a murderous butcher. Last Thursday, September 25th, in Moore, Oklahoma, Nolen walked into the Vaughan Foods Processing plant and attacked two women with a knife. Attacking from behind, Nolen stabbed and beheaded Colleen Hufford.

While the politically correct crowd scorches their collective grey matter attempting to decipher the patently obvious, the rest of common sense America understands that Nolen is a terrorist and committed an act of terrorism. Why do most people come to the right conclusion when elitist government experts can’t? Because average America isn’t bent upon proving a thesis like an addled alchemist combining exotic elements in the perpetually vain attempt to turn fecal matter into gold.

America knows that Nolen’s act was terroristic because he viciously sawed through the neck of his victim until he produced a decapitated head. That’s what terrorists do. Let’s make the analysis simple enough for even an Obama voter to understand: If it walks like a duck and quacks like a duck, it probably is a duck. Islamonazis like Al-Qaida and ISIS decapitate their victims because, among other things, that act of barbarity shocks the conscience and furthers the objective of inculcating paralyzing fear. To ape the tactics of terrorists is to join their ranks.

Terrorists like Alton Nolen are inspired by a theology, a particular practice that the Quran gleefully celebrates. The Quran is a rambling piece of literature that is bound to the history and culture that produced it. Instead of being timeless, it is forever a child of Mohammed and of his epoch. The Quran states unconditionally: “Now when ye meet in battle those who disbelieve, then it is smiting of the necks until, when ye have routed them, then making fast of bonds; and afterward either grace or ransom till the war lay down its burdens…” Muhammad 47:4 This is a theology of decapitation and is orthodox, a characteristic of world-wide terrorism.

The uneducated often make comparisons to the Holy Book of Christendom, the Bible. However, one essential difference is the Biblical concept of covenant. Leviticus is a book that is often cited by people who attempt to compare the brutal aspects of the Quran. But, when understood in the light of covenant, it becomes clear that God’s commands with regard to Israel’s conquest of the Promised Land, dietary requirements, temple worship, and a litany of other commandments and proscriptions were given specifically to the nation of Israel for a specific time; the bounds of which were described by explicit covenants. This is partly why the Bible is timeless and the Quran is not. God’s covenant with us today is embodied in Christ and the New Testament. This is also why Christians do not advocate spreading their faith with the sword as Mohammedans do: “When thy Lord inspired the angels, (saying): I am with you. So make those who believe stand firm. I will throw fear into the hearts of those who disbelieve. Then smite the necks and smite of them each finger.” Surah 8:12 The Quran equates Allah’s justice with the beheading of the nonbeliever. Period. There is no concept of a covenant relationship in the Quran and this leads to the problem of universal application.

Alton Nolen would also have brutally murdered Traci Johnson if his maniacal rampage had not been ended by Mark Vaughan, the Chief Operating Officer of Vaughan Foods Processing and a reserve Oklahoma County deputy. Vaughan retrieved his firearm and shot Nolen. When an unstable personality is actuated and excited by the dogma of terrorists and engages in brutal murder, the only appropriate response from free men and women is lethal force. The old adage “never bring a knife to a gun fight” is given new life in this circumstance. A totalitarian administration can legislate the firearm right out of your hand but the same neatly composed legislation set in government typeface on heavy bond paper does nothing to deter the knife-wielding, homicidal, jihadist. Never bring a piece of paper to a knife fight. The only sure antidote for terrorism is a prescription for 230 grains of lead at 950 feet per second. Repeat the dosage as necessary.

Nolen’s victims were both female. And, females stand the most to gain or lose from legislation affecting the exercise of Second Amendment civil rights. It is no coincidence that the Islamonazi brutalizes women and that Nolen chose to attack what he perceived to be objects of subjugation and abuse. In a nut shell, free citizens possess and carry firearms, serfs, slaves, and victims do not.

However, none of this fits Barack Hussein Obama’s narrative and that is why Nolen’s act of terrorism is classified as “workplace violence.” Just like the Fort Hood terrorist attack, the facts don’t fit the political fairy tale; so the administration, with the dutiful assistance of the main stream media, fabricate a different label out of a tissue of fantasy. Many Americans are too busy keeping up with TMZ and Dancing With The Stars to notice the difference. But, the barbarians are here and are perfectly happy with the nonchalance of the Obama administration. It’s so much easier to kill, plunder, and make gruesome trophies out of human heads when the real cause of the violence is ignored for the sake of political expediency.