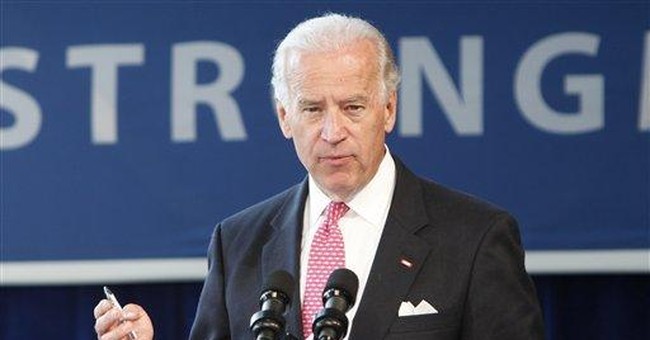 A follow-up to Monday's item on Vice President Joseph R. Biden Jr. and whether his so-called indiscipline and frequent gaffes have strained his relationship with President Obama.

This columnist was on hand at the National Building Museum to hear Mr. Biden assure the Sons of Italy Foundation that what pours from his soul - sometimes carelessly - is "pride and passion."

That's how the National Archives is describing 32 million legal and illegal immigrants who have arrived in the United States since 1944, whose alien case files, originally scheduled for disposal, are now to be officially transferred Wednesday from the Department of Homeland Security's Citizenship and Immigration Services to the National Archives.

Commonly called A-files, the records contain photographs, letters, birth certificates, health records and visas - all of which are considered key to unlocking the stories of millions of people who traveled to the United States in search of opportunity.

Meanwhile, there is a new agreement authorizing Homeland Security to send A-files to Archives when 100 years have passed since the date of birth of the subject in a file.

Like California Gov. Arnold Schwarzenegger before him, Arizona Sen. John McCain has now been cleared of complaints filed with the Federal Election Commission purporting that he violated "soft money" prohibitions.

The Senate Majority Project and the California Democratic Party had charged in their complaints that Mr. McCain, the 2008 Republican presidential nominee, permitted his name to appear on invitations to fundraising events for two state candidates. The invitations purportedly included contribution solicitations in excess of the federally allowed limit and from federally prohibited sources.

"One complaint also alleged that Schwarzenegger aided and abetted McCain in the purported violations," according to the FEC.

Having earlier dropped the charges against Mr. Schwarzenegger, the commission has voted 4-2 to dismiss the case against Mr. McCain.

It's not every D.C. public high school that welcomes the first lady of the United States - Michelle Obama, in this case - to deliver the commencement speech to its graduates.

The Washington Mathematics Science Technology Public Charter High School, established in 1998 to provide students with a rigorous education of integrating mathematics and science instruction with technology, is not your average D.C. public school.

At Wednesday's ceremony, Mrs. Obama will present diplomas to an astonishing 99 percent of the student body, with every one of the graduates accepted to two- or four-year institutions.

Comparably, according to Education Week, the nation's capital in 2008 ranked 47th (out of 51) nationally for its public high school graduation rate. But that rate is improving dramatically. D.C. public schools graduated 70 percent of high schoolers in 2008, compared with only 57 percent in 2005.

Should our judges be judged by their gender,

Or the justness of verdicts they render?

Should we reckon their race,

Or their ken in a case

As a strict Constitution defender?