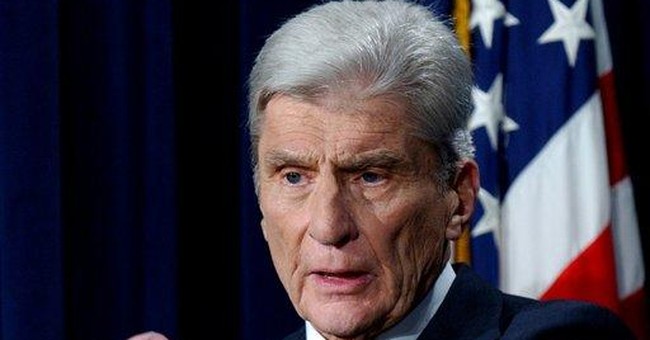 It is indeed unusual to bump into recently retired five-term Virginia Republican Sen. John Warner and have him hand you his business card:

"I've not practiced law since I was appointed secretary of the Navy 37 years ago. It's good to be back," the 82-year-old Mr. Warner tells this columnist.

A veteran of World War II (he enlisted before his 18th birthday) and Korea, Mr. Warner graduated from Washington and Lee University and later studied at both the University of Virginia and George Washington University law schools, earning his law degree in 1953.

He became a law clerk for the U.S. Court of Appeals, rose to assistant U.S. attorney, and later worked in private practice. He was appointed Navy secretary in May 1972 and served in the Senate from 1979 until this past January.

Wonder what is the latest special-interest legislation to fill the congressional agenda? Look no further than the bowels of the Capitol South Metro Station, served by the orange and blue lines, and practically a stone's throw from the dome of the U.S. Capitol.

"People who live in Washington are constantly bombarded by media promoting the agenda of one group or another," observes city historian John Lockwood. "Of course, the lobbyists' productions are aimed at just 535 people sitting in the House and Senate, with the teeming millions of everyday Washingtonians serving as mere spectators."

But Mr. Lockwood tells Inside the Beltway that he recently noticed one particular high-intensity source of lobbying material, and it's not television, radio, newspapers or magazines.

It's a subway station - Capitol South," he says. "Although I doubt that many members of Congress mingle with the masses down there, presumably some do. This strategically located station is usually plastered over with lobbyists' posters - on the walls and even on the floor.

"Yesterday, while going to the Library of Congress, I counted a couple of dozen posters denouncing a 'performance tax.' I have not seen this sensory overload at any other station."

Looks like man-made "global warming" isn't living up to the speculation and hype that an increase in air and water temperatures generates more hurricanes. In fact, forecasters at Colorado State University are predicting only six Atlantic hurricanes will form this summer and autumn, fewer than normal.

This means Americans in the eastern half of the country can expect hurricanes Ana, Bill, Claudette, Danny, Erika and Fred.

On another stormy note, members of Congress were briefed in recent days by real-life hurricane hunters from Keesler Air Force Base in Mississippi, all of them military reservists who regularly fly through the "eyewall" of storms to collect data.

"Last year, we flew into the eye of a hurricane 162 times, and that's not counting the smaller storms," noted Air Force Maj. Chad Gibson , the 403rd Wing chief of public affairs, who with Brig. Gen. James R. Muscatell, 403rd Wing commander, briefed more than 60 congressional members and staffers from the Senate and House.

In his closing remarks of his recent commencement address at Old Dominion University in Norfolk, former journalist and presidential adviser David Gergen, who heads the Center for Public Leadership at the John F. Kennedy School of Government at Harvard University, resorted to lyrics from the Oak Ridge Boys to humorously send off the new graduates to their futures:

"You don't have to go home but you can't stay here."