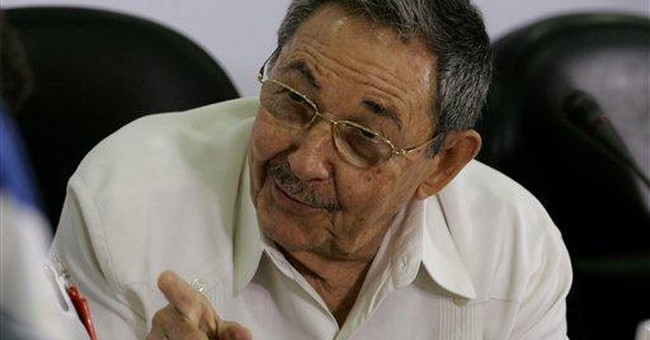 In defending President Obama's easing of U.S. policy towards Cuba, Sen. Richard J. Durbin, Illinois Democrat, remarked this week: "I had some friends who recently went to Cuba, through Mexico, with a visa. They came back and said, 'You know, they are still using oxen for power in their agriculture.'

"Yoking oxen, in the 21st century, 90 miles offshore from the United States?" Mr. Durbin noted. "If they knew and could see what modern agriculture could bring to them ... we would have a greater chance of bringing real 'change' to Cuba."

Tread carefully, senator. Those oxen for centuries have helped grow the finest cigars in the world.

Once upon a recent time, Americans said they couldn't live without certain household appliances.

Now, no longer do substantial majorities say a microwave oven, television set, or even an air-conditioner is a necessity.

"Instead, nearly half or more now see each of these items as a luxury," Pew Research finds when comparing surveys take in 2006 to 2009. "Similarly, the proportion that considers a dishwasher or a clothes dryer to be essential has dropped sharply since 2006."

All told, 8 out of 10 adults have taken specific steps to economize during the current bad times, including shopping in discount stores and passing up name brands. Americans are also cutting back on alcohol and cigarettes, and reducing spending on cable or satellite television service, or canceling the service altogether. Same goes for cell phone plans.

Finally, 1 in 5 adults "are following the example of first lady Michelle Obama and are making plans to plant a vegetable garden to save money on food."

The shocked leaders of this nation have now declared the terrorist interrogation technique known as "waterboarding" to be cruel and unusual punishment.

That being the case, one congressman, equipped with none-too-pleasant photographs, took to the floor of the House this week to remind Americans what cruel and unusual punishment really looks like.

"This first one is the Pentagon of the United States. Several hundred people were killed," began Rep. Dan Burton, Indiana Republican. "This here is the World Trade Center. More people were killed in this attack than any attack in the history of the United States by an enemy. Even the attack on Pearl Harbor didn't even come close to this, although that was a terrible thing as well.

There were more candid shots, but you get the picture.

We figured the invitation was from the National Confectioners Association: "Please join us at our sweet, new offices in Washington, D.C."