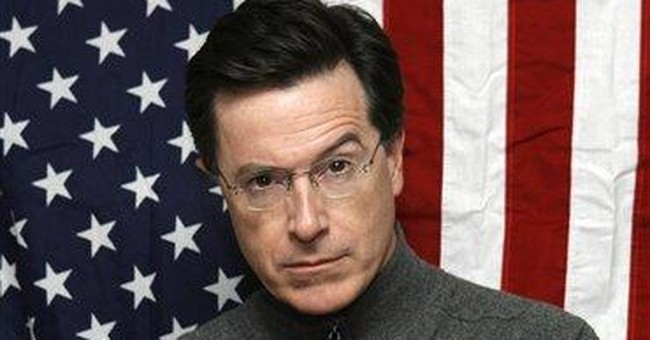 Amid concern that younger generations are getting the "news" from cable TV comedy shows, NASA has chosen Comedy Central's "The Colbert Report" to announce tonight the name of the space agency's newest module for the International Space Station that will provide room for many of the space station's life support systems.

The name, which NASA says will not be publicly released until after the program airs early this week, was selected from thousands of suggestions submitted by the public on NASA's Internet site. That said, comedian and host Stephen Colbert took interest in the census and urged his followers to post the name "Colbert."

"I certainly hope NASA does the right thing," said Mr. Colbert. "Just kidding, I hope they name it after me."

Bill Gerstenmaier, associate administrator for Space Operations at NASA Headquarters in Washington, said the poll "took on a life of its own."

"We received more than a million entries, in large part because social media web sites and television programs, such as the Colbert Report, took an interest. This spread overall awareness of the International Space Station."

NASA astronaut Sunita "Suni" Williams was to appear on the Colbert Report to help make the announcement.

The X-Conference, the annual gathering addressing the politics and implications of the UFO/ET issue [-] as in extraterrestrial life and the crafts they fly [-] kicks off in and around Washington on Friday.

"The movement seeks the formal acknowledgement by world governments of an extraterrestrial presence engaging the human race," according to organizers.

Among the 2009 speakers: Apollo 14 astronaut Edgar Mitchell, who in 1971 became the sixth man to walk on the moon, although the astronaut says the most extraordinary moment of the mission was experienced during his return to earth.

Here's one description of that moment culled from Mr. Mitchell's speaker's bio: "As he hurtled earthward through the abyss between the two worlds, Mitchell became engulfed by a profound sensation [-] 'a sense of universal connectedness.' He intuitively sensed that his presence, that of his fellow astronauts, and that of the planet in the window were all part of a deliberate, universal process and that the glittering cosmos itself was in some way conscious. The experience was so overwhelming Mitchell knew his life would never be the same."

Or as the MIT and Carnegie Mellon University-educated astronaut put it: “We went to the moon as technicians, we returned humanitarians.”

The White House and the Family Equality Council wants the world to know that homosexual and transgender heads of families and the children they are raising participated in Monday's White House Easter Egg Roll.

Still no official head count on the number of such unique families that hunted for eggs on the White House grounds, but in 2006 more than 100 such households were in attendance and organizers were touting the same number, if not more, on Monday.

"[B]ut this time the White House has specifically encouraged them to participate in this time-honored event," the council noted, adding that President Obama last year became the first presidential candidate to openly affirm the equal value of "LGBT" (lesbian, gay, bisexual, and transgender) families in an August 2008 letter to the council's executive director Jennifer Chrisler.

Mr. Parker, who also worked for a Fortune 15 corporation, divides federal employees into four categories: "Idealists" (those who believe that they and only they can solve society's problems); "Clock-punchers" (former idealists who have become cynical and are going through the motions); "Hangers-on" (bureaucrats who have reached their career plateau and are hanging on until retirement; and "Power seekers" (those who will do anything without a shred of concern for the public good).

The book has 250 titled chapters, each enlightening. Our favorite, given title of this column, is "Beltway, Inside The."

"Also noteworthy," we read in the chapter, "Washington boasts the highest concentration of shrinks per capita of any other major U.S. city . . . . One good thing: their benefit package pays the tab."