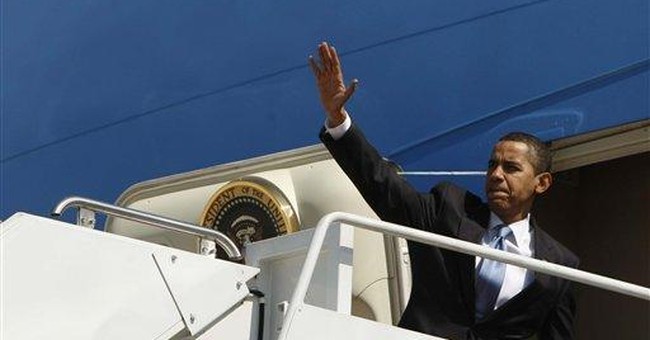 America's No. 1 nationally syndicated columnist (now appearing in more than 550 newspapers) Cal Thomas tells Inside the Beltway: "I've had a lot of things happen while flying, but this morning was a new one."

"We were delayed on a Delta flight from Atlanta to Ronald Reagan Washington National Airport for more than 90 minutes," Mr. Thomas told us Wednesday. "The reason was that the captain had left his I.D. at home. He called his wife. She drove to the airport and gave it to him.

"He was extremely embarrassed and said in all his years as a commercial pilot and, before that, in the Air Force, this was the first time he had ever done such a thing. Then he announced on the PA system, 'I'm going to say something you'll never hear in Washington: I screwed-up.' Much laughter followed."

April's "Harper's Index" is filled with intriguing trivia, especially for those of us who make our home in the nation's capital: "Percentage of Americans born in Washington, D.C., who still live there: 13."

Now, get a load of this pair of not-so-pleasant facts:

Obviously, if he's going to talk so much on the telephone, somebody in government should insist that Mr. Clinton enroll in one of those less-expensive "friends and family"-style phone plans.

"Women Taking the Lead to Save Our Planet."

Or such was the title of the recent State Department forum, the featured speaker Secretary of State Hillary Rodham Clinton.

It's starting out as a bumper year for bumper stickers, what with everything coming unglued in this country.

One of the more popular bumper stickers, glued mostly to Republican-owned vehicles: "So, how's that 'hope' and 'change' working out for you?"

Otherwise, we're not quite sure what to make of the bumper sticker (he actually forwarded an entire stack to Inside the Beltway) sent to us by Washington-area attorney David I. Bledsoe: "I for one welcome our new Marxist overlords."

"I know that it would mean so much to him to have them both back as part of the Reagan team, especially during this important time of growth for the foundation," former first lady Nancy Reagan said in making the announcement.

Mr. Olson, who was U.S. solicitor general under former President George W. Bush from 2001 to 2004, continues to hold the record for presenting the most cases before the U.S. Supreme Court. And he's not slowing down any. He told Inside the Beltway this past weekend that he still leaves for work every morning at 5:30.

So, are you presently reading this column on printed paper or via the Internet?

The Pew Research Center's Project for Excellence in Journalism says when it comes to obtaining the latest news, audience migration to the Internet is rapidly accelerating.

"The number of Americans who regularly go online for news jumped 19 percent in the last two years," says Pew. "In 2008 alone, traffic to the top 50 news sites rose 27 percent."