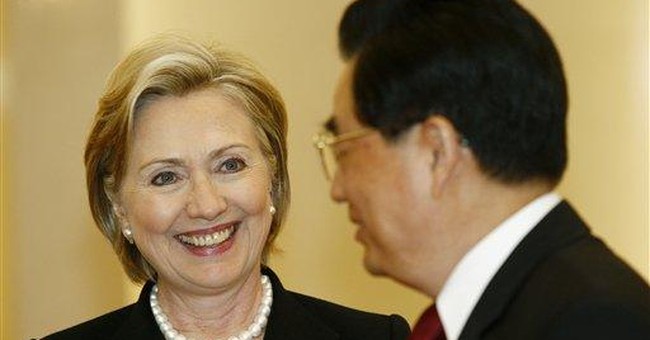 The Democratic National Committee has a new political director, Clyde Williams, who previously served as senior policy adviser at the community-minded Clinton Foundation, vice president of the Center for American Progress (a think tank dedicated to exposing "the hollowness of conservative governing philosophy") and deputy chief of staff at the Agriculture Department.

Mr. Williams, who of late was running a business development firm in New York City, says he looks forward to strengthening the Democratic Party while advancing President Obama's agenda.

As for the future of the Republican Party, David Keene, chairman of the American Conservative Union (ACU), is on tap to deliver a Tuesday address to the National Press Club, discussing "the state of conservative activism" following the 2008 elections, previewing the Conservative Political Action Conference (CPAC) that begins Thursday, and unveiling ACU's annual ratings of Congress.

The latter is considered the gold standard for matching the conservative rhetoric of congressmen and senators against their records. Just for kicks (after all, they've taken control of Washington), Inside the Beltway takes a look at the ACU lifetime ratings for today's top Democratic leaders, rated on a percentage scale of 1 to 100:

A correction was issued over the weekend by Americans for Limited Government (ALG), one of several news outlets and Internet blog sites duped by erroneous information:

"ALG News reported, mistakenly, that the new CIA Director, Leon Panetta, had a daughter that was associated with the dictators of Venezuela, Hugo Chavez, and of Nicaragua, Daniel Ortega. In fact, as reported by Accuracy in Media, Mr. Panetta has no daughter."

It's doubtful that newly appointed CIA Director Leon Panetta, the father of three grown sons, was surprised by the sloppy reporting of a rumor that he has a daughter who likes to hang out with Latin American dictators.

During one of his more recent trips to Washington as head of the Panetta Institute for Public Policy, the former congressman-turned-White House chief of staff under President Clinton remarked to this columnist that back home in California he still enjoyed tending to his family's walnut orchard.

"When I was first elected to Congress, my father said I was perfectly suited for Washington because I've always worked around nuts," he pointed out.

Fears of nationalizing major banking institutions aside, "a potential legislative gun rights battle is looming in Washington," warns John Snyder, spokesman for the Citizens Committee for the Right to Keep and Bear Arms and treasurer of the Second Amendment Foundation.

"When President Obama submits his budget blueprint in the near future, the proposal may include language designed specifically to repeal the Tiahrt Amendment," Mr. Snyder says. "This repeal is an action long sought by gun-grabbing politicians, the anti-gun Brady Center to Prevent Gun Violence and other extremist groups."

Named for Rep. Todd Tiahrt, Kansas Republican, the amendment prohibits third-party use of federal gun-trace data when lawsuits are filed against the firearms industry.

This followed a 24 percent rise in December and 42 percent jump in November, when a record 1,529,635 background checks were performed.