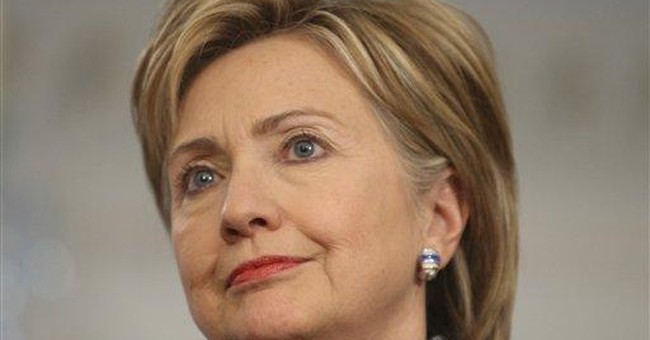 It was just over a year ago that conservative blogger Matt Margolis filed a formal complaint with the Federal Election Commission surrounding questionable fundraising practices by then-Democratic presidential candidate Hillary Rodham Clinton.

The complaint dealt with a $380,000 "cooks and dishwashers" fundraiser in New York, which sought campaign contributions ranging from $1,000 to $2,500. As Mr. Margolis pointed out, there was at least one donor who admitted to being an illegal immigrant, while another claimed she was illegally reimbursed for her contribution.

Talk about reaction to our interview this week with former judge Robert Bork, the one-time acting attorney general nominated to the Supreme Court by President Reagan.

Yes, some readers had forgotten that the former Yale Law School professor had opportunity to instill legal wisdom in a young radical-minded student named Hillary Rodham-soon-to-be-Clinton. Mr. Bork stressed that "she was in the room. I don't claim any credit for her development."

Most, however, wished to applaud Mr. Bork's argument that "the martini is a drink that is much abused - everybody's making chocolate martinis and apple martinis, and so forth. And it's the kind of thing that has to stop. The integrity of the martini is essential."

"I'm a Las Vegas bartender, and I happen to agree with Judge Bork on martinis," writes Mike Niederberger. "Although I don't drink 'em (I prefer an 18-year-old Irish whiskey or a Scotch), I am a martini purist. There is only one martini, and it's made with gin (your preference) and a splash of dry vermouth with three olives.

"The way I make 'em is, swirl about a half-ounce of dry vermouth in a chilled martini glass so you get the essence of the vermouth. Pour about 4 ounces of Bombay Sapphire in a cocktail shaker filled with ice. Shake vigorously and strain into the chilled martini glass; add three olives on a pick.

"All these other goofy 'martinis' are nothing more than glorified cocktails served in a martini glass. End of story."

That was Hollywood actor Ted Danson on Capitol Hill on Wednesday lobbying members of Congress to reinstate an offshore-drilling moratorium that lapsed last year.

The bartender of the classic TV sitcom "Cheers" was heard to argue that "oil and water simply don't mix."

Former forest ranger (as a young man) John D. Dingell is making headlines by becoming the longest-serving member in the history of the House of Representatives, the Michigan Democrat having assumed his seat in 1955 at age 29 after the death of his father, the incumbent congressman.

Ever since, whenever Mr. Dingell's name has appeared in print, it more often than not is preceded by "liberal," albeit not in the traditional sense that he's unwilling to listen to the other side.

Just over three years ago, this columnist saw fit to quote the congressman after President Bush's 2006 State of the Union address, which he actually praised as "balanced."

"After years of divisive rhetoric, he spoke like a man wanting to work with the opposition," Mr. Dingell noted. "It is now my hope that these words are matched with deeds; if they are, I will be happy to work with him."

Mr. Bush, of course, is now in Texas. Mr. Dingell has begun working with his 11th president.

"Teen Expelled for Bringing Gun to School," "Should the Death Penalty be Allowed in Montana?" "Dead Dogs and Screaming in the Woods."

Those are three of the latest headlines in the Flathead Beacon, a weekly tabloid newspaper published in Kalispell, Mont. (where this columnist got his journalism start so many years ago), funded no less by D.C. native/TV personality Maury Povich, who with his wife, former CBS anchor Connie Chung, are 10-year residents of the surrounding Flathead Valley.