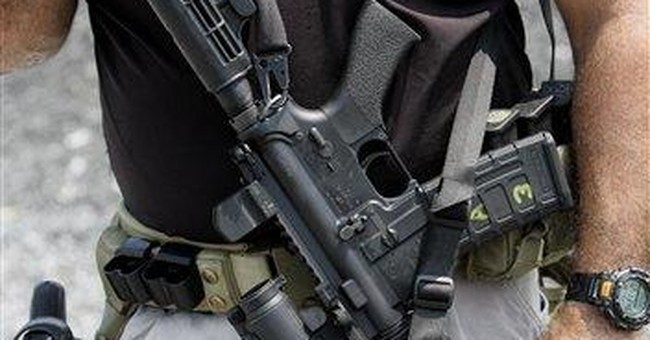 A hundred yards beyond the orange-and-white chopper, green smoke pours from a bombed-out vehicle carrying an American diplomat, who lies injured on the ground. Within seconds, a security team in three four-wheel-drive vehicles speeds in reverse to rescue the official and his entourage.

In the distance one hears the fire of semi-automatic M-4 Carbines — today's weapon of choice in the war against terrorism, although Mr. Prince labels the box-cutter "the most cost-effective weapon in history" — and from behind a stand of trees the reverberation of more powerful munitions.

This, I come to realize, is a typical morning at Blackwater Worldwide's 7,000-acre headquarters and training facility in the Great Dismal Swamp of North Carolina. Here on any given day training is provided to 750 people — 35,000 per year.

Founded by Mr. Prince in 1998, Blackwater has provided instruction to virtually every branch of the U.S. military (not to mention America's allies), including 135,000 U.S. Navy personnel, 8,000 U.S. Coast Guardsmen, even cadets of West Point.

"We fill the gaps," explains the 39-year-old Mr. Prince, a former Navy Seal whose title is chairman and CEO of Blackwater. A graduate of Hillsdale College (his Michigan family previously owned the automobile-parts manufacturer Prince Corporation), he equates Blackwater's emergence to FedEx, which "evolved due to the lack of capabilities and responsiveness of the USPS" [U.S. Postal Service].

"Who do you trust with your overnight package?" Mr. Prince points out.

One Blackwater official put it this way: "When they finally get Osama bin Laden, somebody from Blackwater will be within 50 feet of where he is found."

During my tour of what is the largest private technical training facility in the United States, I encounter SWAT teams from several local police departments and members of the Canadian Armed Forces' elite counter-terrorist/special ops unit — or so I gather from their uniforms.

Needless to say, Blackwater Worldwide (formerly Blackwater USA) has come a long way since it was awarded its first major U.S. government contract following the October 2000 suicide bombing of the USS Cole, which killed 17 American sailors. Life-size replicas of Navy ship hulls float on a lake here, where Blackwater's instructors, many of them ex-military, teach sailors how to thwart future bombing attempts.

Blackwater's primary mission — delivering security, capacity and hope to populations ensnared in conflict — is accomplished thousands of miles from this Carolina swamp. The security firm deploys more than 2,000 civilian contractors in 15 countries — "most places you would not want to visit," notes Mr. Prince — to assist international relief organizations (if indeed they are in place) in providing humanitarian aid, particularly medicine, food and water.

All of which presents inherent risks. In 2004, four Blackwater contractors in Iraq were ambushed and killed in Fallujah, their charred bodies hung from a Euphrates River bridge; and on Sept. 16, 2007, 17 Iraqis in Baghdad were killed by Blackwater when it detected an ambush of a State Department convoy.

As a result of the latter shooting, which remains under federal investigation, Mr. Prince was summoned to Capitol Hill to testify about Blackwater's contracts (reportedly worth more than $1 billion since 2001) with Uncle Sam and what government oversight exists with the security firm's overseas operations.

"We perform no offensive missions," Mr. Prince insists (albeit he concedes Blackwater easily beat the National Guard to New Orleans to airlift stranded victims of Hurricane Katrina). Indeed, he is insulted by accusations to the contrary.

"The irony here is that it is a company that was founded and exists to save lives. Everything done is in the interest of safety: training troops to defend themselves; building armored personnel carriers to keep troops alive in battle; building airships for surveillance to detect the bad guys; teaching cops how to effectively and safely rescue a hostage; helping people in executive-protection roles avoid an ambush in a vehicle; building an aviation division capable of performing rescue missions in war zones and natural disasters. The list goes on.

"My point is that the press quantifies the loss of life, but fails to account for the sparing of life because of Blackwater. In Katrina alone, 128 people were pulled to safety before a contract was ever awarded. In more than 20,000 diplomatic missions, no one protected by Blackwater has ever even been seriously injured."