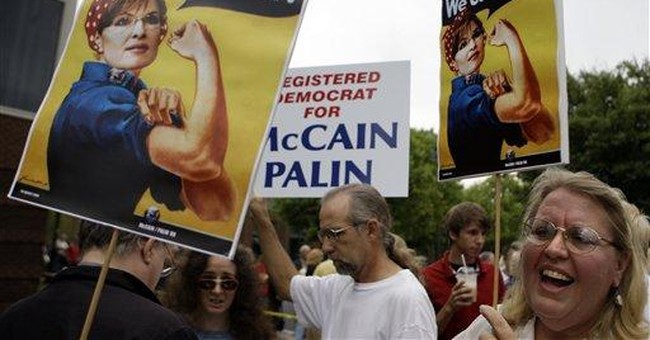 It's that time during an election year when political hooligans from coast to coast roam neighborhoods to steal campaign signs.

"Unfortunately, my 'McCain-Palin' sign was plucked from my front yard, never to be seen again," writes an Inside the Beltway reader from Democrat-heavy Northern Virginia. "Very distressing, since I am surrounded by a sea of 'Barack Obama' yard signs. One would think that resorting to theft would be unnecessary, but I guess not."

She's not alone. In fact, John McCain is finding his campaign signs stolen from his own backyard, so to speak. Arizona resident Mary Crowell, who lives in Tempe, told her local newspaper: "My neighbor recently gave me a McCain-Palin sign to post in my yard. He gave me one piece of advice along with it: that I take it down overnight."

Given workloads and limited manpower, police departments do issue warnings but seldom file criminal charges surrounding the theft or destruction of such campaign materials. A typical yard sign costs a political party about $2.50 to replace.

That said, police in Chambersburg, Pa., recently pulled over two people engaging in suspicious activity and found 22 stolen 'John McCain' signs and two flower pots in the car. Both individuals were taken into custody and their names released to the media.

Martial artist, screen actor, and right-leaning political advocate Chuck Norris tells Inside the Beltway that he is "disenchanted with everyone" in Washington, regardless of party affiliation.

"No one is solving the problem," says Mr. Norris, speaking as a "concerned citizen, and a father and a grandfather. I have seven children and eleven grandchildren, and I'm extremely worried as most people in America are about the direction our country is going.

"Unfortunately many politicians today have ... become disconnected from the will of the people, and that goes for the Republican side and the Democratic side."

Mr. Norris drew attention to the "bloated federal bureaucracy" in calling for a "fair tax," similar to one proposed by his earlier choice for president, former Arkansas Republican Gov. Mike Huckabee.

"I firmly believe that if we had a fair tax in this country, it would help turn the economy around," Mr. Norris said, counting "66,498 pages in the IRS tax code."

"Who in the world knows what's in all those pages? I mean, Charlie Rangel doesn't even know, and he writes the tax code. And he's in trouble," he noted.

Rep. Charles B. Rangel, New York Democrat and chairman of the Ways and Means Committee, is currently under the ethics microscope for failing to disclose and pay federal, state and local taxes on rental income.

Inside the Beltway caught up Tuesday with Noel Koch, a lifelong Republican and Ronald Reagan-appointed assistant secretary of defense and director of planning at the Pentagon, who has become a founding member of Veterans for Obama.

"I've got a 4-year-old grandson, and I want a safer world for him to grow up," replies Mr. Koch, who upon leaving the Pentagon in 1986 became president of Trans Secure, a global security firm based near Washington.

A Vietnam War veteran, who later became a special assistant to Richard Nixon, Mr. Koch has come out against the war in Iraq, labeling it "idiotic."

"John [McCain] insists we have to win this, but he doesn't say what constitutes a victory," he points out. "We've broken our military, wrecked the reserves, we're plowing through our National Guard, and these [troops] are coming back home ... to face malignant neglect, like when I came back from Vietnam.

"We don't have the resources to get through this war, and that's before the financial costs."

Having dealt with terrorism in his Pentagon post, Mr. Koch says U.S. policy once was "you solve the problem by dropping bombs on it. But every time we killed one [terrorist] we created 10 more. I know it's not politically correct to say, but we've got to look at the root causes."

As for now supporting a Democrat for the White House, having been a registered Republican since the late 1950s, Mr. Koch says Barack Obama "shows a steady hand, understands what he wants to achieve, and from the beginning he's made it clear he wants to run a clean campaign."

'End of the Era'? What Is CNN's Don Lemon Going to Do Now?
Townhall
Randi Weingarten welcomes 'new infusion of federal education money' as key to fully reopening schools
Twitchy
Report: Biden Snapping and Losing It in Profanity-Laced Tirades at Staff
Redstate
Legacy Media Finally Calls Out the 'Experts' for Their COVID-19 Misrepresentations
PJ Media