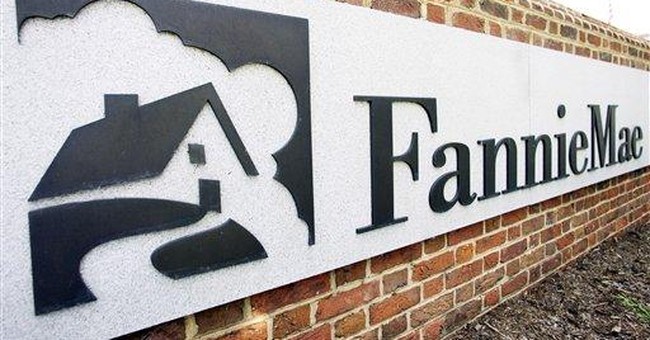 "I live a few blocks from the Fannie Mae building," writes John Lockwood of Northwest Washington. "I was passing by to go to the post office to pick up a letter when I saw that somebody had left in front, right next to the Fannie Mae sign, a homemade 'HELP WANTED' sign."

Washington Capitals owner Ted Leonsis and MSNBC's Chris Matthews were just two of several well-known faces on hand for Friday's YouthAIDS 2008 gala at the Ritz-Carlton Tysons Corner, where emcee Sharon Osbourne took the stage, slid on her eyeglasses, only to announce on second thought:

"If we let that happen, then we'll soon be calling Dick Cheney the second-most dangerous vice president in history."

John McCain and Sarah Palin supporters, we see, have borrowed from the familiar "Virginia is For Lovers" slogan and printed T-shirts, complete with a heart, stating: "Virginia is For McCain-Palin!"

Last week, a Time magazine/CNN poll handed Barack Obama a most impressive (after all, a Democratic presidential candidate hasn't carried Virginia since 1964) a nine percentage-point lead over Mr. McCain, 53 percent to 44 percent, in the Old Dominion.

The priest is angry about Mr. Maher's new movie, "Religulous," and speaks of his personal disgust in a letter to the Irish-America magazine in New York, which interviewed the popular HBO host for its latest issue.

"Even Northern Ireland has not produced worse bigots than Maher," writes Father Mc Manus, who forwarded a copy of his letter to Inside the Beltway. "And the fact that Maher was raised Catholic only makes his ugliness more offensive."

The movie is about Mr. Maher's personal take on organized religion, of which he is no fan.

Not quite, although given all the excitement, campaign buttons and fliers distributed on the brick sidewalks of Old Town Alexandria on Saturday night one has to wonder how many Americans remain undecided about November's presidential election.

The "Dr. Seuss for President" art exhibition - Theodore Seuss Geisel's so-called "secret art" painted for his personal enjoyment over a period of more than 60 years - offers an unusual glimpse into the sociopolitical-minded imagination of one of the world's most celebrated icons of popular culture.

The colorful exhibition, which includes political works on topics like raising taxes on Capitol Hill, is on display at the P&C Art Gallery in Alexandria through the November election.

Latest COVID News from Texas Shows Beto O'Rourke Stepped on a Rake...Big League
Townhall
Drew Holden revisits the media's coverage of that 'conspiracy theory' that COVID-19 leaked from a Wuhan lab
Twitchy
Hey, Mad Maxine Waters -- How Does It Feel to Be the Target?
Redstate
Texas Gov. Greg Abbott Orders a Mandate Against Mask Mandates – And It Gets Better From There
PJ Media