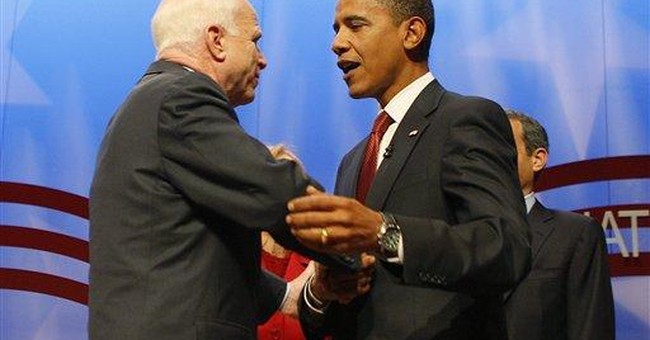 What do Barack Obama and Jack Kemp have in common?

They both attended Occidental College, a small liberal arts school in Los Angeles, which the Republican Mr. Kemp once noted you "can't get out of without learning something."

Ditto for Mr. Obama, the Democratic nominee for president, who says during his two years at Occidental he grew up "after a long hibernation," learning the values of "hard work, honesty, empathy and compassion."

In his commencement speech this past May at Wesleyan University, Mr. Obama said the Occidental community first possessed him "with this crazy idea that I was going to work at the grassroots level to bring about change."

And it was at Occidental, the school recalls in a summary of Mr. Obama's formative years, that the presidential candidate stopped being called "Barry" and became Barack.

It so happens that Republican vice-presidential nominee Gov. Sarah Palin's husband, Todd Palin — a member of the United Steelworkers (USW) union — is funding efforts to defeat and even smear his wife.

National Right to Work Legal Defense Foundation President Mark Mix has informed Mr. Palin by open letter that he does have the right to cut off "forced" union dues being spent by the USW to defeat the Republican ticket of Sen. John McCain and Mrs. Palin.

"While I'm sure you're excited by your wife's candidacy for high office, you may be discouraged to learn that the union dues you pay are already being used to defeat her," writes Mr. Mix, reminding the candidate's husband that when his USW bosses endorsed Democratic Sen. Barack Obama in June they pledged to support his campaign with funds collected from union members.

"In fact, at the USW's 2008 convention, union officials adopted a resolution 'vowing to play a key role in electing Obama,' thus pledging workers' dues to the effort to defeat your wife's candidacy," he adds.

"Moreover, a top USW official whose paycheck you help fund is viciously ridiculing your wife's candidacy on the Steelworkers' Web site, calling Governor Palin's selection 'cynical' and claiming that by choosing your wife 'McCain has clearly shown he lacks the judgment to be president.'"

Mr. Mix says Alaska does not have a right to work law, but under the Supreme Court precedent "Communications Workers v. Beck," employees are able to stop paying forced union dues unrelated to collective bargaining, such as union electioneering.

No, he's not back in Washington to offer any advice to the Washington Redskins, a team he coached to three Super Bowl victories, but National Football League Hall of Famer Joe Gibbs today will be addressing participants of the Family Research Council's 2008 Values Voter Summit, a three-day conference that ends Sunday at the Hilton Washington Hotel.

"Given the billions of dollars at stake, and number of people involved, this is easily the worst instance of government misconduct that POGO has seen."

— Danielle Brian, executive director of the Project On Government Oversight, referring to documented evidence made public this week that employees at the Interior Department's Minerals Management Service accepted gifts, ski vacations and sex from oil and gas industry personnel.

Inside the Beltway reader Stan Welli of Aurora, Ill., writes: "One of the vice president's duties is to preside over the U.S. Senate. He (or she) may vote to break a tie. It's fascinating to visualize the organizational and personal dynamics of a body over which Sarah Palin would preside.

"This would be a Senate having Harry Reid as the likely majority leader. And it would include such familiar names as Joseph Biden, Robert 'I'm old enough to be your grandfather' Byrd, Hillary Clinton, Christopher Dodd, Ted Kennedy, John Kerry and Barack Obama. 'The Senate will be in order and there will be no more moose jokes!'"