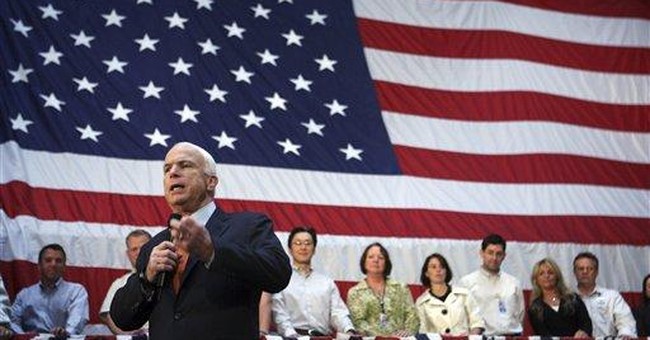 Can't wait for Nov. 4 to find out who will be the next occupant of the White House?

You might not have to, according to Thomas M. DeFrank, Washington bureau chief for the New York Daily News and prior to that senior White House correspondent for Newsweek for a quarter-century. Indeed, this is his eleventh presidential campaign.

"I suspect in another five weeks we are going to have a really good sense of who is going to be the next president," Mr. DeFrank told Inside the Beltway, discussing the contest between Republican John McCain and Democrat Barack Obama.

"It's good news for McCain that he's basically neck and neck with Obama at this point," he said. "But I think Obama and McCain each have four huge opportunities coming up to pull away or mess things up, and the first one of course is their respective vice presidential nominees.

"Then comes the whole hoopla of their conventions; then comes their acceptance speeches at the conventions; and then comes … the first debate in Oxford, Miss., on the 26th of September. And I think those are really four huge benchmarks, and how Obama and McCain handle and negotiate those benchmarks is going to go a long way toward telling us who the next president is going to be."

As for the first hurdle, Mr. DeFrank suspects Mr. Obama will be the first to announce his vice presidential pick, probably next Monday or Tuesday, following his summer vacation. Mr. McCain, he pointed out, said from the start that he would await his opponent's No. 2 selection when "the whole chessboard is in front of us."

"My gut tells me McCain still will wait," said Mr. DeFrank, whose entire interview can be heard on Inside the Beltway radio at www.washingtontimes.com.

When he accepts the Democratic nomination for president on Thursday night, Aug. 28, Barack Obama "will communicate the urgency of the moment, highlight the struggles Americans are facing and call on Americans to come together to change the course of our nation."

So reveal organizers of the Democratic National Convention, referring to the candidate's acceptance speech at Invesco Field at Mile High.

The so-called urgency of the moment is said to encompass everything from the economy, especially the housing crisis and high energy costs, to the war in Iraq.

Missing a Pablo Picasso from your wall?

If so, contact the Federal Bureau of Investigation — FBI Special Agent Jim Wynne, to be exact.

As a member of the FBI's Art Crime Team, Mr. Wynne this week is putting out a reminder of a surprising discovery in 2006: a "treasure trove" of valuable art work found crammed floor-to-ceiling in a one-bedroom New York City apartment following the death of its occupant, William M.V. Kingsland, a mysterious art connoisseur who left no family or last will and testament.

The bureau counts more than 300 works in the collection — paintings and sketches to sculptures — by among other famous artists Picasso, John Singleton Copley, Alberto Giacometti, Giorgio Morandi, and Eugene Boudin.

"Turns out Kingsland was a pretty secretive guy — despite having many acquaintances, very few people had ever been inside his residence," the FBI writes of the case. "William Kingsland wasn't even his given name — he was born Melvyn Kohn and spent his early years in the Bronx before legally changing his name to Kingsland. He thought it had a more literary sound to it and would help him gain acceptance among Manhattan's upper crust."

Shortly after the discovery, several pieces of the collection were determined to have been stolen in the 1960s and 1970s. That's when the FBI was brought in to investigate.

What the bureau calls a "bizarre" side note, the mover hired to transport the contents of Mr. Kingsland's apartment to a warehouse was charged with stealing two Picasso sketches. Nor was it the first time the pair of sketches were stolen.

"Sometime before they ended up in Kingsland's collection they were stolen from a New York art gallery around 1967," the FBI reveals.