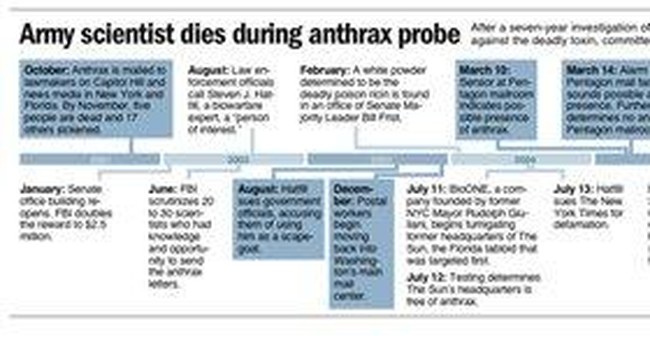 With the apparent suicide last week of Army scientist Bruce E. Ivins, the federal government will soon decide whether to close its lengthy anthrax-poisoning investigation, which came on the heels of the Sept. 11 terrorist attacks.

An additional question to be answered is whether U.S. mail destined for the White House, Congress and federal agencies in specific ZIP codes will continue to undergo irradiation.

This columnist has just finished reading a Government Accountability Office (GAO) report dated July 31, 2008, showing that about 1.2 million containers of federal mail, each weighing up to 20 pounds, were irradiated from November 2001 through April 2008. The cost for the irradiation: about $75 million.

In January 2008, the U.S. Postal Service abandoned its plans to build an irradiation facility in Washington, citing costs and other considerations, and will continue contracting for the services.

One positive note from the GAO: mail volume and delivery is decreasing with the advance of electronic correspondence.

Perhaps it's the depressed economy. Or maybe because it's an election year. And don't forget it's August, too.

Whatever the reason, tempers are flaring on Capitol Hill — to the extent that apologies are being issued left and right.

"Members had no advance notice of the vote, and I did not familiarize myself with the substance of the motion as much as I would have liked," he said. "If the vote were taken again, I would vote 'present' rather than 'aye.' "

"Madam Speaker, during floor debate on the legislation to regulate tobacco yesterday, I made some remarks that unfairly and inaccurately personalized the issue, and I am here today to apologize to my friend and colleague, John Boehner," Democratic Rep. John D. Dingell of Michigan similarly announced Friday, referring to the House Republican leader from Ohio.

"I have the utmost respect for his professional abilities, as well as great affection for him personally. I did not intend for my remarks to be taken in any way as personal criticism. As a friend, I just did not want to see anything bad happen to him, or for his family to be burdened unnecessarily in any way."

"Again, I hope Mr. Boehner will accept my apology."

With much unfinished business and amid loud protest from the Republican side of the aisle, Congress adjourned Friday and members were no longer allowed to speak on the record on the House floor. Many lawmakers, including Rep. Ted Poe, Texas Republican, stayed and spoke anyway.

Or was he singing?

Even then, the measure was ordered to a third reading, read a third time, and then passed.

Not to make light of attention-deficit (hyperactivity) disorder, but given the latest announcement by the White House that the nation is spiraling out of control towards a record annual budget deficit of $482 billion, we did a double take when spotting Senate Resolution 649, introduced last Friday.

After all, the resolution designates Sept. 18, 2008, as "National Attention-Deficit Disorder Awareness Day."

Rather than President Bush's budget woes, the measure draws attention to the chronic neurobiological disorder that affects both children and adults.

Or so David Plouffe, campaign manager for Sen. Barack Obama, describes accusations leveled of late at the Democrat by his Republican opponent, Sen. John McCain.