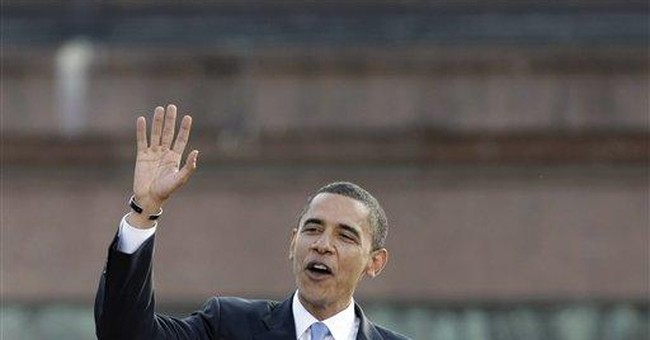 Talk about former Vice President Al Gore putting the pressure to perform on Barack Obama should he win the White House.

"Remember, there's a new world waiting at the other side of these elections," Mr. Gore promised this week.

Talk about a last-minute endorsement for Barack Obama.

Minutes after both Mississippi Gov. Haley Barbour and the U.S. Supreme Court denied appeals to spare his life and he was put to death by lethal injection Wednesday evening for his role in a 1998 claw hammer bludgeoning of a friend, 34-year-old Dale Leo Bishop urged Americans to vote for the Illinois senator for president.

According to the Natchez Democrat, after being strapped to a gurney Wednesday evening and apologizing for the crime, the goateed Bishop uttered these final words:

"For those who oppose the death penalty and want to see it end, our best bet is to vote for Barack Obama because his supporters have been working behind the scenes to end this practice. God bless America; it's been great living here. That's all."

A U.S. congressman is calling on Egypt to release a popular human rights blogger from prison.

"Kareem Amer, as he is known on the blogosphere, was sentenced to four years in prison in February 2007 solely for what he wrote on his blog condemning Islamic extremism and the treatment of women," notes Rep. Mark Steven Kirk, Illinois Republican.

The congressman points out that Egypt is one of the largest recipients of U.S. aid and, "We should ensure that the partners of ours of this magnitude are also dedicated to the freedom of expression."

"Imagine being 13, 14, 15 years old and putting the microphone in front of senators or presidential candidates and asking them about juvenile justice, immigration or education?" says Miss Ralls, who adds that 12 youths from Washington, New York and New Orleans have been selected to attend the Republican and Democratic national conventions in St. Paul, Minn., and Denver respectively.

"They will produce print, audio, broadcast their work that will be published for the Minneapolis Star Tribune, Metro USA, and PBS' 'The Online NewsHour,'" she says.

Number of skateboards being sent to Iraq for the Baghdad Zoo and Entertainment Experience, now under construction: 2,000.

Congress recalled that it was 10 years ago this week, on July 24, 1998, that U.S. Capitol Police Detective John Michael Gibson and Pfc. Jacob Joseph Chestnut were gunned down in the line of duty.

It was noted in a resolution passed this week that the Capitol Police "are on the front lines of the war on terrorism and remain on constant alert against unauthorized access to Capitol buildings, terrorism, and other threats to the Capitol Complex."