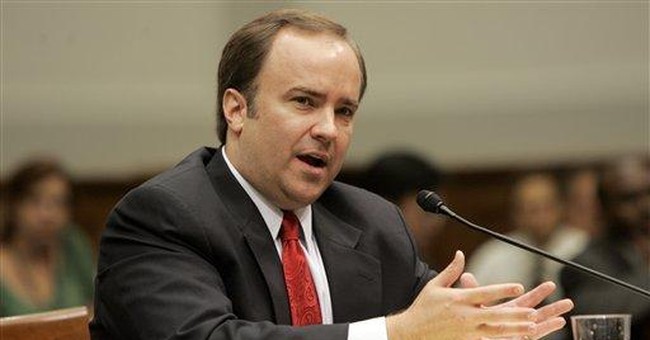 "I'm pleased to be your tour guide," begins the once-loyal aide to the president, his presentation titled "Life in the White House."

In the video tour, Mr. McClellan describes his morning "gaggles" with the White House press, an off-camera session where he provided those "messages we want to get across that day."

"Then later in the afternoon … is the daily White House press briefing … about [items] of news interest the White House wants to get out to the public," he continues.

At one point during the 12-minute tour, Mr. McClellan is seen walking into a glass-enclosed cubicle occupied by a broadcast network, where a sign on the door reads: "Unnamed Sources With Leaks Welcomed Here."

The one-of-a-kind program created by the Army seeks out … "patriotic employers" who are drawing from and utilizing the same work force. The partnership will allow both organizations to recruit, train and employ people interested in both serving the country and pursuing a profession in law enforcement.

Former Democratic presidential candidate Sen. John Edwards is back in Washington on Tuesday to address the Campus Progress National Conference at the Omni Shoreham Hotel.

The conference is described as a central hub for organizing young progressives, who call attention to the record youth turnout in the 2008 primaries.

"Young people have been taken for granted by the political system for too long," said Annika Carlson, the 23-year-old conference coordinator. "We are voting and organizing, and now we need to take the next steps to hold our leaders accountable and press for change on all the key issues, from the economy to civil rights, global warming to the war in Iraq."

Numerous politicians from Washington will fill the pews of Hayes Barton Church in Raleigh Tuesday for the funeral of former North Carolina Sen. Jesse Helms, who died July 4 at age 86.

This columnist frequently crossed paths with the conservative lawmaker, including upon his retirement in 2002, when his many mementos were being boxed up in his Capitol Hill office — including his desk.

In this age of espionage, or so I observed at the time, it isn't uncommon that the offices of senators are swept for hidden listening devices. Intelligence specialists descend on a lawmaker's office and, in the space of a few hours, examine every nook and cranny, lamp and telephone in the quest for concealed bugs.

One such bug-sweeper revealed to Inside the Beltway that he once conducted a search of Mr. Helms' office and was surprised to discover something else of intrigue glued beneath the desk of the powerful Foreign Relations Committee chairman.

"Two different pieces of paper going back many years, each protected in plastic, glued right under the center part of the desk," said the bug-sweeper, who spoke on the condition of anonymity. "They certified that the senator had personally purchased the desk and authorized him to take it with him upon retirement.

"I never saw anything like it," he said. "And now the day has come that he is retiring."

Mr. Helms' spokesman at the time, James Broughton, confirmed that one of the documents was a letter from the Senate Rules Committee, certifying that the impressive "Partners Desk" was the property of the senator. There was even the canceled $350 check that Mr. Helms wrote to purchase the desk, which now would cost about $15,000.

"Back then that was a good bit of money," Mr. Broughton noted. The senator was first elected in 1972.