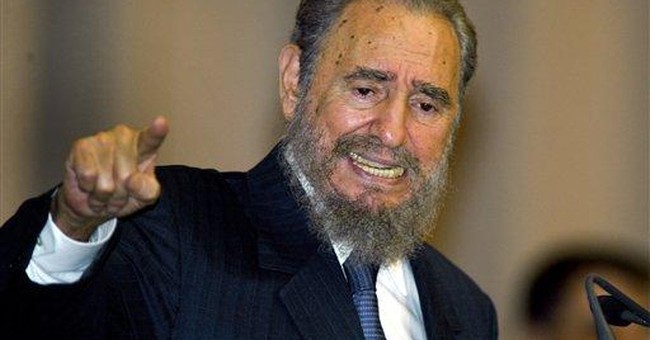 Dictator Fidel Castro's announcement yesterday that he will not accept a new term in office means nothing for the future direction of Cuba, says a U.S. congressman who is the nephew of Mr. Castro's first wife.

Havana-born Rep. Lincoln Diaz-Balart, Florida Republican and nephew of Mirta Diaz-Balart, says it is important to realize Mr. Castro has only relinquished the titles of "president" and "commander in chief."

"In totalitarian Cuba, Fidel Castro's absolute power is not based on titles," he points out. "Let us not get confused with the dictator's titles or lack of them. For now, nothing has changed in totalitarian Cuba."

After 49 years of rule by Fidel Castro, you'd think the United States would have had a plan in place by now, ready for implementation, to wield democratic influence on the Cuban population once the dictator's reign ended.

Not the case, says Dan Restrepo, director of the Americas Project at the Center for American Progress, who agrees that while Cuba will never be the same, "unfortunately neither the United States government nor the successor regime in Cuba appears prepared to deal with what comes next."

Somebody who was prepared for Fidel Castro's announcement yesterday was Rich Noyes of the Media Research Center, a U.S. media watchdog group based in Washington.

One year ago this month, the MRC research director compiled for such an occasion the "U.S. Media's Decades of Cheering Castro's Communism."

The list of American cheerleaders is far too long to reprint, so we will allow ABC's Barbara Walters to speak for the entire bunch. She traveled to Havana in October 2002 for an exclusive interview with Mr. Castro, during which she opined: "For Castro, freedom starts with education. And if literacy alone were the yardstick, Cuba would rank as one of the freest nations on Earth."

Neither, of course, is the case.

A new survey conducted by Foreign Policy magazine and the Center for a New American Security, one of the most comprehensive conducted of late among the U.S. military community — in this case 3,400 active and retired officers, all of whom hold the rank of major or lieutenant commander and above — finds nearly 90 percent saying the war in Iraq has "stretched the U.S. military dangerously thin."

Worse yet, should the United States have reason to enter a major war at this time, 80 percent of the officers say it could not be successfully waged.

Republicans launched an attack yesterday on freshman Rep. Patrick J. Murphy, a Pennsylvania Democrat who served as an Army lawyer in Iraq — a war he otherwise does not support — who days before becoming a member of Congress "struck a questionable book deal" that nabbed him a $100,000 advance.

And what's wrong with that?

The lucrative deal surrounding the book, which arrived in stores yesterday (already it's "been panned by literary critics, but the literary quality of the book is not what remains in question," states the National Republican Congressional Committee), was cut in December 2006 — just days before Mr. Murphy was sworn into office on Jan. 4, 2007.

House ethics rules bar members of Congress from receiving advance royalty payments, which Mr. Murphy was warned about during his freshman orientation before he was sworn in. The book is titled, "Taking the Hill: From Philly to Baghdad to the United States Congress."

Last week, when writing about a physician-turned-congressman, we recalled Benjamin Franklin's familiar saying that nothing in this world is certain except death and taxes.

Inside the Beltway reader Marc Zimmerman of Vancouver, Wash., now writes: "In the modern era, we can edit that saying to be more accurate: Nothing in this world is certain except death and taxes; one of which you can get an extension on."