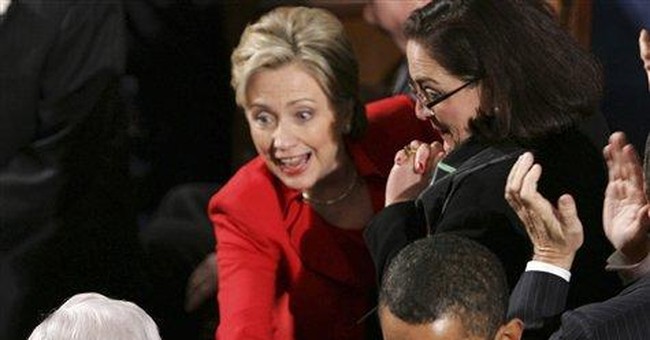 Forget Iowa and New Hampshire, ignore South Carolina and Florida yesterday, and pay no mind to Super Tuesday. In fact, why not skip the increasingly pointless Democratic and Republican national conventions?

It's become apparent nine months before Election Day that the 2008 presidential election will pit Democrat Barack Obama against Republican Mitt Romney. How so?

In the chapter "The Long and Short of It," Mr. Shapiro writes that size does matter. He reveals why the taller candidate, from the beginning of American history, has almost always won the presidency. Taller people have a wide variety of advantages in politics, something to do with the fact that being tall breeds high self-esteem and leadership qualities.

As for today, Mr. Obama of Illinois stands at almost 6 feet, 2 inches. And Mr. Romney, the former Massachusetts governor, is exactly 6-feet-2. Consider, at the same time, that Democrat Hillary Rodham Clinton measures 5-feet-6, while Republican John McCain is 5-feet-7.

As for Jimmy Carter, Mr. Shapiro says he "got lucky in 1976. For the first time since William McKinley in 1896, Carter won the presidency as the shorter, nonincumbent candidate."

And finally, regarding George W. Bush defeating Al Gore in 2000 and John Kerry in 2004 — 6-feet-1 and 6-feet-4, respectively — now you know why the president wears cowboy boots.

Democratic National Committee blogger Michael Link got a kick out of Republican presidential candidate John McCain saying he is "humbled" by the recent endorsement from former Montana Sen. Conrad Burns.

After all, it was the Arizona senator who took to the Senate floor "to mercilessly ridicule" his fellow Republican for tucking a $1 million earmark into a spending bill to study the DNA of Montana's bears.

"One can only imagine and conjure up an idea as to how this might be used," mocked Mr. McCain. "Approach a bear: 'That bear cub over there claims that you're his father and we need to take your DNA.' Approach another bear: 'Two hikers had their food stolen by a bear, and we think it is you. We have to get the DNA.' "

71 rounds of applause (with Bush)

3 rounds of laughter (with Bush)

It took seven years, until the president's very last State of the Union address, and now J.B. Poersch, executive director of the Democratic Senatorial Campaign Committee, says, "I finally figured out what that smirk is for. George Bush just can't keep saying his lines with a straight face."

Once again, Mobil Travel Guide has given its five-star award to the Four Seasons Hotel in Georgetown, making it still the city's first and only Mobil Five-Star, AAA Five-Diamond Hotel.

General Manager Christopher Hunsberger credits the hotel's 435-member staff for having demonstrated their "passion to serve and their compassion for our guests."

Once again, Washington art figure Marsha Ralls is being saluted for her trademark drive and enthusiasm, this time in New York.

The founder and president of the Ralls Collection in Georgetown will be honored by the National Foundation for Teaching Entrepreneurship (NFTE) for her commitment to increasing education and economic opportunities for low-income youth at NFTE's 15th annual "Salute to the Entrepreneurial Spirit" Awards Dinner on April 2.