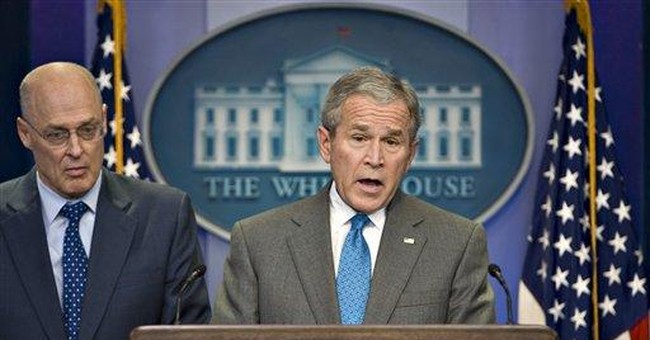 We have it on good authority that George W. Bush tonight will not acknowledge a national "recession" in his last State of the Union address, which begins at 9 p.m. in the U.S. Capitol.

Were you aware that the real reason the House sergeant at arms loudly announces that Mr. Bush is entering the House chamber is because the president of the United States is otherwise not allowed on the floor of Congress?

Anyway, for those watching the address at home, we promised last week to bring you this year's rules for the popular pastime, "The State of the Union Drinking Game 2008."

Last year, for instance, every time the president said "Mahmoud Ahmadinejad," players had to take two gulps of their chosen beverage, and swallow a third if Mr. Bush pronounced the Iranian president's name correctly.

Tonight, for the president's farewell address, players will be required to take one drink for every "Bushism," which is defined as "something that's not really a word." One example given is the "nukular."

In addition, one drink must be consumed every time Mr. Bush says "Hamas," with an extra gulp "if he confuses Hamas and hummus."

Tell us, Sen. Bob Casey, Pennsylvania Democrat and member of the Joint Economic Committee, is the nation in "recession" or not?

"I was asked recently by a reporter — a couple of different reporters, actually — who said to me very simply — or asked me, I should say, very simply the question: Are we in recession?

There was much reader reaction to several Inside the Beltway items of this past week, from as far away as Kristiansand, Norway, where Michael Ricke weighed in about New York Sen. Hillary Rodham Clinton's chances of winning the White House.

"Another thought, what Democratic politician in their right mind would ever agree to be Hillary's running mate? You will be less than a vice president living somewhere in Bill Clinton's shadow," Mr. Ricke opines. "If Al Gore thought it was tough living in the wake of Hillary's unelected eight-year power trip, just wait for life as a vice president with Bill in the wings."

"I noted with a wry chuckle your discussion of [Virginia Senate candidate] Mark Warner's fundraising mailer, which admonished President Bush for the 'mismanaged war in Iraq' and the need for a 'responsible plan to bring our troops home.'

"In 2004, I was activated with 500 other Virginia National Guardsmen to deploy as part of the global war on terror. Around Christmastime, we received a letter from then-Governor Warner noting the difficulties in being away from our families and thanking us for our service in Iraq.

"One problem: We were serving in Afghanistan.

"Should a 'responsible plan' ever come into existence, I hope for the sake of my brothers and sisters in arms currently deployed that someone with a significantly less anemic attention to detail than our would-be senator is in charge of the travel arrangements."

That was the Pigskin Club of Washington recognizing a number of "Living Legends" at its recent 70th annual awards dinner at the Capital Hilton Hotel.

Surely, the former Redskins quarterback, wide receiver and defensive back need no introductions. But how did Mr. Olender wind up in the Pigskin bunch?

"The closest I ever came to competitive sports fame was winning a letter on the speech and debate team at Mc-Keesport High School in Pennsylvania," answers the lawyer, who notes the biggest applause of the evening "unquestionably was for Doug Williams, our Super Bowl hero."

We should point out that Mr. Olender served as chairman of the board of the Doug Williams Foundation, which served economically disadvantaged youth.