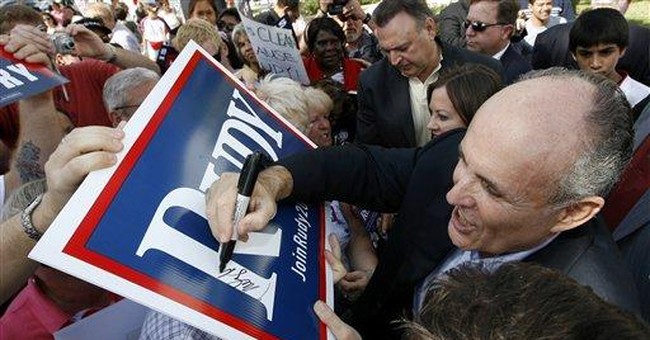 We had to laugh at the memo Karen Finney, director of communications for the Democratic National Committee, just sent to the four spokesmen for Republican presidential candidates Mitt Romney, John McCain, Mike Huckabee and Rudolph W. Giuliani.

"If imitation is the highest form of flattery, then we [Democrats] owe you a word of thanks," she writes. "As you might have guessed, we've been following your candidates for a while now. So you can imagine our surprise to watch as one by one, they have all tried to emulate our party's candidates by co-opting our message about the need for 'change' in America."

Memo to Miss Finney: Judging from the letters sent in by readers of Inside the Beltway, Americans are tired of hearing so many of the 2008 presidential candidates, regardless of party affiliation, promise "change" — whatever that means.

The least the candidates could do, we could suggest to both parties, is come up with a more definitive campaign sound bite, something with some "meat" in it.

VIPs from virtually every corner of Washington will flock to Brasserie Les Halles tomorrow night to salute Charlie Brotman on his 80th birthday.

"I love turning 80. I just don't believe it," the Washington PR mogul told Inside the Beltway yesterday. "Now, when anybody asks me how old I am, I'll reply, '40 — for the second time."

Among myriad hats worn by the D.C. native, who grew up adjacent to his parents' small grocery store, Mr. Brotman every fourth January for the past 48 has been the president's inaugural parade announcer. Ever since Dwight D. Eisenhower's second inauguration in 1957, the one-time Washington Senators' stadium announcer has introduced hundreds of thousands of usually frozen spectators to newly elected and incumbent presidents — nine in all, including George W. Bush.

(For anybody confused, Gerald R. Ford missed out on his inaugural parade because he replaced Richard M. Nixon in midstride, and subsequently lost the 1976 election to Jimmy Carter).

Will we see him back in his inaugural parade perch next January?

"I hope so," Mr. Brotman said yesterday. "It will be my 14th consecutive presidential inaugural parade — my 10th new president, covering a period of 53 years."

In a scathing statement over the weekend, the chairman of the National Black Republican Association says the recent firestorm ignited by Sen. Hillary Rodham Clinton's "racially-tinged" attempt to derail Sen. Barack Obama's presidential campaign shows the perils of Democrats "using their race-based weapon against a black Democrat."

Frances Rice charges that "Democrats have a 150-year history of using race as a political weapon to keep blacks in virtual slavery and Republicans out of power."

Mrs. Rice was not only critical of white Democrats, but the party's black members, too. She says in her "black community, people are outraged about how Democrat demagogues, including billionaire Bob Johnson of [Black Entertainment Television], are treating Obama as an 'uppity Negro' who dares to defy their white Democratic Party masters."

Former Republican George Phillies has just been endorsed for the 2008 Libertarian Party presidential nomination by the executive committee of "Outright Libertarians."

As for the 60-year-old Mr. Phillies, a scientist and college physics professor who previously served in the U.S. Army Reserves, he says he was a Republican until the late 1980s, abandoning the party when the government and deficit "got bigger," taxes "kept going up," and the party's social agenda got on the "wrong track."

"I am not a social conservative," he explains. "When George Bush attached himself to the 'Christian Right', he took the Republican Party his way, and I went my way."