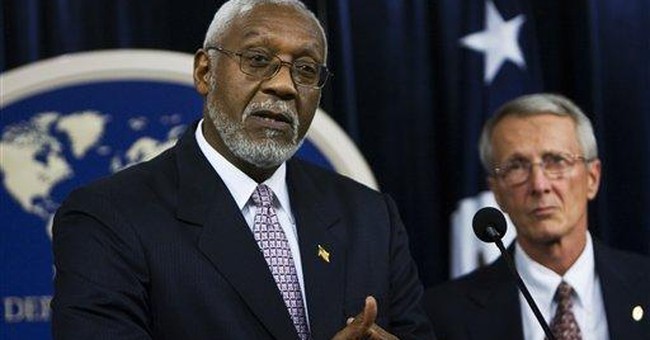 The president of the National Geographic Society was reminded yesterday that Ireland is not one of the "British Isles."

Rev. Sean Mc Manus, president of the Capitol Hill-based Irish National Caucus, complained to John M. Fahey Jr. that the society's Travel Catalog 2008-2009, which Mr. Fahey introduced, is "geographically confused" for claiming that Ireland and its top attractions like the Cliffs of Moher are among the "British Isles."

Northern Ireland, a constituent country of the United Kingdom, is not mentioned in the catalog.

Given his proud Irish name, the Catholic priest says, Mr. Fahey should know better. "If someone wants to give it a name, it is usually called the Emerald Isle," he said.

Rep. Ted Poe of Texas is furious at the Departments of State and Justice for not responding to congressional inquiries about the purported sexual assault of Jaime Leigh Jones while she was a contract employee in Iraq.

Miss Jones says she was drugged, sexually assaulted and held against her will by co-workers from the Haliburton subsidiary KBR while posted in the Green Zone of Baghdad. Mr. Poe, founder and co-chairman of the Congressional Victim's Rights Caucus, was asked by Miss Jones' father to get her out of Iraq.

Ever since, the congressman, a former criminal court judge, has sought answers. "Who is in charge here?" he asks. "This type of blatant disregard for responsibility by our government is unacceptable."

Date: Dec. 10, 2007: Requests information from Attorney General Michael B. Mukasey regarding the status of the investigation.

Date: Dec. 10, 2007: Separate requests for information pertaining to the investigation made to the State Department's Department of Overseas Citizens Services and Diplomatic Security.

Date: Jan. 3, 2008: Mr. Poe asks Secretary of State Condoleezza Rice to find out what is going on and tells her of the lack of cooperation from her department.

More than 1 billion pages of classified federal records and transcripts have been studied and "declassified" since 1995, and there's plenty more where those came from.

The federal Public Interest Declassification Board has just sent its inaugural report to President Bush providing recommendations for the declassification system. Acting board Chairman Martin Faga says "the task gets ever harder as the volume increases and materials are created in more complex formats."

Among 49 recommendations, the board proposes the establishment of a National Declassification Center, saying the current system is ill-equipped for future challenges.

An artistic "illusion" has been unfolding in Room H-144, the hearing room for the House Committee on Appropriations.

H-144 was the first room in the U.S. Capitol decorated with murals by Constantino Brumidi, the "Michelangelo of the United States Capitol," who finished the two-year project in 1856. Because the room was assigned to the Agriculture Committee, he painted the Four Seasons on the vaulted ceiling.

But not until nearly 20 years ago, says the Architect of the Capitol, was it discovered that the walls of the room were painted by Brumidi in true fresco to resemble stone, with "illusionistic" carved moldings forming arches — the only room in the Capitol known to have been painted entirely in true fresco from floor to ceiling.

The room was coated in oil-based paint after a small fire in 1920, even though only 2 square yards of the frescoed wall was damaged. Since then, coat after coat of paint has covered the masterpiece.

But in a test project during the August 2004 recess workers painstakingly removed a section of paint, and the results were outstanding. Subsequent restoration "has made the illusionistic carvings above look even more convincingly three dimensional and vivid," the Architect states.