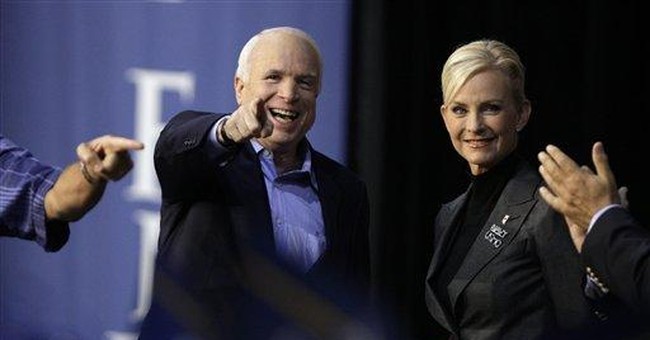 Good morning, this is John McCain, speaking to you just days away from the time for choosing.

In a time of economic hardship and uncertainty, for many Americans the choice will turn on whether we raise federal taxes or reduce them. My opponent is committed to a massive new tax burden on our economy, even at the risk of bankrupting small businesses and destroying jobs. I am committed to tax relief for working families and tax incentives for businesses to create jobs.

Senator Obama has been very guarded about his tax plans, and it took a working man to finally pull the truth out of him. As he told Joe the Plumber back in Ohio, he wants to quote "spread the wealth around." To pay for nearly a trillion dollars in new government spending, Senator Obama's tax increase would impact 50 percent of small business income in this country, and the jobs of 16 million middle class Americans who work for those small businesses.

Senator Obama assures us that he has a very clear target of just the top five percent of income earners. And anytime you hear talk of a targeted tax increase, you might want to double-check the skill of the marksman -- the U.S. Congress has been known to fire wildly. Remember the Alternative Minimum Tax? You probably do if you're one of the more than 30 million Americans currently threatened by it. That "targeted tax" was originally aimed at just 155 specific people. Once enacted, taxes have a way of spreading and rising. And that is why, as president, I am going to put a stop to the out of control spending, so we can keep taxes low.

The McCain-Palin tax cut is the real thing. We're going to double the child deduction for every family. We will cut the capital gains tax. And we will cut business taxes to help create jobs, and keep American businesses in America.

What's more, I'm not going to spend $750 billion dollars of your money just bailing out the Wall Street bankers and brokers who got us into this mess. I'm going to make sure we take care of the working people who were devastated by the excesses of Wall Street and Washington.

Two weeks ago, I announced a plan to protect the value of your home and get it rising again by buying up bad mortgages and refinancing them so if your neighbor defaults he doesn't bring down the value of your house with him. This will help stem the tide of foreclosures that are hurting families, and it will put a floor under the broken housing market that was at the root of the financial crisis.

While Washington has been bailing out banks, I have been arguing that we need to focus on fixing the underlying problem: foreclosures on bad mortgages and the collapse of our housing market. Without fixing this fundamental problem, our economy will not get back on track. This week, we learned that the number of foreclosures spiked by 71 percent last quarter, and finally Congress and the Administration are putting together a plan to address this problem. Let me say: It's about time.

I have been focusing my priorities on helping those people who have been impacted by this crisis. I have a plan to let retirees and people nearing retirement keep their money in their retirement accounts longer so they can rebuild their savings.

I have a plan to hold the line on taxes and cut them to make America more competitive and create jobs here at home. Raising taxes makes a bad economy much worse. Keeping taxes low creates jobs, keeps money in your hands and strengthens our economy.

The explosion of government spending over the last eight years has put us deeper in debt to foreign countries that don't have our best interests at heart. It weakened the dollar and made everything you buy more expensive.

I will freeze government spending on all but the most important programs like defense, veterans care, Social Security and health care until we scrub every single government program and get rid of the ones that aren't working for the American people. And I will veto every single pork barrel bill Congresses passes.

As Joe the Plumber and small business owners across the country have now reminded us all, America didn't become the greatest nation on earth by giving our money to the government to "spread the wealth around." In this country, we believe in spreading opportunity, for those who need jobs and those who create them. And that is exactly what I intend to do as President of the United States.