John Kass
|
Posted: Dec 20, 2018 12:01 AM
Share   Tweet
The opinions expressed by columnists are their own and do not necessarily represent the views of Townhall.com. 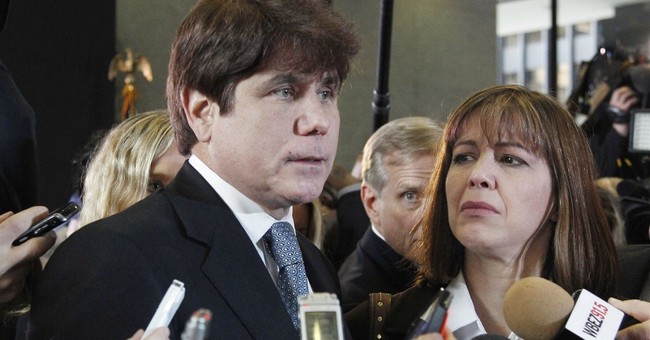 Right before Christmas, President Donald Trump had to go and pull that Blagojevich scab off corrupt Illinois. And he did it with a tweet.

"Required television watching is last weeks @marthamaccallum interview with the wonderful wife of Rod Blagojevich and the @trish_regan interview with a Jerome Corsi. If that doesn't tell you something about what has been going on in our Country, nothing will. Very sad!"

Trump is spinning, rather desperately, about his adviser Jerome Corsi, who is under investigation by special counsel Robert Mueller. Trump seems to be acting as his own lawyer now, and he may have a fool for a client.

While the Corsi reference is all about is Trump's personal future, the other part of the president's tweet is horrendous for everyone suffering in the politically corrupt state of Illinois: Trump teasing a possible Christmas pardon for former Gov. Blagojevich, a cheap crook and chiseler who got what was coming to him.

Blagojevich's "wonderful wife," Patti Blagojevich, daughter of a Chicago machine boss, showed up on Fox News to play the wounded spouse of a public servant ruined by the feds.

You could almost forget how she shrieked like a fishwife on federal tape, demanding that her husband use government leverage to crush their critics.

"We know that President Trump is a kind man, he's compassionate, he's always been kind to our family, he knows how important it is that my husband gets home to be father to our daughters. We can't help (but) be hopeful," Patti Blagojevich told Fox News' Martha MacCallum.

Groveling before the president, pairing him with her husband, is one cheap thing. But suggesting Blago was an honorable public servant ruined by the feds is more than cheap.

Because Blagojevich was no public servant. He was a grifter.

But two real public servants died the other night in Chicago, two Chicago police officers chasing a man with a gun along the railroad tracks on the Far South Side.

They had no press agents with them, or Chicago political machine hacks or media biscuit eaters pushing them up the railroad embankment. There was no pack of jackals barking out their virtues.

Officer Eduardo Marmolejo, 36, and his partner, Officer Conrad Gary, 31, were chasing the suspect on the tracks. They noticed a train coming at them. But they didn't hear the train coming up from behind them when they were hit.

They were fathers of young children.

"He was a cop in the Air Force," Gary's older brother, Michael Gary, told the Tribune, "and that kind of just drove him wanting to be a cop even more and to protect people."

Marmolejo's friend Brendan Kiefer said that "he was very humble in everything he was doing until he accomplished it."

Now think about what Blagojevich told NBC in an interview about his arrest by the FBI.

"I thought about Mandela, Dr. King, Gandhi and trying to put some perspective in all of this and that's what I'm doing now," Blagojevich said.

Dr. King, Gandhi and Mandela? They didn't shake down a children's hospital.

They didn't try to sell a U.S. Senate seat. Blagojevich did.

And though that charge was thrown out on a technicality, there was enough in Blago's bag of tricks to keep him inside.

And Dr. King, Gandhi and Mandela never said, "I've got this thing, and it's (bleeping) golden."

Blagojevich, the weasel, said it.

Here's the thing about weasels. When you're running, searching for a man with a gun, you don't want a weasel as backup.

Weasels can marry the daughter of the Democratic ward boss, but that's not enough to become governor. Blagojevich was pushed into office by other nationally prominent Illinois Democrats. Among them were the Daleys, and future mayor Rahm Emanuel and future president Barack Obama, and Patti's ward boss father, Dick Mell.

Longtime black Democratic Party hack Roland Burris came into the race and did his job, pulling African-American votes away from the reformer, Chicago schools chief Paul Vallas. It was Democratic tribal arithmetic.

Vallas was independent of the Daleys. He wouldn't dance when they snapped. That's why the Daleys dropped him and went for Blagojevich instead. Vallas narrowly lost the Democratic primary. He should have been governor.

If he had been, Illinois would have been spared all that Blago disgrace.

After Blagojevich realized he couldn't sell the Senate seat that once belonged to Obama, he installed the party hack, Burris, in that spot. Together, they shamed Illinois.

And now, the Daleys, Emanuel and other prominent Democrats who made Blagojevich governor in 2002 are trying to shape the 2019 race for mayor of Chicago.

Trump talks about Chicago violence to jab at Emanuel. And he makes a big deal about his support for police.

Yet before he teases a pardon for Blagojevich, the president might want to think about true public servants instead. Politicians risk giving up nothing but their honor, and to most politicians, honor is cheap.

Police risk giving up their lives, in public service.