School Shooters Are a Symptom of a Culture That Is Ill

John Kass
|
Posted: May 22, 2018 12:01 AM
Share   Tweet
The opinions expressed by columnists are their own and do not necessarily represent the views of Townhall.com. 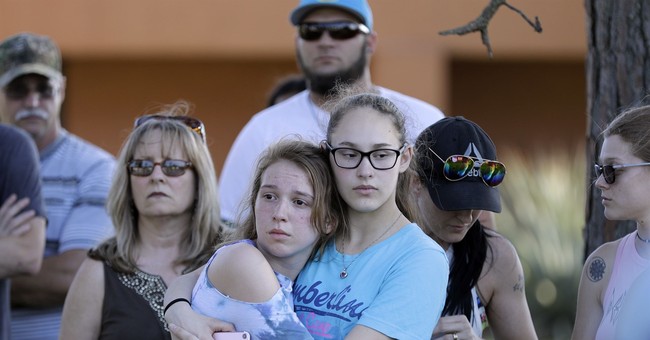 My brother Peter and me.

There were two 12-gauge shotguns. We were going hunting.

I suppose that sounds crazy, after what happened at the Santa Fe High School in Texas on Friday.

Another mass school shooting, another horror show with at least 10 students and staff dead, at least 10 others wounded and a disturbed shooting suspect in custody who left explosive devices to kill more people.

His name is Dimitrios Pagourtzis, and he's 17.

He allegedly used his father's shotgun and a .38, and so the father is responsible for this, too.

If he didn't know that something was deadly wrong with his son, he should have. He's the father. Ten innocent people are dead.

But in my view, the father is the father. The guns were his. The suspect is his son.

As I write this, after the politicians in Texas had their say, the tired liturgy began anew.

You know how this goes. You've seen it before: anger, tribal chant and politics, those who want armed security at schools, those who say there are too many guns in America already.

We slide into our default positions. We think by hashtag.

The uglier our thoughts, the harsher they are, the better. People let their anger roll off their thumbs and onto the Twitter accounts. You can watch the number of your Twitter followers grow when you call people like me a "gun fetishist."

Or you can posture and preen, blame President Trump and the Bill of Rights, and signal your virtue to people you don't know.

It has nothing to do with understanding.

It has nothing to do with seeing these boy shooters at schools as something more than mere platforms for our gun politics.

They're monsters, yes. And they're evil. And the parents in such cases who say they never realized their boy was dangerously mentally ill seem to me to be nothing but liars.

If you want gun control, I'll offer some now: The mentally ill should be nowhere near guns. I support the Second Amendment, making me an almost extinct creature in the world of journalism.

But I don't care if the NRA likes that idea or not.

Also, every state should implement some version of a Gun Violence Restraining Order, so families may petition the courts for the temporary confiscation of guns from the mentally ill.

Schools, like hospitals, are soft targets. They must be hardened.

Every school should have a trained law enforcement officer -- not an untrained teacher -- armed and ready.

There were law enforcement officers at the Texas school, and more would have been killed if they hadn't been there.

But I see the killers as something else, too.

I see them as symptoms of a culture that is seriously ill.

The boy shooters filled with nihilism and despair, with hate, with little regard for the lives of others. But how were they formed?

The boy shooters weren't hatched from dead eggs in an empty desert and raised up alone.

We're all part of the culture. So we shape them, if not directly then indirectly as we pursue our own wants and desires. We till the ground for the young.

Belief in God is mocked in our culture. Religion is belittled. Decency is snickered at. Tradition is deconstructed.

Liberty is defined as doing what we want with our bodies. We glaze our minds with media and say hateful things to people we don't know by using our phones, because we're right and those who disagree are wrong.

The wave of school shootings dating back to Columbine are telling us something, but we don't want to understand, because understanding might make us guilty, and get in the way of our true American pastime: seeking instant gratification.

When Peter and I brought our guns to school, we weren't threats. We didn't have Twitter or Facebook.

We were just two boys with a good pointing dog on a cool morning in autumn.

We locked the shotguns in the trunk in the school parking lot and parked in the shade. We left our pointer, Jason, in the car with a bowl of water in his dog cage, with the windows half open.

Then we went to class to be marked as "present" before we ditched and drove to some fields near Kankakee to hunt pheasants.

"We didn't think about killing anybody," said Pete.

Pete had just come back from the cemetery where he'd taken our mom and my wife, Betty. They'd gone to tend Dad's grave.

And when they walked back into the house, I was there with the TV. The Texas shooting suspect's name was on screen:

My mom's jaw dropped, the immigrant fear of shame brought upon her people was obvious.

That doesn't matter. He's an American high school student and he's accused of killing 10 people with his father's guns.

And now we fight the same fight all over again.