Comey, Stephanopoulos like Varys and Littlefinger in 'Game of Thrones'

John Kass
|
Posted: Apr 19, 2018 12:01 AM
Share   Tweet
The opinions expressed by columnists are their own and do not necessarily represent the views of Townhall.com. 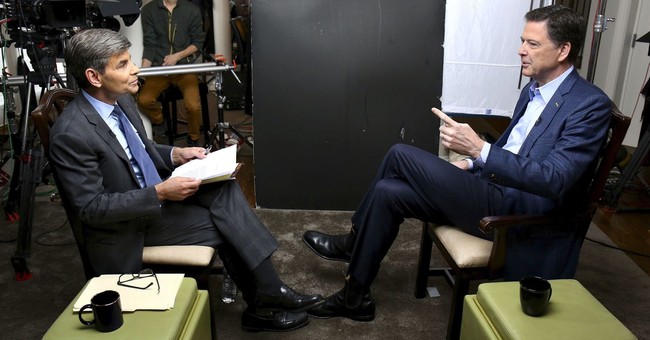 If you closed your eyes and listened to former (and fired) FBI Director James Comey in conversation with former Clinton aide (and Clinton Foundation Donor Zero) George Stephanopoulos on ABC, you would have heard two things that were disturbing.

One was the gossipy silkiness of their voices, Comey and Stephanopoulos cooing at each other, eviscerating President Donald Trump like the intriguers Varys and Littlefinger in "Game of Thrones."

The other was the lack of talk about Andrew McCabe, the former assistant director of the FBI who was fired recently and became something of a hero to the anti-Trumpers, with $500,000 stuffing his GoFundMe account.

According to the Department of Justice inspector general's office, McCabe arranged for information to be leaked to The Wall Street Journal about investigations into the Clintons. He did this to shield himself from a Journal story about how his wife had accepted hundreds of thousands of dollars in campaign funds from Clinton-related politicos in a failed run for office in Virginia.

After setting up that leak, McCabe lied four times to FBI investigators, and threw other FBI officials under the bus, according to the report.

It is the kind of lie that has led to criminal charges against Trump loyalists. And there's more to the McCabe/Clinton story expected in an upcoming Department of Justice inspector general's report on how the Clinton investigations were handled.

McCabe wasn't a focus of the ABC interview. Instead, Comey and Stephanopoulos feasted on salaciousness about Trump.

"He had impressively coifed hair, it looks to be all his," Comey said of Trump, who fired Comey for leaking and whom Comey loathes.

"I confess, I stared at it pretty closely and my reaction was, 'It must take a heck of a lot of time in the morning, but it's impressively coifed.' He looked -- his tie was too long, as it always is," Comey said. "He looked slightly orange up close with small white half-moons under his eyes, which I assume are from tanning googles. And otherwise looked as I had expected him to look from tele-, as I thought he looked on television."

Stephanopoulos: "You even clocked the size of his hands?"

There was plenty of fodder for Trump haters: hints that the so-called Steele dossier, paid for by Hillary Clinton's campaign, about Russian prostitutes and golden showers may "possibly" be true, though Comey supplied absolutely no evidence it was true.

He just left it out there. Littlefinger or Varys would have smiled, faintly as is their way, at this mastery of technique.

And Comey's likening the president to a mob boss demanding loyalty rings true, and helps sell his book.

Of course, Trump did his part to sell the book too, unleashing his angry Twitter thumbs to play the Presidential Troll. And in doing so, Trump affirms the criticism -- from Democrat and Republican establishmentarians alike -- that he doesn't quite have the temperament for the job.

Trump was vulgar and loud with his ridiculous un-presidential tweets, but is this new?

Stephanopoulos: "Did you tell him that the Steele dossier had been financed by his political opponents?"

Comey: "No. I didn't -- I didn't think I used the term 'Steele dossier.' I just talked to him about additional material."

Stephanopoulos: "Did -- but did he have a right to know that?"

Comey: "That it had been financed by his political opponents? I don't know the answer to that. It wasn't necessary for my goal, which was to alert him that we had this information."

He doesn't know the answer to that?

Whenever Comey would dish on something particularly disgusting, Stephanopoulos would respond delightedly. "Stunning," he'd say.

Watching the two of them on ABC, you couldn't miss that they're well practiced in the dark arts of Washington.

Those who read history probably understand that our American capital is the Versailles of the modern age. The French of old had their courtiers, ministers, intriguers, and we have them too.

Among the French of those times and among the establishmentarian American big wigs of our new century, there is the art of hinting and letting the damage dangle in the air.

But there is also great art in knowing what not to say, of inscribing the negative space around an issue, of avoiding the inconvenient truths, and this marks them as masters of the game.

They're not alone. Pro-Trump Fox news pundit Sean Hannity has proved he's practiced in what not to say too.

Hannity has loudly been vilifying the investigation of Trump by special counsel Robert Mueller, and recently the raids on the offices of Trump's personal lawyer and fixer, Michael Cohen.

But Hannity hid the fact that he was a Cohen client, as recently revealed in court.

Hannity is now in the same boat as selective truth tellers Comey and Stephanopoulos, where lack of candor and the sins of omission are the moist currency in our politics.

One who doesn't appear to play it that way is Justice Department Inspector General Michael Horowitz, an Obama administration holdover, who issued his report on McCabe. You should read it for yourself.

Horowitz's report on the FBI and the Obama Justice Department's handling -- or not handling -- of the Clinton investigations is due out in a few weeks.

And in it, Americans expect to learn about the political intrigues in the FBI and the Justice Department under Obama.

It will be an ugly but necessary thing, just as the Mueller report is necessary once it's complete.

Sunlight is always necessary, especially now, with so many players like Varys and Littlefinger in the Washington shadows.