No Lone Wolf in Pack of Sharia Supremacists

John Kass
|
Posted: Nov 07, 2017 12:01 AM
Share   Tweet
The opinions expressed by columnists are their own and do not necessarily represent the views of Townhall.com. 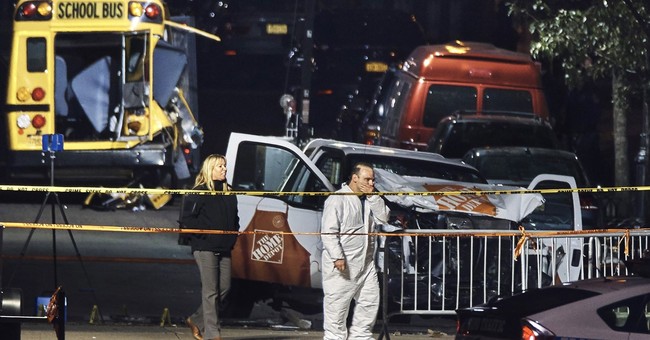 The critical thing about confronting evil is to call it by its rightful name. But New York Gov. Andrew Cuomo decided to call alleged truck terrorist Sayfullo Saipov a "lone wolf."

"All the evidence we have suggests that he was acting alone," said Cuomo. "The so-called 'Lone Wolf syndrome.'"

Lone wolf? That's a dangerous rhetorical mistake, made by a worried politician trying to avoid reality.

Saipov allegedly used a rental truck as a weapon of mass destruction on Halloween, and when it was done there were eight dead and a dozen seriously injured. He planned the attack for several weeks, said John Miller, the New York Police Department's deputy commissioner for counterterrorism.

"He seemed to have followed almost to a 'T' the instructions ISIS had put out" on how to execute a truck attack, Miller said Wednesday.

Whether it happens again in New York or Chicago or some other city, it will happen. Saying it will happen isn't willing it to happen.

ISIS terror has found its weapon, rented trucks, and there have been many similar murderous truck attacks in Europe and elsewhere. Only a fool would think that we've come to the end of these attacks.

Saipov may have acted alone. But Cuomo is wrong in saying he's a lone wolf. A lone wolf is an outlier, a random creature, solitary, often a madman.

Saipov may have worked independently, but he wasn't autonomous. He's part of a pack, the ISIS pack of Sharia supremacists. And ISIS is Sapiov's family. So he's not alone.

Their political ideology is that Islamic law must be imposed upon the world. And so it is this ideology, not Islam, that ultimately leads the radicalized, like Saipov, to mass murder.

Yes, Saipov is an immigrant, and yes, he is Muslim, but here's what worries me: We don't need less immigrant Muslim assimilation in America, we need more. And we don't need more isolation, as has happened in Europe.

This encourages the Saipovs in America to cleave to Sharia supremacism. It leads to more Saipovs committing mass murder.

Americans are not willing to accept radical Islamic terror attacks on our streets as the new normal.

But is there a way forward?

Perhaps. If we change the way we think about the problem.

I cover politics, and for years in Chicago that has meant watching ham-fisted men use government to exert control on others, to win power and wealth. And I've long been interested in the use of symbolism in politics, how words are forged into weapons, or goads, to herd voters along.

The right craftsmen can hammer sentences into fences, and prevent rogue thoughts from entering and weakening partisan arguments.

So could it just be that our politics, or at least our rhetoric, prevents us from seeing a way forward here, to realize our fight is with Sharia supremacism, not Islam?

It will be difficult to convince the Democrats. They belong to the open borders party, always pushing for more immigration, not less. Democrats loathe even mentioning Islamic terrorism. They're dogmatically compelled to denounce as a hateful racist anyone who'd use acts of Islamic terrorism to shape immigration policy restrictions.

It will also be difficult to convince Republicans. They want border control and believe American citizens should decide who enters this country and who doesn't. And many in the GOP probably wouldn't mind if all Muslim immigration was stopped cold.

Each side insists the other is insane. And then comes Sayfullo Saipov, in that rented truck in New York, shouting "Allahu akbar," and dedicating his kills to ISIS.

In response, President Trump has now ordered the end of the so-called Diversity Visa Program that reportedly brought Saipov to the U.S. He blamed Democrats for the policy, but it actually began under Republican President George H.W. Bush, years before the 9/11 terror attacks, and received bipartisan support.

What Trump also wants is "extreme vetting" of Muslim immigrants. He tweets that "We must not allow ISIS to return, or enter, our country after defeating them in the Middle East and elsewhere. Enough!"

The problem isn't ISIS, says Andrew McCarthy, the former federal prosecutor in New York who handled terrorism cases including the 1995 World Trade Center bombing. The problem is bombast, and language, and tribalism shaping our thinking and our policy outcomes.

"It is not ISIS," McCarthy writes in the National Review. "Jihadist organizations are a symptom. The pathology is Sharia supremacism. If you don't vet for it, you're going to keep having attacks ...

"Sharia supremacism is not a religion. It is a totalitarian political ideology with a religious veneer. This is the critical distinction -- ideology, not religion. If we cannot vet for Sharia supremacism because the political establishment decides it is not a political ideology but an Islamic religion entitled to all First Amendment protections, then we cannot protect the country. Period."

But how can the terms of a debate be changed, when Washington isn't interested in changing those terms or in distinguishing between Islam and Sharia supremacism?

I'm reminded of an interview that I had a while back with Ayaan Hirsi Ali. She's the American Muslim activist campaigning against the hideous practice of female genital mutilation of children in America.

The dirty political secret is that Democrats would not engage FGM for fear of being condemned as Islamophobes by liberal peers.

"I find this silence extremely painful," Ali told me. "It's been inculcated into them (the left) not to engage. ... They are afraid of being shunned. They're afraid of being put into a basket of deplorables. So they're silent."

But we can't afford that kind of silence any longer, can we?