John Kass
|
Posted: Oct 18, 2016 12:00 AM
Share   Tweet
The opinions expressed by columnists are their own and do not necessarily represent the views of Townhall.com. 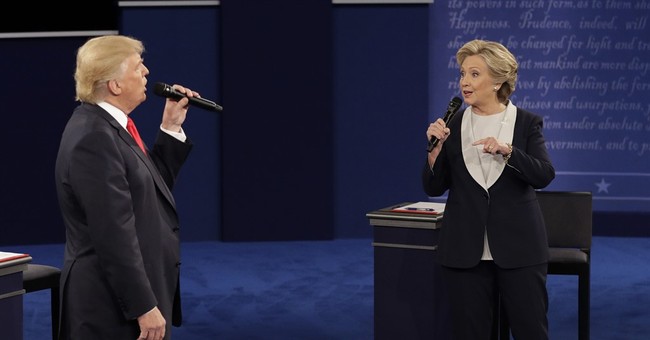 With only a few weeks left in this ugly presidential race to the bottom, Americans finally have a clear choice:

The Evil Queen vs. The Evil Clown.

Hillary Clinton, the ice queen of the American political establishment, a practiced deceiver who will make Nixon look like an angel before she's through.

She is the darling of the frightened bipartisan elites, and she is protected by their imperial guard, those in the media who ignore her sins to focus on Trump's.

And Donald Trump is the meat-faced barbarian at the establishment gates, swinging his angry rhetorical ax against the arrogant elites, like an Andrew Jackson of our time.

Trump spent years bragging about his sexual prowess, acting like a pig (or Bill Clinton) around women. And now he's so enraged by allegations of sexual aggression that he threatens, like an angry clown, to use the power of the federal government against his enemies.

Both Clinton and Trump are statists. Both believe in using the federal hammer.

Clinton would appoint liberals to the Supreme Court, weaken the Second Amendment if not others, and most likely end federalism.

Trump promises to appoint conservatives to the court, but there's nothing remotely conservative about promising to use the government to carry out a political vendetta. That's something that the IRS did, targeting conservatives, under the Obama administration.

So this is where we are now, an uncertain people in a post-constitutional society. The establishment center is corrupt and has been collapsing for years. And the people, tired of their lies, become angry. And now anything goes.

A political realignment is coming, no matter how this election turns out, but that won't happen for a while. In the meantime, we wait, stunned, and in a few weeks we'll all become quite gamy. That's probably why Americans dream of taking a long, hot shower, to scrub our brains out with soap.

The presidential campaign is now centered below the American belt, where Hillary Clinton desperately needed it to go.

It is all about using Donald Trump's history of alleged sexual aggression to destroy him with women voters.

And this is necessary for Clinton, because it distracts media attention away from hacked and WikiLeaked emails that would otherwise damage her campaign.

Sex sells. And Trump denies the allegations, but he's spent decades boasting about his prowess with the babes and the chicks, and now he's paying for it.

Hillary Clinton, the enabler or defender of a sexually predatory presidential husband, now plays on Victorian sensibilities to get what she wants: power.

Women have come forward to tell their stories, some almost 40 years old, unsubstantiated and loudly denied by Trump, yes, but perfect for television and Clinton. The political left goes crazy over all this and the media runs with it and everyone is breathlessly angry.

Unfortunately, they weren't so breathless and angry when their liberal lion, the late Sen. Ted Kennedy was making "waitress sandwiches" in Washington.

Establishment news organizations largely forgave Kennedy his sexual aggressions, even though he drove off a bridge, quite possibly while drunk, and swam away to leave secretary Mary Jo Kopechne to drown.

But Kennedy was a liberal. And Trump is not. So he is not excused.

Now Hillary herself pretends, in some precious manipulative fantasy expressed to Ellen DeGeneres on her TV show, that Trump stalked her as well during their last debate.

"He was really trying to dominate and then literally stalk me around the stage," Clinton said. "And I would just feel this presence behind me, and I thought, 'Whoa, this is really weird.' ... I was just trying to stay focused, trying to keep my composure."

She knows what buttons to push, and she's using emotion and sexual allegations to run out the clock on this campaign.

So the hacked Clinton camp emails from WikiLeaks are ignored. Purposely. Partisans on the left now discredit the lot, saying they're the work of the Russians, although when Julian Assange of WikiLeaks leaked other State Department cables, putting the U.S. in a bad light, the left embraced him as their champion.

Those emails offer important revelations about Clinton's dreams of open borders in her speech to Brazilian bankers, possible collusion between the Justice Department and the State Department to protect her in her private server email scandal, discussions of big money from the Saudis and more emails come out every day.

One of the most frightening, contemptible of all is the Democrats' plan to build and nourish front groups to undermine the Roman Catholic Church.

This should be front and center in the campaign. Catholics and evangelicals and Trump tend to focus on some of the more bigoted statements of the Clintonistas in the emails. But who is surprised by anti-Christian bigotry by the left?

It is the establishment of Catholic front groups by big-government Democratic strategists to work surreptitiously against the church that is truly horrific.

According to the emails, John Podesta, Clinton's campaign chairman, had a plan to unleash the pro-Clinton/Obama front organizations against the bishops at just the right time.

"We created Catholics in Alliance for the Common Good to organize for a moment like this," Podesta says in an email. "But I think it lacks the leadership to do so now. Likewise Catholics United. Like most spring movements, I think this one will have to be bottom up."

Podesta was correct about one thing. We're at the bottom. To have a hope of winning, Hillary had to take Donald there, and now he's rolling in it.

And the rest of us? We need that shower.