As the Establishment Candidate in a Year of Insurgency, Hillary Can't Win

John Kass
|
Posted: Mar 16, 2016 12:01 AM
Share   Tweet
The opinions expressed by columnists are their own and do not necessarily represent the views of Townhall.com. 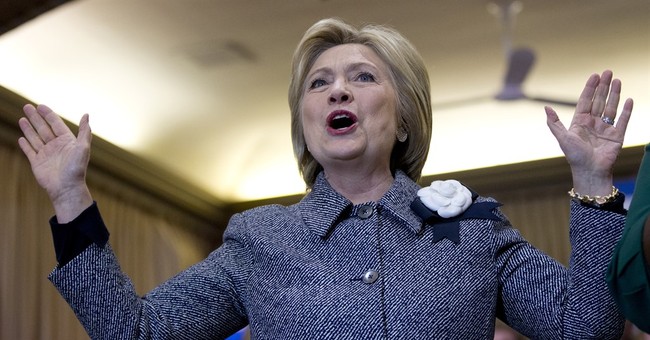 Hillary Clinton will not be elected president of the United States.

Why? Because she can't win, that's why.

And the sooner you figure this out, the calmer you will be.

She wants desperately to win. She's endured painful decades of Bill, years of Barack, eating all the insults like so many sins and swallowing them down as the price of her ambition. It's all there in the dull weight of her eyes.

But I just don't see Hillary winning this election, because she's the lone candidate of the establishment in a year of insurgency.

Common wisdom and her fierce Clinton tribalists will probably want me burned at the stake for heresy, or chemically altered. But this is an insurgent year. And she's the Empress dowager of the Washington establishment.

Democratic socialist Bernie Sanders isn't an establishment creature. And on the Republican side, economic nationalist and self-funding Donald Trump and conservative Ted Cruz are definitely not establishment. Cruz and Trump have been at war with their party. The GOP establishment needs Cruz now, but they don't like him.

And they're angry with Trump because he won't take their money, although in the last Republican debate Trump did something brilliant. He suggested he may be open to fundraisers if he's the Republican nominee, smartly giving those money boys an opening. This was missed by the media in all the talk of Trump's new tone. But the insiders certainly noticed. All they want is access. By hinting that he may allow it after the Republican convention, Trump means to charm them into leashing their dogs.

Clinton is the political embodiment of the establishment. And that spells serious trouble for her, because the American people are in an insurgent mood, fueled by the holes in their bank accounts, all those jobs Bill Clinton sent overseas with his support of NAFTA, and the rifts in what we once called the common culture. It spreads across class lines like fire in a dry riverbed. It won't stop until the weeds are gone.

Most of the public focus has been on the Republican side, on the anger over there. But the Trump rally in Chicago was shut down Friday after anti-Trump protesters massed inside the gathering.

Trump draws the spotlight, and an industry has sprung up of media meat puppets of the liberal left and of the war party center right. They wring their hands and warn America that if Trump or the conservative Ted Cruz is elected president, the republic will collapse.

It won't. But the rhetoric is quite hysterical, the theatrics entertaining, and you probably should understand the technique.

The screaming at enemies has two purposes: The first identifies the foe. That's understood. But the second involves herding votes.

Because the longer you can compel the tribe to shriek wildly and point at that tiger in the night forest, the more you can get them to fear what's out there, the tighter the villagers are bound to your side around the campfire.

It's not only about pointing at the enemy. It's about using shame -- even on social media -- to make sure the simple villagers won't stray.

But the Democrats have far fewer villagers this year. Their turnout in primaries is low. The energy is all on the Republican side. And all that shaming has kept Americans blind to Clinton's weakness.

She has other problems, including the consensus from primary exit polls that she's considered to be a liar. Young women don't like her much, perhaps because Clinton's old feminist allies tried to shame them into submission. Now Hillary is thought of as some angry grandmother.

She seems overly scripted, stuffy, tired, as if every word she speaks has been poll-tested and run past criminal lawyers. And she still hasn't won that critical FBI primary over her email scandal.

Clinton kept top secret information on a private email server and the secrets may have been hacked by foreign intelligence, compromising lives and American policy. Her IT guy has been given a grant of federal immunity and is cooperating.

FBI Director James Comey is a close friend of corruption-busting former U.S. Attorney Patrick Fitzgerald of Chicago. They're cut from the same stone. Don't be surprised if he drops one on her.

Asked in the recent Democratic debate if she would drop out if indicted, Mrs. Clinton was offended.

"Oh for goodness -- that is not going to happen," she said, angry. "I am not even answering that question."

Even Democrats who aren't excited by Clinton say that she deserves the nomination. And, if she could be honest for a moment and drop the gender identity war club, she might say that gender aside, she deserves it, too, for all the time she's put in climbing.

But Clint Eastwood explained all you need to know about the deserving to a dying Gene Hackman in the Oscar-winning Western "Unforgiven." Hackman, shot and on the ground, said he didn't deserve to go that way.

"Deserve's got nothin' to do with it," Eastwood told him.

And it was done.

Deserves have nothing to do with power politics. Timing is everything. And I don't see Hillary winning, because she's the wrong candidate at the wrong time.

'Inflation is Worse Than We Thought' and 'A Threat to Society'
Katie Pavlich
Nikki Haley Reminds VA Voters: 'Up to us to remind them parents have the final say in child’s education'
Rebecca Downs
Poll Conducted for Democratic PAC Shows Absolutely Devastating Results for Senate Democrats