If Police Shooting Video Had Been Released Sooner, Would Emanuel Be Mayor? 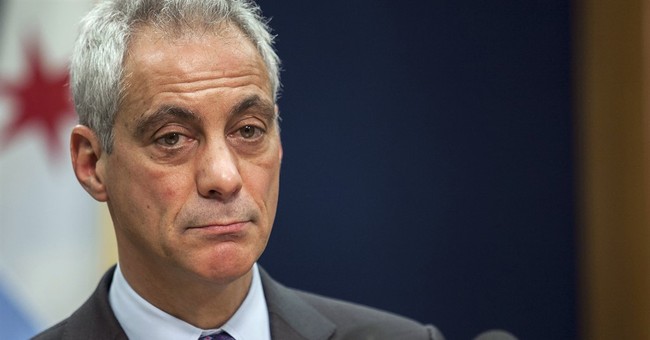 Would Chicago Mayor Rahm Emanuel have been re-elected if voters had seen the video of Laquan McDonald's execution?

Without the black vote, Rahm Emanuel would not be the 9.5-fingered boss of Bartertown.

Black political figures would have been uneasy standing with Rahm. They would have run away. They couldn't stand with him.

Emanuel could have even sat in President Barack Obama's lap for a photo -- both of them wearing matching Dr. Denton pajamas (the kind with the feet) and sipping identical cups of cocoa.

And that still wouldn't have saved him.

So Emanuel buried the video. And black politicians and clergy got busy getting out the vote for Rahm. He won the April 7 runoff election, and only then did he have the aldermen vote to pay a $5 million settlement to the McDonald family.

If the video had been out, if Chicago had watched it before going to the polls, Emanuel would have lost the black vote.

But just to make sure of my theory, I called the one guy who'd know: Cook County Commissioner Jesus "Chuy" Garcia, the mayor's opponent in the 2015 election.

"Yes," Garcia told me over the phone. "That video would definitely have changed the political environment.

But they didn't see it, until it was too late.

"There's just some basic Chicago arithmetic in there. He wouldn't have received as much votes from the African-American community," Garcia said. "It isn't rocket science. It's arithmetic. And so yes, this tragic video would have had a profound impact."

You can see the truth of it by watching the other politicians scrambling for cover in the wake of the Laquan McDonald video release.

They don't like questions about how they helped Rahm win. That puts the jacket on them. And they don't want to wear the jacket.

So they're stitching one up for Cook County State's Attorney Anita Alvarez, who charged Van Dyke with murder the other day.

They want Alvarez to wear the jacket for it all.

Rahm seems to be throwing her under his bus, but he doesn't want his fingerprints on her. So his ally, David Axelrod, threw her under.

Axelrod is a Rahm pal, but for years he was also the mouthpiece for former Mayor Richard Daley, and was the top political and media strategist for Obama. It's a Chicago thing.

"Why did it take a year to indict a CPD officer who shot a kid 16 times?" Axelrod tweeted Tuesday night. "Would it have happened today if judge hadn't ordered video release?"

That puts it on Alvarez. Does she deserve it?

The video threatened Rahm Emanuel and his pursuit of power. Alvarez told reporters she'd been waiting for the feds to issue a joint announcement with her office. That didn't happen.

Funny how things work out.

Axelrod's tweet legitimizes a self-preservation tactic Chicago politicians have been pursuing for the last day or so: They know people are angry over what happened to 17-year-old McDonald. They want to be safe from that anger. So they're directing the mob to go against Alvarez.

On Wednesday, I headed over to my old haunts at City Hall to see the circus in action. The City Council's Black Caucus had called a news conference, and there, in one rambling, cloudy speech after another, they made it clear they weren't responsible for a thing and that there needed to be changes.

Not their jobs. And not Rahm's. Instead, they saved their outrage for police Superintendent Garry McCarthy and Alvarez. Then they rambled some more.

But even in cloudy waters you might still see a slippery bullhead, if you can spot the fins or the chin whiskers. And so I reached down, got my hand wet and asked:

Would Emanuel have won the African-American vote if that video had been seen before the election?

Most just looked at me as if I were a space alien saying "I come in peace" in some frightening alien tongue of clicks and whistles that they couldn't understand.

Later, I cornered one of the aldermen and asked again.

"No," said the alderman, meaning no, Rahm would not have won the election. "But you already knew that. Why are you asking us?"