Hillary Clinton Has Democrats in a Panic 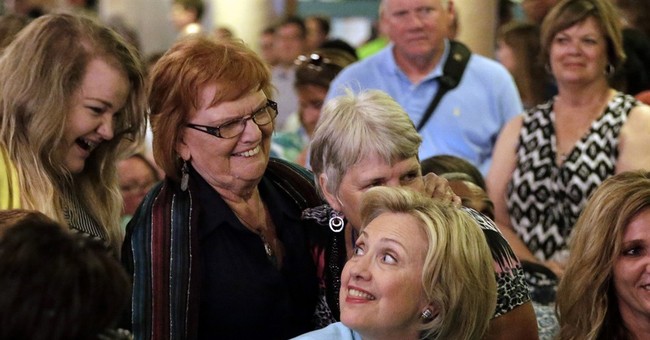 America isn't yearning for Al Gore, the $200 million man, to run for president and save us from those 1 percenters and their obnoxious carbon footprints.

The same holds true for Crazy Uncle Joe Biden. The vice president has as much bad video in his past as Donald Trump, only his are worse, since Biden's come in strange accents.

But they've been floated out there, listing like balloons in our presidential parade, because the Democrats are in a panic. And you know why:

Hillary Clinton is in the early stages of political sepsis.

Madam Inevitable cut herself with some bad emails. And rather than wash the wound thoroughly with soap that stings, maybe apply a tincture of iodine, she went into deep denial and jammed those fingers in her pockets.

She kept pretending it was nothing, really, and now they're puffy and throbbing and downright uncomfortable, especially for any Democrat who thinks a few months down the road.

But Gore as a candidate? Please. If by some weird happenstance he actually gets in the race instead of merely teasing us, it won't take two minutes before he's puffing up his chest, talking in that scary Foghorn Leghorn voice, flapping his arms like a cartoon rooster.

At the big debate he'll start rolling those eyes, just as he did before, sighing loudly and incessantly like a teenager bent on burning your ears because you said he couldn't go to the concert. And Democrats will turn to each other and say:

Why did we do this again?

The same holds true for Biden. In the end, the grownups will ask that Joe remains locked in the White House basement until this thing blows over.

Hillary was the inevitable one. And a year ago she would have laughed that mirthless Hillary laugh and taken a pin to any Gore and Biden trial balloons. And she'd smile as they made those sad hissing sounds that balloons make when they fly off and die.

Of course the Republicans are enjoying this, even as most of them endure Trump, a man so in love with his own voice that he believes his brain farts are policy.

The other day Trump said he wants to take ISIS' oil wealth. That's the kind of thing Saddam Hussein wanted to do. It would give Vladimir Putin and every other boss the pretext to do the same. You see something, you grab something and say "President Donald did it too." Kuwaiti oil, or land, who knows, just take what you want and watch the world go away.

Republicans shouldn't enjoy themselves too much, because Sen. Elizabeth Warren is out there. She's silent. When Warren stops being silent, they should worry.

For now, Hillary's political health is a legitimate issue, centering on those tens of thousands of emails she kept on a private server at her home as she went about her country's business as secretary of state.

After denial and stalling, she finally turned her server over to the FBI. Her critics insist this is a criminal issue. But whether it is or isn't, the damage is political because of one simple, nonpartisan question: Was her private server compromised by foreign intelligence agencies?

Using private servers helped shield her work product from the public and congressional committees trying to find out more about Benghazi. But her paranoia, and her arrogance, could also very well have put her country at risk.

Every day we learn about secure systems being hacked. Most of us can't write or understand code, but that doesn't stop us from reflexively grabbing our wallets when news breaks about hackers hitting a department store or a gas station chain. We understand that. We know such thieves are out there.

They could be overseas, or sitting a table or two from your iced latte waiting to hack into your checking account. Or, they could be agents of foreign intelligence intent on the servers in the home of Madam Secretary.

And a candidate who puts their own politics over security – especially if that candidate is widely thought by voters to be untrustworthy – has a problem.

Over the weekend in Iowa, she tried to blame the Republicans and everyone but herself. She also tried to turn her email scandal into a joke while talking about her new Snapchat account.

"I love it. I love it," she said. "Those messages disappear all by themselves."

Trying to turn national security into a punch line is a stupid thing to do, especially when the FBI has your server.

The political problem for the Democrats is that she might lose the election. But what if she were to win?

We will have elected an imperial personality who felt entitled to use private email for government business – email that reportedly contained classified information, including discussions on secret drone programs and other matters.

The knife turned a bit the other day as her successor, Secretary of State John Kerry, was interviewed by CBS News about his government email.

Kerry was asked, "Do you think China and/or the Russians are reading your email?"

KERRY: The answer is it is very likely. It is not outside the realm of possibility and we know that they have attacked a number of American interests over the course of the last days.

CBS: It's very likely that your emails are being read?

KERRY: It is a possibility, there's no way for me ... and I certainly write things with that awareness."

Enjoy the rest of the summer, Mrs. Clinton. But it's too late to wash your hands of this.