It's Time for Text-Only Lanes 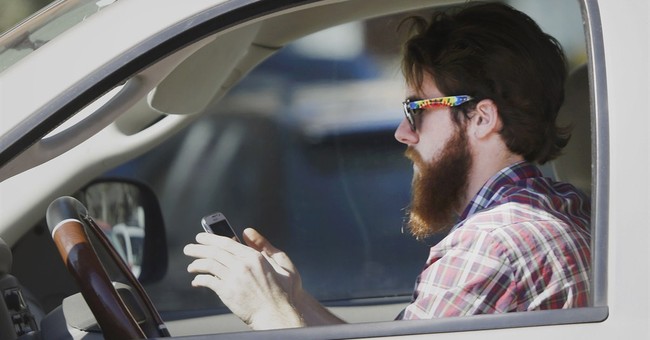 I've found a way to stop the deadly national epidemic of blithering idiots who text while driving.

Oh, it might be a tad controversial, since a few Americans will invariably get squashed like pulpy bugs. But can you make an omelet without breaking an egg?

The answer came to me as an obnoxious little bike person (a blithering idiot with a red beard and stumpy white legs) was seen riding a bicycle in downtown Chicago.

He was concentrating on the Hipster Multitask -- texting on his phone while weaving through city traffic on his bike. Then he ran a red light, in the way of many arrogant little bike people.

He also offered rude gestures to a taxpayer in a gray sedan. That guy in the gray sedan was stopped at the light, enjoying a cigar, listening to talk radio. When the bearded biker ran the red light while texting, the guy in the sedan beeped his horn.

The ginger hipster raised his middle finger in the air, spittle in his mangy beard, shouting like some deranged master of medieval archery, ordering everyone to "pluck yew! pluck yew!" The guy in the sedan gave the biker the Moutza. This is what happened next:

It's the same with texting while driving. Governments say they oppose it. But they don't have the will to stop it. Just look out the car window, and you'll see dozens of idiots typing rather than watching the highway.

The deadliest offenders are automobile drivers. Just the other day I counted six people texting and driving in rush-hour traffic.

Yet rarely do you see them pulled over, handcuffed, kneeling on the pavement, blubbering in shame. And before you say, 'Can't we just get along?' let me tell you something.

The driving texters kill narcissistic little bike people who run red lights. They kill other drivers and passengers and pedestrians.

The National Highway Traffic Safety Administration reported that in 2012 -- the last year full statistics are available -- distracted drivers, including texters, were blamed for 3,328 deaths on the road, and 421,000 injuries.

But those numbers don't tell the whole story.

Have you ever looked in your rearview mirror, spotted the driver texting in the car behind you and wondered: "What happens if he/she kills me?' Well, here's what happens.

If there are witnesses who saw the driver texting just before impact, if they decide to pull over rather than drive off, and if they tell police what they saw -- as first responders use the Jaws of Life to pry you out of the wreckage -- the offender's phone just might be seized.

But there sure are a lot of "ifs" in that paragraph, aren't there?

"You would have to have probable cause to search the phone," said Illinois State Police Master Sgt. Matthew Boerwinkle. "You would either have an admission from the driver or an eyewitness stating that the individual was texting while driving."

I'm guessing the driver-texter would get rid of the phone. And you can't remember whether he texted before impact because half your memory is on the dashboard.

The idiot texter who just totaled your car might volunteer and tell police:

"Officer? I was texting while driving. That's why I didn't see the middle-aged guy in the gray sedan smoking a cigar, listening to talk radio. Was it conservative talk? Anyway, I really wasn't texting, officer. I was tweeting. My bad."

But I doubt it.

In Illinois at least, drivers who admit to tweeting or texting get a $120 ticket for a first offense, Boerwinkle said. The maximum penalty is $375, for those caught in construction zones.

"By law you can utilize an electronic hands-free device like a Bluetooth, but texting while driving is illegal across the state," Boerwinkle said.

What drives me crazy is that if a man sits on an isolated park bench, hundreds of yards from anyone, and lights a cigar to be alone with deep thoughts, a posse of angry meat puppets will appear, shriek, shame the guy with the stogie and threaten to call the cops.

But there's not enough shaming of those who text and drive.

Then comes Hillel Aron, an unrepentant driver/texter and blogger who slapped at the texting-and-driving bans by writing in LA Weekly last year:

"Perhaps most curiously of all, people think these (distracted driving) laws are legitimate. Friends of mine who routinely hurtle down the 10 at 80 mph treat these Luddite cell phone bans as sacrosanct.

"And so when we get a call, we're forced to go digging through our glove compartments like desperate raccoons, looking for our filthy ear buds, an act infinitely more dangerous than simply holding something up to our ear.

OK then, if the government won't stop them, I have a reasonable solution.

All the feds and locals have to do is pick a designated texting lane.

The right lane on a highway has much merging and exiting and entering. That won't do. But the left lane, the passing lane, the speed lane? Perfect.

Barricades can be set up to prevent them from drifting across traffic, the way some cities like Chicago establish designated bike lanes.

Texters? Just stay in your lane, drive fast, don't look at the road, text and stare at your phone at speed. Enjoy.

Your numbers will decrease in tragic Darwinian fashion, until there are hardly any of you left to text those three little words, "Nuts to that."

Liz Cheney Is Reportedly Looking for the Exit and It Cannot Come Soon Enough
Townhall
'Planned Parenthood baby' AOC wants to talk about how many lives PP has saved (others would like a word about that too)
Twitchy
A Major Biden Administration Scandal Is Brewing
Redstate
WATCH: Biden's Reading From Teleprompter During Speech Goes Horribly Wrong
PJ Media