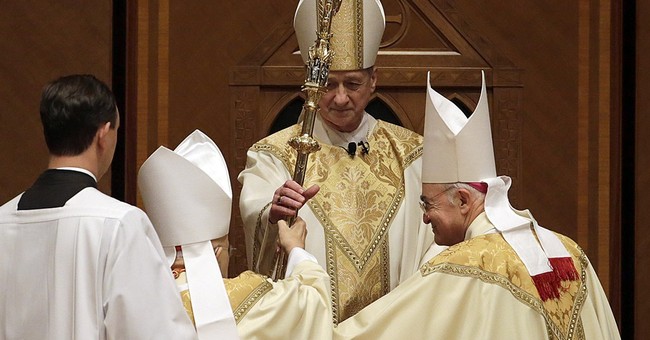 Cardinal Francis George of Chicago -- the intellectual rock of the Roman Catholic Church in America -- died in his bed the other day.

"I expect to die in my bed," George said years ago.

These are the first few words of a controversial quote that set out the problems of faith in an increasingly secular West that he believed had become hostile to faith.

Cardinal George died, as many know by now, at home. Friday, after a long battle with cancer.

Many words will be written about him, his Chicago connections, his shepherding of the Roman Catholic Archdiocese of Chicago at a difficult time. I leave much of that to others.

I'd like to spend more time on that quote in which he predicted he'd die in his bed. Why?

Since the news broke of his death, I keep hearing it said that he was an intellectual leader. But you have to give reasons for such talk.

And I want to remind myself that though Cardinal George had a clear and simple faith, he was not a simple man.

He was a man of formidable intellect who spent his life questioning and carving and honing thoughts until they became sharp and clear ideas in his mind.

He was not given to bending or simpering or appeasement on matters of theology. And because he refused to bend, on gay marriage, on women in the priesthood, there were many political types who despised him.

Yet what could they expect from the Roman Catholic Archbishop of Chicago? Did they expect him to be a Santa Claus and give them what they wanted?

Perhaps those who need reminding the most are those who might wish to mold Cardinal George post-mortem into an object of their own political utility, as if he were a lump of clay.

It happens with other public deaths, with athletes, public figures, even politicians. Cardinal George was not a good politician. He was not a compromiser.

He was a faithful priest, and he guarded his faith, unbending in his Roman Catholicism, understanding why it was difficult, why it couldn't please everyone, and he wasn't afraid to explain the reasons.

I admired that in him very much. I admired his clarity. And personally, I liked the man.

And I enjoyed the time we spent together, talking about faith and church and the West and the East, in that great, dark residence on North State Parkway.

Here is what Cardinal George said, the whole quote, not to me, but to priests a few years ago.

It was explained in a column by Tim Drake of the National Catholic Register. Parts of the quote had been repeated, and Cardinal George wrote his own column to provide context.

That's the part that many remember, as if it were a gauntlet thrown into the face of the federal leviathan by a defiant church militant.

But then he added the rest of the thought, the part that had either been dropped or ignored by those who quoted him:

"His successor will pick up the shards of a ruined society and slowly help rebuild civilization, as the church has done so often in human history."

Are things that bleak for Roman Catholics, for Orthodox Christians, for Protestants and others in the West?

Try reading the newspapers as he would. Examine the angry columns denouncing Christians as bigots for following their faith. Follow the culture war that has been won by the American left. Scan discussions about tolerance for minority views and religious freedom.

Cardinal George understood what was coming, even as he suffered with his cancer and reconciled himself during this past Lenten season. That he was able to hold on for one more Easter Sunday seems a blessing.

One night, years ago, he was ill and tired after a 16-hour day preparing to go to the Vatican and the conclave that would name Pope Francis. Still, he took time for me and we spent hours talking.

"Welcome," he said, taking my hand, motioning me to sit beside him. "We've got a lot to talk about."

Cardinal George wanted to get right to the issue of faith and the West. So we did.

He shook his head, no.

Later, he talked about the difficulty of surrendering.

"So we could say maybe (some) people have lost the gift of faith because we've created a society where people can't believe," he said. "It's impossible -- well, not impossible, never impossible, but very difficult -- to believe because it goes against the grain to say, 'I surrender my life.' Maybe it's why marriage is in such difficulty because when you're married that's what you do. You surrender your life to a woman or a man, a husband, a wife. Well, faith means you surrender your life to God."

And he died in bed, as he figured he would.