Ferguson a Lesson Lost on Race 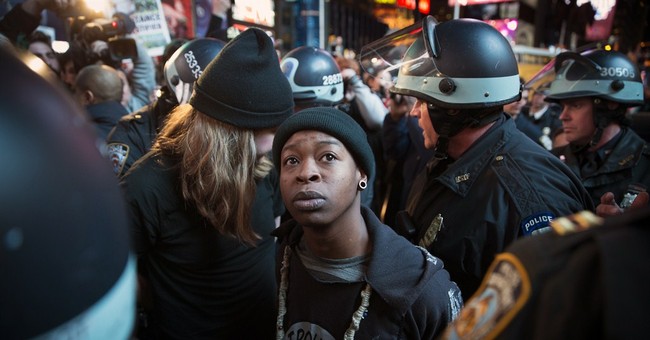 Trending
Of all the wild talk coming out of Ferguson and the killing of unarmed black teenager Michael Brown by a white police officer -- and all that angry and predictable noise emanating from race hustlers like Al Sharpton -- there are two things I just can't shake.

One involves Louis Head, Brown's stepfather. Head had been standing before a crowd in Ferguson on Monday night, comforting his wife, Brown's mother, Lesley McSpadden, who was weeping as news broke that there would be no indictment against Ferguson police Officer Darren Wilson.

You know the basic elements of this. Wilson had shot Brown to death in August and America had split, predictably, into camps. Some of us wanted to see all the evidence before making a decision, and those convinced that Brown was the victim of white institutional racism had already made up their minds.

The way some told the story, Wilson killed Brown without reason. And so they demanded, if not a legal lynching, then at least courtroom revenge that could be passed off as justice. But without an indictment, revenge would have to wait, and this week in Ferguson, the crowd didn't seem eager to wait any longer.

You may not have seen that clip. It's the kind of thing that might be too strong, even for TV. But waving his hands, gesturing wildly, screaming of burning, it was obvious that Head had given in to rage.
CARTOONS | AF Branco
View Cartoon

If he were just another screamer on the street, that would be one thing, but he is the husband of Brown's mother, and that gave him instant credibility. A few minutes later, Ferguson began to burn.

Was Head responsible? I can't say, but a reasonable man might suggest it was like striking a match in a fireworks factory.

You must have seen the photos, especially of the cars that were burned and TV reporters hustling to get the cars -- burning brightly orange in the night -- into the camera frame over their shoulders as they did their stand-ups.

Buildings burned, too, and others were broken into and robbed. Shops were looted by gangs bent on mayhem, the crowds running into the stores, some of the shops with signs that told the looters these were black-owned businesses. But that didn't stop those who came to take, and you could see them running out again with goods in their arms, giggling and shrieking as they celebrated their wild spree.

The other image I can't shake is of Natalie Dubose, a woman who had spent years scrimping and saving to open her bakery shop, Natalie's Cakes and More. Thanksgiving is a big week for bakers, and she had orders to fill before looters destroyed her place.

The talking heads and the politicians keep stressing that we should learn from our mistakes, that we should change things. But what, exactly, do they want to change? They're vague and purposely so. Should we change the way we talk about race in America? Perhaps, but it's become so easy, and profitable for some, and we've memorized the rituals and we know the symbolism. I don't think we'll change it any time soon.

Was Michael Brown's killer protected by racist law enforcement? Was Darren Wilson the victim of cynicism and race card hustlers who continue to use the same tactics, year after year, because they can get away with them?

Those apt to believe the police account seemed vindicated by the grand jury witness testimony that was released to the public, the accounts of all those neighborhood witnesses and Wilson's own testimony. He described in detail the confrontation, and Brown punching him in the face, Wilson feeling as if he were a "5-year-old holding on to Hulk Hogan," and the gunshots, Brown charging in those final few feet before that last shot put him down.

I'm inclined to think that if you reach into a squad car, grab at a police officer's gun and punch him in the face a few times, you're probably going to get yourself shot to death.

Sharpton continued to push the line that Brown was an innocent victim and prosecutor Robert McCulloch was at fault for not indicting Officer Wilson.

"Let the record be clear," Sharpton, speaking of McCulloch, told a news conference at Greater St. Mark Missionary Baptist Church in St. Louis. "You have broken our hearts, but you have not broken our backs. We are going to continue to pursue justice."

Justice? What about justice for Natalie Dubose, and other African-Americans who saw their businesses ruined? Where's their justice?

I wish I could tell you we learned something from Ferguson, but I can't. All I've been hearing is the old tired politics, and the old tired excuses.

What did America learn from Ferguson? Not much.