Even in Defeat the President Remains Inscrutable 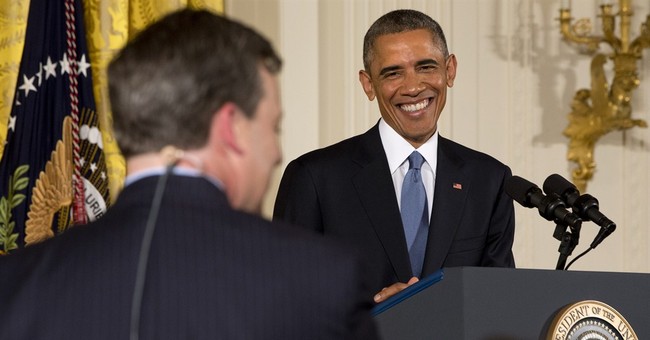 In "The Secret Life of Barack Obama," our story begins, as such stories often do, with our hero in a dream.

He's photographed on a Hawaiian beach, posed by his handlers like some Hollywood starlet, droplets of sea foam dripping from his Chicago litheness, the voters primed, yearning the way the girls once yearned for the Beatles.

Later in Minnesota, having secured the Democratic presidential nomination, he channeled supernatural powers, loudly commanding the seas to stop rising and the planet to heal itself.

And after having been president for less than a year, he was awarded the Nobel Peace Prize, though he had done little to earn the honor.

Sadly, humans must wake up from dreams, even dreams that actually took place in what's called "real life," and this one ended after the polls were closed in the midterm elections.

Voters mercilessly thwacked Obama's House and Senate Democrats in a stunning rebuke of his politics and policies.

And the Democrats ran from Barack Obama as if he had some contagious virus, some ruining themselves by publicly refusing to say if they'd even voted for him for president.

Arguments like these are often made after the votes are cast. But before Election Day, with Democrats running from him as if he were a zombie, they weren't interested in arguments. They were interested in winning.

And they didn't win, did they?

Obama wasn't the only loser. Hillary and Bill Clinton crisscrossed the country trying to drum up Democratic votes, and the results were feeble. So look for a challenger to Clinton Restoration 2016 to come from the Democratic Left.

But Obama is the president. So he's the one blamed, and is the biggest loser.

"I think when they look at Washington, they say nothing's working and it's not making a difference and there's just a constant slew of bad news coming over the TV screen, then you can understand how folks would get discouraged," he said at his news conference Wednesday.

"But, it's my job to figure this out as best I can. ... If the ways that we're approaching the Republicans in Congress (aren't) working, you know, I'm going to try different things."

Just then over the TV screen -- I'd been watching MSNBC to enjoy the cringing and keening shrieks of the liberal hosts -- a message flashed:

Meanwhile, it was obvious that our president was in denial.

A reporter asked him about the 2010 midterm repudiation when he first lost the House, an election he then bluntly and honestly called a "shellacking."

So he was asked: What would he call this?

Obama wouldn't say. You might think he'd respond with, "Heck, if 2010 was a shellacking, this one was a big-time butt kicking." But he didn't say that.

Or, he might have said, "Look, what I said in Chicago was truly stupid, that nonsense about how I might not be on the ballot in November, but my policies sure would be.

"Why did I say that? Why? Why? I should never have said that. My bad."

But he didn't say that either.

And pressed on what he would call the rout he and his party experienced in the 2014 midterms, he offered an amazing response:

Nothing, really. Just avoidance. If he were a choreographer he'd have offered up negative space. But he's a talker, so he tried metaphor and platitudes.

Of course, he did it smoothly, as his rhetorical gifts (not his administrative skills) were what put him in office.

He wasn't seething. It wasn't as if he were clicking steel bearings in his hand, angrily demanding to know who stole the strawberries from the officer's galley. Obama was cool.

But it was depressing.

About the only thing he was direct about was threatening the Republicans that he'd use executive powers to force amnesty for undocumented immigrants if they didn't send him the right kind of immigration bill.

That will be the squabble that dominates the news in coming weeks.

If the president was in denial, the Republicans were also in dreamland, talking of unity while pretending there isn't a civil war within their party.

The establishment GOP has gone out of its way to demonize its own conservative base, they've done it expertly over the past few days, stabbing by proxy, hidden safely as "Republican sources" in several national political stories.

At the news conference, Obama was asked about Democrats keeping him from battleground states and for once he opened up, just a bit, before putting up that impenetrable shield.

"I love campaigning. I love talking to ordinary people. I love listening to their stories. I love shaking hands and getting hugs," he said, catching himself, shifting onto safe ground, "... and just seeing the process of democracy and citizenship manifest itself during an election."

The man is able to move seamlessly, from seeking and getting hugs to offering a civics lesson. Obama remains, some might say, inscrutable to the last.