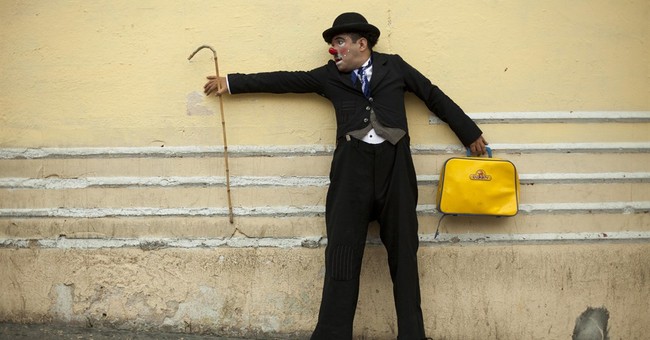 Trending
Coulrophobia is a terrible condition that can strike anyone, at any time, but especially if you're within reach of a weird grown man with white face makeup, perhaps a wig, floppy shoes and a big red nose.

Coulrophobia is best known by another name: clown fear.

And many are in fear these days, as gangs of evil clowns -- some with knives, others brandishing sex toys -- scare the living heck out of people, even in France.

Some good clowns say the evil clown attacks have been inspired by the ghastly "Twisty the Clown," from "American Horror Story: Freak Show" on FX.

Twisty is the creepiest clown in the history of fictional clowns, a dirty psychopath with a filthy, stained costume who stabs his attractive teenage victims to death just as they're "making out" on a blanket.

"I'm going to say it's seasonal," said professional clown John "Jay Jay" Joseph, of Arlington Heights, Illinois. It was a telephone interview, so we can't be sure if he wore his clown face during our talk.

He does kids shows mostly, and his most popular clown is called "Goober."

"Every time this year we get the same garbage, and it doesn't help when you're in a movie with a killer clown in it," said Mr. Joseph. "It's a trend, like kids who yell, 'Oh, I'm afraid of clowns!' It's fashionable to be afraid of clowns, and they're not really afraid of clowns."

Not really afraid of clowns?

I beg to differ, Mr. Joseph, Jay Jay, Goober or what-have-you. They really are afraid of clowns. And they have good reason to be very much afraid.
CARTOONS | Chip Bok
View Cartoon

Some gangs of evil clowns are now using machetes to scare people in California. And right here in the Land of Lincoln, aggressive clowns are said to have employed sex toys as weapons.

It happened recently outside a haunted house in Montgomery, Illinois, where a pair of clowns in so-called bloody clown costumes allegedly made threatening gestures with the aforementioned sex toys, even jabbing people with the sex toys where they didn't like to be jabbed.

It was all detailed in a lawsuit, so I won't do what WGN-TV News did and describe the weaponry as "electrical neck massagers."

And as we wait for the dramatic Clowns with Sex Toys trial, evil clown attacks continue elsewhere.

It started in California. And quicker than you can say "Creepy Clown Attacks," the heartbreak of coulrophobia spread worldwide.

"We have had over the past week three calls of a suspicious person dressed in a creepy clown outfit," Sgt. Tom Weger in Fishers, Indiana, told ABC News. "We believe it's just one individual dressing up as a clown and kind of creeping people out a bit."

Similar acts of Random Clown Predation, or RCP, have been reported in Florida, New Mexico and now in Montpellier, France.

According to Eurovision, clown gangs have swarmed southern France, assaulting passersby and, armed with hammers, guns and knives, have been stopping cars and demanding money.

This has so outraged Gallic authorities that they've issued a public warning to those dressing up as clowns, asking them "to realize the panic they are inflicting" and, "to consider the consequences."

There are three traditional, shall we say "classic" categories of clowns:

The Whiteface, the Auguste and Hobo (habitues of railroad box cars and who most likely smell of body odor and cheap whiskey).

And so is the scary, fictional Twisty. He clowns. He kills.

Twisty also has a gigantic set of choppers, teeth so large they seem to belong to a horse. He has a maniacal grin, and politely offers pop-up bouquets of paper flowers to his victims, just before he disembowels them.

Naturally, Twisty has hurt the feelings of what is commonly called "the clown community," although with so many different types of clowns, it is impossible to lump them all together for the sake of political correctness.

Still, the World Clown Association condemned any fiction that demeans clowns or causes tears in a clown.

"In my opinion these horror characters are not clowns," said Randy Christensen of the association in a statement. "People dressed as horror clowns are not 'real clowns.' They are taking something innocent and wholesome and perverting it to create fear in their audience."

But Kohlberger's office later issued another statement to this column, saying it was all a lie and that he never said it.

President Trump Wouldn't Dignify This HuffPo Reporter's Question with a Response
Bronson Stocking
New FiveThirtyEight Forecast Not as Certain as It Appears
Micaela Burrow
AG Barr: Suspect Arrested In Shooting Death of Child That Sparked 'Operation Legend'
Ellie Bufkin
FACT CHECK THE LEFT: Do Anti-Gig, Anti-Freelance Job Laws Loved By Biden and Harris Do Any Good At All?