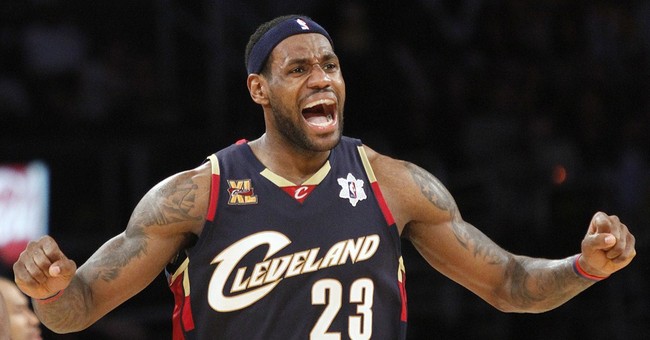 If you're from the Midwest, you probably hated LeBron James.

Not true hatred, of course. I'm talking about sports hatred.

Sports hatred isn't something a sane person acts on. But sports fans feel it. It's cold and bitter as you watch that one athlete from that other team who seems to cut your heart out year after year after year.

LeBron is that athlete.

He's devious enough to have planned it. He left Cleveland for Miami, and during those four years, Cleveland hit rock bottom, and Cavaliers fans hated him the most. Over those years, the team picked up plenty of young talent.

So LeBron now returns to reap the love and perhaps the rings to come. And the rest of us? Try as I might, I can't hate him anymore. Perhaps it's because I recognize an ancient pattern in all this.

You see it in literature, the adventure of the hero of many faces, the young man on a quest who is all but dead and buried before finally making the return home.

LeBron James isn't an archetype. He's a ballplayer. But he's pushing 30, his knees won't hold up forever and his odyssey is about done.

This last LeBron chapter is The Return.

Perhaps it's a Midwestern thing, about family and neighborhood and the people who knew you when you were a kid. I'm not saying other people, born in other parts of the country, don't feel it. Sure they feel it. They often talk about it.

But Midwesterners act on it.

The only time our Midwestern insides feel comfortable and settled is when we're home. It's tribal, this business about being part of a clan, whether you're from the city and can still smell the neighborhood in your memory or if you're from some town surrounded by soybean fields.

Iowa knows this, and Indiana, Illinois, Nebraska, Kansas and Minnesota. Michigan and Missouri know it. North Dakota, South Dakota, Wisconsin and Ohio know it, too.

And the outlanders trying to mock it? Or the ones who call us "The Heartland" as they fly overhead?

You can't explain it to them. They can't comprehend it. It's as if they're from another country, without the language for understanding.

Perhaps that's because they are from one of our coasts, or they're from Washington, the capital of the world, which might as well be another country for the psychic distance between us.

Washington is a place, like L.A., like New York, where people go to make new lives. And in exchange for those lives, in media, politics, business or the arts, they give up a great deal of their past. They're washed of the old. They make new selves.

"Before anyone ever cared where I would play basketball, I was a kid from northeast Ohio. It's where I walked," James was quoted as saying by SI.com. "It's where I ran. It's where I cried. It's where I bled. It holds a special place in my heart. People there have seen me grow up. I sometimes feel like I'm their son. Their passion can be overwhelming. But it drives me. I want to give them hope when I can. I want to inspire them when I can."

Reading that, I know what he was doing in South Beach for those four years he was away from Ohio.

He was at college. Not in a university, but he went away, removed himself from the people who knew him, tried different things, smelled different air. He was drafted right into the NBA out of high school, then those years with the Cleveland Cavaliers, and the man had never gone to college. He'd never truly left.

So he went away. And now he's back and talks of inspiration.

For years, he inspired envy and anger.

On the court, when he wanted to take over the game, when he was right in his mind and his body, there was nothing anyone could do about it.

We'll probably hate him again -- sports hate only -- during the NBA season. But it won't be the same. It can never be the same.

LeBron is doing what's expected. And whether he or we comprehend the cultural history of those expectations, the centuries of imprinting and obligation, it really doesn't matter.

The man went on a voyage. He won his treasure. And now he returns home.

He's a Midwesterner. And we understand him.