The Republican Establishment is Worse Than Trump

John Hawkins
|
Posted: Mar 08, 2016 12:01 AM
Share   Tweet
The opinions expressed by columnists are their own and do not necessarily represent the views of Townhall.com. 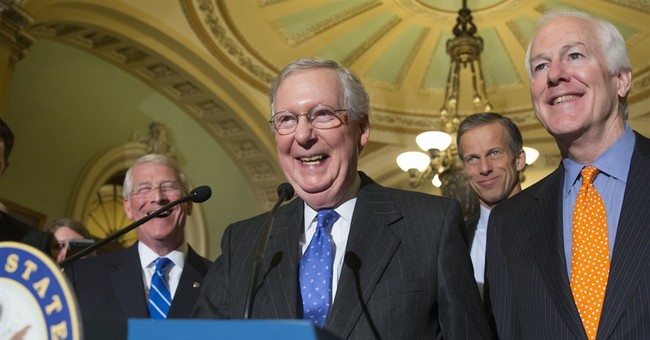 “It’s interesting that in the Washington lexicon it’s somehow treated as being unpleasant or being a trouble maker to try to honor the commitments you have made to your constituents, and to urge your colleagues to do the same. What’s considered unpleasant in the Senate is not lack of civility – you can insult the heck out of each other although I don’t engage in that. What’s considered unpardonable is actually speaking the truth and doing what you said you would do and even worse making clear, shining the light on the fact that there are a whole lot of other people willing to do exactly the opposite of what they said they would do. That’s treated as the unpardonable sin, how dare you be so selfish – and it’s funny they use the term selfish – as to actually honor the commitments to your constituents. That’s not playing the rules of the game. Well, you know what the rules of the game have resulted in bankrupting our kids and grandkids and seeing our constitutional liberties eroded. Enough is enough.” – Ted Cruz

"The GOP is nakedly now a 'clientist' party the same as the Democrat Party. They just have different clients. And those clients aren't us." -- Ace of Spades HQ

Being part of “the establishment” is more than just having power in the Republican Party or alternately being obsequious to the people in power; it’s a contemptuous attitude toward the concerns of grassroots conservatives and Americans in flyover country.

It’s an attitude that says…

* We don’t need to get the most votes to choose the nominee; we’ll just keep the candidates preferred by the peons from getting enough delegates so we can install someone we want at the GOP convention.

* Yes, we promised you that we’d fight Obama on the campaign trail, but if you actually expected us to do it, you’re a chump.

* Sure, we talked tough about illegal immigration to the yahoos to get elected, but now that we’re in office, we’re going to do the opposite.

* We’re going to use the contributions and influence of Republican Party organizations to defeat electable conservatives in GOP primaries because we prefer go-along-to-get-along moderates in Congress.

* We’re willing to do what you hicks want us to do on show votes, but when it really matters, we’re going to go against you and hope you’re not sophisticated enough to figure it out.

The Tea Party gave the Republican Party the House in 2010 and the establishment said, “We can’t do anything because the Democrats have the Senate and the White House. Give us the Senate and EVERYTHING will change. Then we’ll fight for you!”

So, in 2014, conservatives gave the establishment the Senate as well and if anything, GOP leaders became EVEN MORE compliant to Obama.

The whole idea that Republicans in Congress should keep campaign promises, fight for the interests of their constituents and stand up for the country and the Constitution is treated as an unrealistic joke by establishment Republicans. Then they’re surprised that people are so angry. When someone you vote into office sells his soul for the price of a few big dollar campaign contributions and a few nice articles in the Washington Post lauding him for being “reasonable,” you should be angry.

Meanwhile Barack Obama has been attempting to radically change the country into something unrecognizable. Obamacare, gay marriage and outright socialism are being pushed openly while we’re told there’s really no such thing as gender.  Obama’s giving Iran the thumbs up to build nukes and he’s openly flouting the law with his executive orders. While all this is happening, fourteen years after 9/11 our borders are still wide open; Hillary Clinton is being allowed to break the law with impunity; racial tensions are exploding and our debt is now so large that it’s impossible for normal people to adequately prepare for retirement. If you’re a regular American, how do you plan for the future when you can’t count on Medicare or Social Security and a debt-driven economic collapse seems like just a matter of time?

Ordinary people are afraid for their country and they become even more terrified when they listen to Mitch McConnell, John Boehner and the rest of a Washington Establishment that seems utterly incapable of dealing with America’s problems, treating the grassroots with respect or fighting for anything other than what some rich donor is willing to pay them to do.

Today, the establishment Republicans say that Donald Trump is a horrible, awful, terrible monster who will lose to Hillary and ruin the Republican Party forever. So obviously, they’re bombing Trump with massive levels of negative advertising, endorsing the only candidate who could conceivably beat him (Ted Cruz) and encouraging Marco Rubio and John Kasich to get out of the race, right?

Instead, their wallets are closed; they’re not backing Cruz and they want Kasich and Rubio to stay in the race so that hopefully, they can have a convention fight that will allow them to foist Mitt Romney, Jeb Bush, Paul Ryan or some other establishment shill on the Party. Of course, many Republicans would justifiably feel betrayed by a move like that and it would probably cost us the election, but as per usual, they’re perfectly fine with the ship sinking as long as someone in the establishment is at the wheel. They’re like noblemen who are willing to do anything to keep power except give the impression that they’re willing to respect the opinions of the dirty rabble out in flyover country. You want to beat Donald Trump? Then rally behind Ted Cruz, get the voters on your side and defeat him honestly instead of embracing a sleazy strategy designed to steal a win at the convention.

Donald Trump is not the candidate I want to see Republican voters select, but I do love the fact that he’s raised a giant middle finger two inches from the face of the Republicans who prefer to mock, ignore and alienate those of us who put them into power rather than fight for God, country and conservatism.