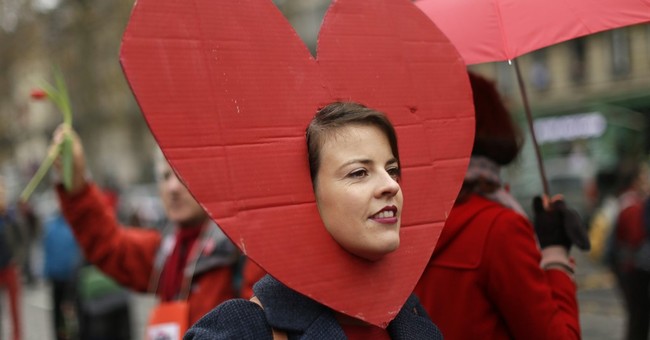 Liberals are all about emotions, not facts.

Since that’s the case, liberals do a terrible job of coming up with any sort of evidence to support their agenda. More often than not, when they do come up with a great statistic that’s repeated over and over, it’s fake. If you want some examples, here are five phony statistics you’ll regularly hear from liberals.

1) One in five college-age women have been raped.  How do you create a “rape epidemic” that isn’t actually happening? Easy. You don’t ask women if they’ve been raped; you just expand the definition of rape so much that you define merely unpleasant events or worse yet, even consensual acts as rape.

The one-in-five figure is based on the Campus Sexual Assault Study, commissioned by the National Institute of Justice and conducted from 2005 to 2007. Two prominent criminologists, Northeastern University’s James Alan Fox and Mount Holyoke College’s Richard Moran, have noted its weaknesses:

...Fox and Moran also point out that the study used an overly broad definition of sexual assault. Respondents were counted as sexual assault victims if they had been subject to “attempted forced kissing” or engaged in intimate encounters while intoxicated.

Defenders of the one-in-five figure will reply that the finding has been replicated by other studies. But these studies suffer from some or all of the same flaws.

How many college-age women are raped according to the FBI? The actual rate is “6.1 per 1,000 students, or 0.61 percent (instead of 1-in-5, the real number is 0.03-in-5).” Rape is a serious issue and dramatically misrepresenting the number of women being raped is despicable.

2) Spousal abuse skyrockets on Super Bowl Sunday.  This myth comes from misrepresentations made by liberals back in 1993.

During the era of the infamous Super Bowl Hoax, it was widely believed that on Super Bowl Sundays, violence against women increases 40%. Journalists began to refer to the game as the "abuse bowl" and quoted experts who explained how male viewers, intoxicated and pumped up with testosterone, could "explode like mad linemen." During the 1993 Super Bowl, NBC ran a public service announcement warning men they would go to jail for attacking their wives.

In this roiling sea of media credulity, one lone journalist, Washington Post reporter Ken Ringle, checked the facts. As it turned out, there was no source: An activist had misunderstood something she read, jumped to her sensational conclusion, announced it at a news conference and an urban myth was born. Despite occasional efforts to prove the story true, no one has ever managed to link the Super Bowl to domestic battery.

3) Fifty percent of marriages end in divorce. If you get married at this point, especially to a college-educated woman over the age of 25, it’ll probably be for life.

...It is now clear that the divorce rate in first marriages probably peaked at about 40 percent for first marriages around 1980 and has been declining since to about 30 percent in the early 2000s. This is a dramatic difference. Rather than viewing marriage as a 50-50 shot in the dark it can be viewed as having a 70 percent likelihood of succeeding. But even to use that kind of generalization, i.e., one simple statistic for all marriages, grossly distorts what is actually going on.

The key is that the research shows that starting in the 1980s education, specifically a college degree for women, began to create a substantial divergence in marital outcomes, with the divorce rate for college-educated women dropping to about 20 percent, half the rate for non-college educated women. Even this is more complex, since the non-college educated women marry younger and are poorer than their college grad peers. These two factors, age at marriage and income level, have strong relationships to divorce rates; the older the partners and the higher the income, the more likely the couple stays married. Obviously, getting a college degree is reflected in both these factors.

Thus, we reach an even more dramatic conclusion: That for college educated women who marry after the age of 25 and have established an independent source of income, the divorce rate is only 20 percent!

...One report indicated that the divorce rate for remarried, white women is 15 percent after three years and 25 percent after five years. This ongoing study indicated a definite slowing of the rate over time but did not have enough years measured to draw more long-term conclusions. However, it did indicate that the same factors with first divorces were at play here.

Age, education, and income levels were also highly correlated with the outcomes of second marriages. For example, women who remarried before the age of 25 had a very high divorce rate of 47 percent, while women who remarried over the age of 25 only had a divorce rate of 34 percent. The latter is actually about the same for first marriages and likely also would prove to be an average of different rates based (on) socioeconomic factors.

That’s a lot more encouraging than starting a marriage thinking there’s a 50% chance of it going belly-up.

The American public estimates on average that 23% of Americans are gay or lesbian, little changed from Americans' 25% estimate in 2011, and only slightly higher than separate 2002 estimates of the gay and lesbian population.

In actuality, the percentage of gay Americans is tiny.

The survey taken by the Centers for Disease Control and Prevention asked a simple question of 34,557 adults nationwide: “Which of the following best represents how you think of yourself?” The five possible answers were straight, lesbian/gay, bisexual, “something else” and “I don’t know the answer.” Transgenders, the “T” in LGBT, were not included.

The survey found that a mere 1.6 percent of the adult population self-identifies as “lesbian/gay,” and an even smaller 0.7 percent told interviewers they were bisexual. The bisexuals were outnumbered by the 1.1 percent who didn’t know, wouldn’t answer or said they were “something else.”

This result was far from the 10 percent that homosexual rights advocates have claimed since the 1970s.

5) Ninety seven percent of scientists agree that global warming is manmade and dangerous. How do you prove 97% of people agree with you? Find a tiny subset of a group that thinks just like you do and claim that it speaks for a much larger group of people. Joseph Bast and Roy Spencer did an excellent piece explaining how this works at the WSJ.

Another widely cited source for the consensus view is a 2009 article in "Eos, Transactions American Geophysical Union" by Maggie Kendall Zimmerman, a student at the University of Illinois, and her master's thesis adviser Peter Doran.

...The "97 percent" figure in the Zimmerman/Doran survey represents the views of only 79 respondents who listed climate science as an area of expertise and said they published more than half of their recent peer-reviewed papers on climate change. Seventy-nine scientists—of the 3,146 who responded to the survey—does not a consensus make.

...In 2013, John Cook, an Australia-based blogger, and some of his friends reviewed abstracts of peer-reviewed papers published from 1991 to 2011. Mr. Cook reported that 97% of those who stated a position explicitly or implicitly suggest that human activity is responsible for some warming. His findings were published in Environmental Research Letters.

Mr. Cook's work was quickly debunked. In Science and Education in August 2013, for example, David R. Legates (a professor of geography at the University of Delaware and former director of its Center for Climatic Research) and three coauthors reviewed the same papers as did Mr. Cook and found "only 41 papers—0.3 percent of all 11,944 abstracts or 1.0 percent of the 4,014 expressing an opinion, and not 97.1 percent—had been found to endorse" the claim that human activity is causing most of the current warming.

...Rigorous international surveys conducted by German scientists Dennis Bray and Hans von Storch—most recently published in Environmental Science & Policy in 2010—have found that most climate scientists disagree with the consensus on key issues such as the reliability of climate data and computer models. They do not believe that climate processes such as cloud formation and precipitation are sufficiently understood to predict future climate change.

Surveys of meteorologists repeatedly find a majority oppose the alleged consensus. Only 39.5% of 1,854 American Meteorological Society members who responded to a survey in 2012 said man-made global warming is dangerous.

It’s simply untrue that the scientific community has decided almost as a whole that global warming is happening, manmade and problematic. Many scientists believe that’s the case. Many others don’t. At this point, it’s merely a controversial unproven theory.