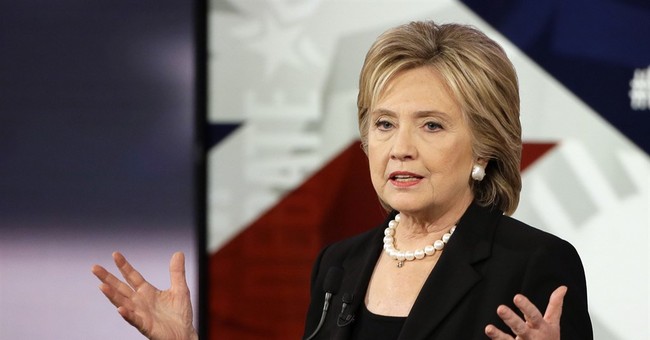 Conservatives have been amusing themselves for months by watching Hillary Clinton supporters sputter out laughable answers when they’re asked to name her biggest accomplishments. You can’t blame them for not being able to come up with anything significant because Hillary has choked on the same question in interviews. That’s one of the reasons her staffers have been shielding her from the press like a mother standing between her child and Jared Fogle.

If you want to double down on the laughs, go read an actual list of “accomplishments” on her website.

All seven “accomplishments” are things Hillary didn’t have much to do with -- like CHIP and the Family Medical Leave Act (Those went into effect when her husband was in office) or getting 9/11 first responders health care (Was that ever a question?). Alternately, they’re just ridiculous.

"Fought for children and families for 40 years and counting."

“Told the world that ‘women’s rights are human rights.’”

“Stood up for LGBT rights at home and abroad.”

The very fact that Hillary Clinton considers those things to be “accomplishments” that she should be applauded for as opposed to things that should evoke eye-rolling and “Is she serious?” comments tells you a lot about why she shouldn’t be President.

Of course, the real problem Hillary has isn’t that she doesn’t have achievements; it’s just that they’re not exploits that anyone would want to base a run at the Presidency on.

1) She has been willing to endure America’s most humiliating marriage to achieve wealth and power: It’s fun to guess what Hillary Clinton would have done with her life if she hadn’t married Bill and ridden his coattails. City council member in Little Rock, Arkansas? EPA bureaucrat? A lawyer for Planned Parenthood? She’s a very small person who latched onto her husband’s very big last name.

In return, she had to stay married to a man who cheated on her. CONSTANTLY. Worse yet, not only did she know it, the whole world knows it.

Bill Clinton was impeached by the House for perjuring himself over an affair with Monica Lewinsky. He settled a sexual harassment case against Paula Jones. He was accused of sexual assault by Kathleen Willey. He was accused of rape by Juanita Broaddrick. Then there's Gennifer Flowers, Dolly Kyle Browning, Elizabeth Ward Gracen and undoubtedly dozens of other women he’s slept with. Given that some of the troopers who guarded him in Arkansas claimed they procured women for him and his confirmed trips to “orgy island,” the number may be in the hundreds and chances are, while you’re reading this, Bill is having sex with a woman who’s not Hillary Clinton. No normal woman would be so hungry for power over her fellow human beings that she would endure that and that does separate Hillary from the rest of us who aren’t as desperate for power.

2) Four people are dead in Benghazi because of her: It seems hard to believe that it’s even possible, but there were more than 600 ignored security requests related to Libya and the consulate in Benghazi. Had Hillary paid attention to those requests, it’s entirely possible that none of our men would have died in Libya. However, Hillary claims none of those requests reached her desk. Since it’s generally accepted that Hillary lies incessantly about anything and everything, maybe that’s another lie. On the other hand, given that she’s 68 years old, hasn’t driven a car since 1996 and clearly can’t handle her own email, maybe she just didn’t know what she was doing. Either way, if we had a different Secretary of State, those four men would probably be alive today. Most of us have made mistakes at work, but how many of us have the guts to ask for a promotion after four people DIED because we missed hundreds of requests for help from them?

We helped radical jihadis take over in Libya and that country is falling apart. Benghazi also happened and while she was publicly telling the world a video caused it, she was privately telling people it was a terrorist attack. Additionally, we backed a radical jihadi takeover of the government in Egypt that thankfully fell apart. We pulled all our troops out of Iraq, which set the stage for ISIS to move in. Our relationship with the Israeli government deteriorated. So did our relationships with China and Russia. To top it all off, the State Department lost track of 6 billion dollars while she was Secretary of State. It would be easy to write Clinton off as a pitiable character whose ambition led her to take a job that was far too big for someone of her meager abilities, but unfortunately she’s trying to use her miserable failure as Secretary of State as a stepping stone to the presidency where she could do even more damage.

4) She managed to turn a career in government service into immense wealth: Hillary and her husband managed to become filthy rich one percenters because of their government service. Granted, they did cut a few corners in the process. For example, while Bill was governor, Hillary got away with taking a nearly $100,000 bribe from Robert L. "Red" Bone via sleazy cattle futures deals. While she was Secretary of State, money poured into the pockets of her husband and the Clinton Foundation from defense contractors and foreign governments that got fat contracts from the State Department. Among the governments that funneled money into the Clinton bank account via speeches are Iran, North Korea, the Democratic Republic of the Congo, UAE, Egypt, Saudi Arabia, Russia and China. They paid the Clintons an awful lot of money and if Hillary becomes our next President, people might be surprised at how much those foreign governments end up getting in return for making the Clintons rich.

5) She’s better at surviving sleazy scandals than anyone else: Hillary Clinton has been tied into more scandals than any other five politicians combined. Where she goes, an ocean of corruption, sleaze and controversy always follows. It’s amazing in a horrific way that Hillary is still considered a serious candidate for the presidency despite having more gaffes and scandals than the entire GOP field COMBINED. It would take a book to fully detail all of them, but just to name a few, there’s Emailgate, Pardongate, Whitewater, Travelgate, using the IRS to attack her political opponents, looting the White House, illegally acquiring FBI files on her Republican opponents, the Boeing payoff, the Uranium One payoff, the Norway embassy payoff, the Congo payoff, ripping off AIDS patients in the Third World, taking bribes via cattle futures, lying about landing under "sniper fire" in Bosnia, laughing about tearing apart a 12 year old girl in court to get a child rapist off and Benghazi. There are mob bosses with cleaner records than Hillary Clinton and yet, not only has she avoided prison so far, she’s running for President.