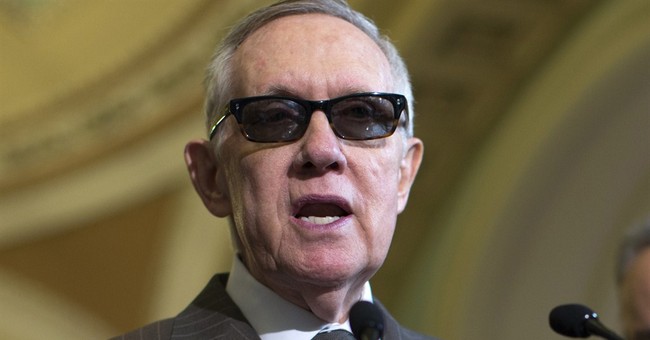 The whole case for reelecting mediocre Republicans has been, “Sure, they stink, but do you want a Democrat in office? They’re the lesser of two evils.” That’s an argument I’ve used many times myself. However, what happens when it’s no longer true? What happens if conservatives realize that they would be better off RIGHT NOW if Harry Reid were still running the Senate?

Because we would be.

Instead of reflexively saying, “That’s ridiculous,” think about what happened during the last congressional cycle.

Democrats refused to compromise with Republicans on anything and the GOP was desperate to show its opposition to Barack Obama’s unpopular agenda; so Republicans had little incentive to vote for bad legislation. That led to complete gridlock. Now that might not be the ideal outcome, but conservatives believe that no legislation is preferable to bad legislation.

Just look at what has happened since Republicans took over the Senate after spending the entire campaign cycle promising that they would fight Obama tooth and nail.

* After swearing that they’d stop Obama’s illegal executive amnesty by blocking DHS funds, the GOP Leadership in the House and Senate caved and worked with the Democrats to fund Obama’s amnesty despite the fact that the majority of House Republicans opposed it. The promise to fight executive amnesty was as important as George W. Bush’s “Read my lips, no new taxes” pledge and the GOP didn’t even hold out for TWO MONTHS before it broke it.

* Despite the fact that they’ve PUBLICLY railed against Obama’s terrible nuke deal, Senate Republicans just voted to strip Congress of its ability to block Obama's treaty with Iran. Publicly, they’re claiming that they’re holding Obama accountable, but in actuality, the bill they’re supporting will in effect allow him to do whatever he wants in Iran. Not only is it bad legislation that turns the Constitution on its ear, it’s insulting. They think everyone is so stupid that we can’t figure out what they’re doing.

* Even though Loretta Lynch said she agreed with Obama’s illegal executive orders, she couldn’t name any differences she had with Eric Holder, and she essentially said that she thought Obama had no limits under the law, she was confirmed as Attorney General with Republican votes.

* Republicans, including RAND PAUL – let me repeat that, RAND PAUL – are blocking an investigation that’s designed to kill fraudulent OBAMACARE subsidies to Congress. When even Rand Paul wants his fraudulent Obamacare subsidy more than he wants to protect the taxpayers, it doesn’t bode well for the country.

* The GOP is about to shove through a secret Trans-Pacific Partnership trade deal. Not only have the details of the trade deal been withheld from the public (Remember how well it worked out the last time we had to “pass a bill to see what’s in it?”), but what we do know about it is disturbing. According to Jeff Sessions, it limits the power of Congress to amend all international trade agreements during the deal, it allows the President to change the deal after the fact without the approval of Congress and it is likely to massively increase the number of foreign workers coming into the U.S. Perhaps worst of all, it would provide a backdoor method to limit American sovereignty because a signed treaty supersedes American law. In effect, it gives the President the power to adopt certain foreign laws related to the trade agreement without getting the approval of Congress. This bill is a Frankenstein’s monster waiting to happen and the Republican Party is working with Obama in secret to bring it to life.

* If the Supreme Court kills the Obamacare subsidies (which is entirely possible), it will in effect kill Obamacare. Without the subsidies, the whole program will collapse. Instead of saying, “We didn’t vote for it and we told you it was unconstitutional from day 1,” Republicans are openly acknowledging that they plan to save Obamacare. After all these phony promises to repeal Obamacare, after all these votes, after all the polls showing that it’s unpopular, the GOP Leadership wants to buy into Obamacare so Americans can now blame BOTH PARTIES for the disastrous legislation.

Everything the Republicans have done since they won in November has been one long “Screw you” to the people who voted for them. They’re like a 0-16 football team that gets angry with their fans for failing to appreciate how wonderful they are despite the fact that they lose every game.

We live in a Bizarro world where the Republican politicians don’t work for the voters who put them in office. In the real world, the GOP Leadership in Congress along with most of the Republicans in the Senate work for whatever lobbyist is willing to give them the most money while the voters are treated like THEIR employees. They’re for sale and the voters have been sold out because our pockets aren’t deep enough to compete with the people giving them campaign contributions.

Well, in 2016 there will be an awful lot of Republican senators up for reelection and they’re certainly not going to have much of a record to brag about. Couple that with the fact that even the French in WWII put up a bigger fight than John Boehner, Mitch McConnell and the rest of the Republican “leadership” have so far and there’s really not going to be much of a reason for conservatives to vote for Republican senators. In fact, the only thing they ever seem to be able to offer is that, “Well, it’s better to have us in charge than the Democrats.” What happens if people realize that’s not even true anymore?