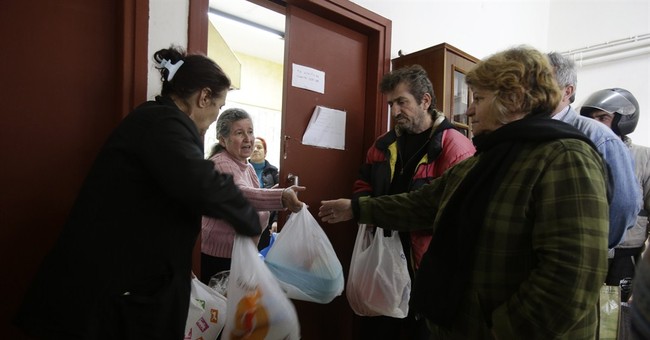 Democrats have long since realized that people who are poor and dependent on the government will vote for them, even if it is their liberal policies that created the poverty and dependency. That's why every ghetto in America is controlled lock, stock, and barrel by liberal Democrats. Unfortunately, so many destitute Americans have yet to realize that liberal policies don't fight poverty; they maintain it.

Perhaps the worst thing about that is the betrayal of the poor people involved. Most of them are just having a hard time and looking for a little help to make life easier for themselves and their families. Little do they realize that the "help" the liberals are offering is akin to a drug dealer offering them a free sample. Not every liberal intends to "hook" the people they're "helping" on poverty, but they're certainly not very upset when it happens. The more poor dependent Americans there are, the more votes liberals get; the more needed they feel, the larger the budget becomes for the non-functional, big government programs they support.

Liberals have a lot of perverse incentives to keep as many Americans poor as possible and they respond to those incentives in a big way.

1) Overuse Of Welfare Programs: Americans are a generous people and most of us are fine with having a safety net that helps people who get down on their luck. The problem with liberals is that they do everything humanly possible to turn that safety net into a hammock. They oppose limiting the amount of time people can be on the programs along with drug testing and work requirements. Obviously, encouraging people to get comfortable on the dole is bad for the country, but it's even worse for the people involved. It's one thing to get in a tough spot, take assistance for a few months, and then get back on your feet. But, spending years or even decades on the dole? It's a trap that will make you dependent on the government while utterly ruining you as a human being. There was a time when even the staunchest liberals agreed with this sentiment. Conservatives disagree with Franklin D. Roosevelt on a lot of things, but he was absolutely right when he said,

The lessons of history, confirmed by the evidence immediately before me, show conclusively that continued dependence upon relief induces a spiritual disintegration fundamentally destructive to the national fiber. To dole our relief in this way is to administer a narcotic, a subtle destroyer of the human spirit. It is inimical to the dictates of a sound policy. It is in violation of the traditions of America. Work must be found for able-bodied but destitute workers.

2) Supporting Illegal Immigrants Instead Of American Workers: While there are certainly Republicans who've been paid off by the business lobby to support illegal immigration, Democrats almost across the board are in favor of allowing as many illegal immigrants as possible into the country. If illegals were primarily taking jobs as reporters, college professors, and lawyers, liberals would ferociously oppose illegal immigration. But, since they're taking jobs that would otherwise go to poor Americans, liberals don't care. There are millions of poor Americans who are out of work simply because they can't work as cheaply as an illegal immigrant who doesn't have health care, doesn't pay car insurance, and who can lie on his taxes with impunity. Moreover, there are millions of other poor Americans who are making a few dollars less per hour because they're in a field full of illegal aliens who can work for less per hour because they don't have the same costs. Few policies would do more to put poor Americans back to work than getting rid of the foreigners who are breaking the law and cheating the system in order to steal their jobs away.

3) Fighting FOR Criminals, Not Victims: It's a disgrace that there are Americans who can't let their kids play in the yard out of fear of drug dealers on the corner, drive by shootings, and roaming gangs. Crime makes it harder to raise your kids, decreases property values, and stops people from moving freely around their neighborhoods. Rich and middle class Americans generally don't have big problems with crime because they don't have liberals "helping" them and so, they simply won't tolerate it. So, it's the poor Americans saddled with liberal "helpers" who suffer the most because of crime. Yet, liberals seem to spend all of their time worrying about THE CRIMINALS, not the people they're robbing, raping, and murdering. Liberals are always fighting to get criminals out of jail, looking to change the laws to make it harder to convict people of crimes, and trying to play up conflicts between poor communities and the police. Meanwhile, the poor Americans being menaced by these criminals are living in fear and desperately searching for jobs because businesses don't want to move into crime-ridden areas. It's not the gang bangers, drug dealers, and cop killers who deserve sympathy from liberals; it's the people they're victimizing. If only liberals could understand that.

4) Fighting To Keep Poor Americans Out Of Good Schools: Liberals have fought hard to keep poor Americans in lousy, failing schools. It certainly doesn't have to be that way. It was George W. Bush who greatly expanded access to charter schools via No Child Left Behind, a policy that has in practice mostly benefitted poor Americans. Furthermore, it's conservatives who support school vouchers that would enable poor Americans to send their kids to many of the same elite, private schools rich Americans choose today. On the other hand, liberals want poor kids trapped in failing schools because giving them the option to flee would take money out of the pockets of their teachers’ union allies. Liberals also fight tooth and nail to kill testing standards and keep lousy teachers in schools. Nobody who places a high value on educating our kids would do that. That's why If you're a poor American with a kid stuck in a terrible school system, the biggest hindrance you have to getting your child a better education is the American Left.

5) Killing Job Opportunities For The Poor: Ronald Reagan was spot-on when he said, "The best social program is a productive job for anyone who’s willing to work." Yet, liberals work incessantly to make it harder for poor Americans to find jobs. As the CBO confirmed, Barack Obama's proposal to increase the minimum wage to $10.10 per hour would cost 500,000 jobs. In D.C. big box stores like Wal-Mart were targeted with a new law that would force the companies to pay 50% above the minimum wage. As a result, Wal-Mart decided not to build six stores in an area which cost thousands of people much needed jobs. Because of Barack Obama's liberal policies, there are actually a million less Americans working today than there were the day he took office even though our nation's population has grown by almost six million people. Since the poor have less experience and fewer job skills, Obama's job-killing policies are tougher on them than any other group of Americans. We need to do everything possible to make it easier and more likely that businesses will hire poor Americans, not set up even more policies that keep them from getting jobs.