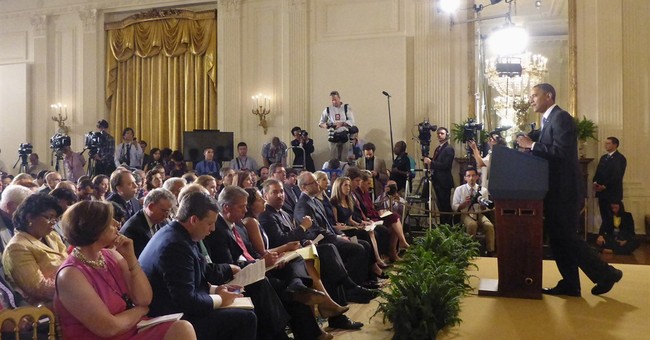 If the mainstream media were a college class, Republicans would be taking advanced calculus taught by a short tempered professor from South Korea with bad English, while Democrats would be taking remedial reading pass/fail. In other words, as long as liberals don't do anything to embarrass the Democrat Party, they get treated with kid gloves while all Republicans should assume reporters would just as soon punch them in the throat as ask them a question. What this means is that Obama seldom has to deal with tough questions a Republican in his shoes would have to hear asked on an almost daily basis. That was the case in 2008, it was the case in 2012 and it's still the case today. Whether you're talking about press conferences, cable news shows, or the editorial pages, Barack Obama should be hit with questions like these on a regular basis until he comes up with some real answers instead of stonewalling or ignoring them until they're heard no more.

1) Maj. Nidal Malik Hasan "described himself as mujahedeen" and yelled “Allahu Akbar” as he murdered 13 of his fellow soldiers. As Commander-In-Chief, do you agree with the Department of Defense report that labeled that killing as "workplace violence" or was that an act of terrorism?

2) Do you regret aggravating racial tensions in America by inserting yourself into the George Zimmerman/Trayvon Martin case by saying, "If I had a son, he would look like Trayvon?"

5) How can the American people trust the federal government to have their private data on file when we already know unreliable people like Edward Snowden and Bradley Manning are being given access to that data? Beyond that, given that your administration has refused to come clean about what you're doing and has been caught lying on more than a few different issues, how can the American people just take your word for it when you say that private information about American citizens you have no right to view isn't being looked at anyway?

6) If Republicans send you a bill without funding for Obamacare in it, are you willing to shut down the government to fund the program?

7) Your administration is flat out refusing to enforce existing immigration law. Since that's the case, shouldn't the American people assume that if a comprehensive immigration bill were to pass that grants legal status to undocumented Americans in return for tough new laws, that the new laws wouldn't be enforced either?

8) Given that the IRS has illegally targeted Tea Party groups, isn't it reasonable for Republican groups to demand that the IRS not be allowed to participate in Obamacare?

9) Unarguably, the economy has performed extremely poorly since you became President. Do you think you've made any mistakes that helped cause the problem? If so, what are they?

10) Do you consider your administration's strategy in Egypt, Syria, and Libya to be a success? If not, what did you do wrong that caused you to fail?

11) Early on in your administration, Hillary Clinton rather famously presented a button to Russian Foreign Minister Sergei Lavrov that was supposed to say "reset," but actually said "overcharge." Since the Russians are refusing to hand over Edward Snowden, is it fair to say that the "reset" failed and that relations have actually deteriorated since you took over from George Bush?

12) Are you now willing to admit that a lot of the promises made to the American people to sell the Affordable Care Act just weren't true? Prices are going up for most people, not down. Congress is getting the cost of its care supplemented. Not everybody is going to get to keep his doctor. It goes on and on. Do you feel any attacks of conscience over all the lies that were told? Does it keep you up at night?

13) In 2008, you promised to change how things worked in Washington and bring unity to the country. Obviously you've failed and things have gotten very hostile between you and the Republicans in Congress. Do you believe you've done anything to contribute to the polarization in the country and the acrimonious relationship you have with Republicans or do you believe you haven't made any mistakes?

14) After seeing the behavior of Anthony Weiner, Eliot Spitzer, and Bob Filner, are Americans justified in asking if your party is engaged in a war on women?

15) Many people have compared your administration to the Nixon Administration because of the stonewalling of Congress, using executive privilege to keep the truth from Congress, and because the IRS has been used against your political enemies. Do you think that it's fair to compare your behavior to Richard Nixon's behavior before he was almost impeached and if not, why not?

16) If Al-Qaeda has been decimated and it’s on the run, why have we had to recently close down 22 embassies and consulates because of the threat from Al-Qaeda?

17) The IRS is still flagging and holding Tea Party applications. So not only was the IRS's behavior a problem, it still is a problem today. Why did your administration allow this to happen, why haven't you taken action to fix the problems at the IRS, and what are you going to do to ensure that the IRS doesn't continue to target your political opponents on your watch?

18) How do you justify going on extravagant vacations and sending hundreds of millions to the Egyptians and Palestinians when you're cancelling Easter Egg rolls at the White House and pleading poverty because of the sequester?. Aren't you deliberately sabotaging parts of government that are popular with the country to give the false impression that the sequester is having a serious impact on government spending?

19) To this day, we still don't know what you were doing during the Benghazi attack, what directives you issued, why your administration lied about what was going on, whether you had good reason to have such lax security in the first place, and whether Americans troops could have potentially arrived in time to save the lives of the men who died. When is your administration going to come clean so that the families of the men who lost their lives can have some peace?

20) In 2012, you said, "We refused to throw in the towel and do nothing. We refused to let Detroit go bankrupt. We bet on American workers and American ingenuity, and three years later, that bet is paying off in a big way." Since Detroit has now gone bankrupt, do you think that bet is still paying off or did the American people waste billions of dollars for nothing? Do you think you deserve any blame for Detroit going bankrupt? How about unions? Are they a significant part of the problem in Detroit?