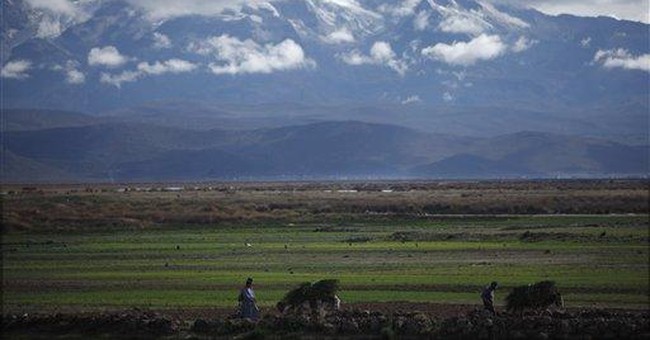 As Americans have come to realize that the "science" behind global warming seems to mainly consist of fudging data and making doomsday prophecies in return for grant money, the wheels have started to come off Al Gore's hobby horse.

Of course, conservatives have not been shocked by this turn of events. That's because unlike far too many liberals, conservatives are actually interested in science, while the Left looks at it as little more than another institution to march through and corrupt in an effort to push their political agenda forward.

We've been seeing this play out for years in the debate over global warming which has featured conservatives actually asking basic questions about the science behind it that liberals have tried to dodge by screaming "scientific consensus" at the top of their lungs.

However, when even prominent global warming advocates like Phil Jones are being forced to publicly admit what global warming skeptics have been saying for years, that there hasn't been any warming in over a decade, it's an indication that the global warming shell game has just about run its course. Soon, the global warming "true believers" will be down to environmental extremists, scientists on the global warming gravy train, and hardcore socialists with ulterior motives for promoting an increasingly ridiculous theory.

With that in mind, it's worth taking a look at some of the extreme, impractical, and bizarre changes that liberals want to make to our way of life in an effort to fight a threat that's about as real as Barack Obama's campaign promises.

1) End Short Airplane Flights. The group Plane Stupid actually wants an "end to short haul flights and airport expansion." Incidentally, in case you're wondering, a "short haul" flight runs 500-1000 miles, depending on the definition that's used. So, if these guys had their way, instead of a 3 hour flight, you'd essentially have to spend a couple of extra days on the road, each way, driving to where you are going. Maybe that sounds appealing to liberals who have nothing better to do than show up at the local "Free Mumia" protest, but the rest of us have busy schedules.

2) Wipe with one square of toilet paper. Sheryl Crow, who’s so environmentally conscious that she goes on tour with "3 tractor trailers, 4 buses and 6 cars," had a wonderful idea the rest of us can adopt to protect the planet from global warming: only use one sheet of toilet paper.


I propose a limitation be put on how many squares of toilet paper can be used in any one sitting. Now, I don't want to rob any law-abiding American of his or her God-given rights, but I think we are an industrious enough people that we can make it work with only one square per restroom visit, except, of course, on those pesky occasions where 2 to 3 could be required.


You think "carbon credits" have been popular? Can you imagine what the market for "toilet paper credits" would look like if Crow got her way?

3) The cow fart tax. All those herds of future steaks and catchers’ mitts apparently fart and belch out an enormous amount of methane. So, in order to discourage this rude behavior, the EPA has considered a cow fart tax. This prompted waggish Republican Congressman James Sensenbrenner to quip, "I don’t know if we’re supposed to develop the technology to strap a catalytic converter on the back of a cow." If they ever implement this silly tax, maybe they can take all the money it raises and pay someone to invent one.

4) Giant space mirrors. Sure, if global warming were real, we'd probably have to embrace some creative geoengineering solutions because there's no way we'd ever be able to get the whole world to go back to Flintstones-level living to cut back on greenhouse gasses. The problem is that despite all the confident sounding rhetoric you hear, we have about as much in depth knowledge of how our climate works as your dog does about a rabbit. You know, "Ooh, I can eat that! Chase, chase, chase!"

So, when people start talking about wrapping Greenland in a blanket, sending salt into the atmosphere to create clouds, or -- God help us all -- "placing a" "100,000 square mile sunshade" in space, all in order to fight global warming, wise people get more nervous than John Edwards’ before a meeting with his wife’s divorce lawyer.

5) Rent your clothes. The Allman Brothers Band was a band before its time,


"I don't own the clothes I'm wearing
And the road goes on forever
I've got one more silver dollar
But I'm not gonna let 'em
Catch the midnight, rider."


That song was released in 1970. In late 2009, the UK's Waste & Resources Action Programme (Wrap) suggested that people follow the song's lead:


LARGE wardrobes of seldom-used clothes are no longer environmentally acceptable and people should instead rent outfits and accessories, according to the British Government's waste watchdog.

...Liz Goodwin, Wrap's chief executive, said: "It could be quite liberating and free our homes and garages from all that clutter that we rarely use. By (renting), we can also get better party dresses and handbags or a better drill to do some DIY than we would be willing to buy.

"Why would anyone want to own that many things anyway? We need to have the confidence that we can get things when we need them but we don't need to have them sitting beside us every day."

Well, if it's no longer "environmentally acceptable," I guess we'll all just have to trash our wardrobes and run down to the local clothes rental shops and...oh wait. Where do you even rent socks, underwear, t-shirts, and the sort of clothes most people wear on a day-to-day basis? Maybe we can all just rent tuxedos and fancy dresses and then every day will be like the prom! Wheeeeee!