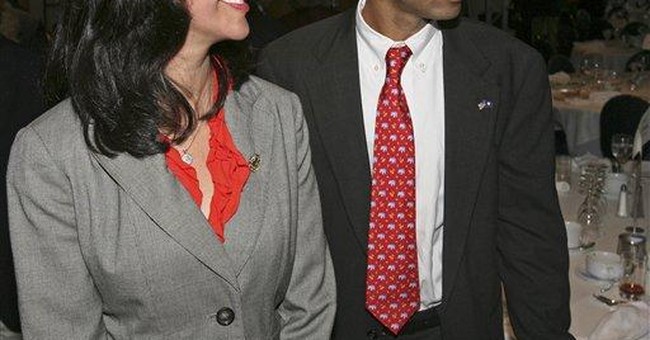 After a second crushing defeat in a row, it's not surprising that there is a debate in the GOP about whether the party should move to the right or even further towards center.

Like many conservatives, I'm of the opinion that we should move back to the right and try to formulate some new ideas and messaging using conservative principles. However, some people disagree. For the people who do, I have some pertinent questions for which no convincing answers have yet been offered.

If you're going to argue that the party needs to move even further away from conservatism, especially on issues like fiscal conservatism and illegal immigration, I'd suggest that these are questions that need to be answered first.

#1) If both the GOP and the Democrats support bigger government, how does the country survive long term given the size of the debt we already have and the deficits we're running right now? In other words, how can running massive deficits possibly be sustainable over the long haul?

#2) If the GOP were to officially become a big government party, wouldn't there be a real danger of having a large third party spring up that would represent the considerable number (I'd say a majority, at least in the abstract) of Americans who do want smaller government and less spending?

#3) If the GOP becomes a big government party, how do you see us differentiating ourselves from the Democratic Party? Do we spend almost as much as they do, but not quite as much? Do we spend even more? Do we favor deficit spending, but just on different things? Isn't there a real danger that Democrats -- since their base tends to generally be OK with excessive spending -- could simply outbid us on anything we offered to the American people?

#4) Since the majority of the GOP's core supporters don't agree with "moderate" positions like big spending or amnesty, feel very strongly about it, and feel those positions harm the party politically, how can the party continue to hew to those positions over the long term without being permanently at odds with the people who should be their strongest supporters?

#5) Let's do the math on amnesty: there are roughly 12-20 million illegal immigrants, most of whom are Hispanics. Hispanics broke 70/30 for the Democrats in 2006 and 69/31 for the Dems in 2008 according to the latest exit poll data. If the split stayed at 70/30 and 12-20 million new illegals were made citizens, that would mean the Democrats would add another 4.8 to 8 million potential new voters as a result of amnesty. The top end of that scale is a larger margin than what Barack Obama won by in 2008.

Additionally, even if the GOP improved our numbers with Hispanics -- which we certainly need to do -- we've never come close to getting 50% of the Hispanic vote. With all that in mind, isn't amnesty political suicide for the GOP?

#6) Some people tend to assume that Hispanics vote almost entirely on the illegal immigration issue, but I would assert that there is very little objective evidence for that. George Bush and John McCain are the two biggest proponents of amnesty in the Republican Party and neither of them is particularly popular with Hispanics today. In fact, according to exit polls, against a candidate who was thought to be weak with Hispanics, John McCain only got 31% of the Hispanic vote. So, what objective evidence convinces you that Hispanics vote largely on illegal immigration and that if the GOP supports amnesty, it will get us over the 50% threshold with Hispanics?

#7) Given that the mainstream media overwhelmingly supports the Democrats, it's extremely important for the GOP to have the support of conservative talk radio hosts, magazines, and the RightRoots. Since the new media is overwhelmingly comprised of conservatives, how does a moderate GOP gain their genuine support over the long haul?

#8) Follow-up question to #7: If the GOP can't get the new media back enthusiastically on its side -- which is likely to be the case unless there are changes on spending and illegal immigration policies -- how does the GOP get the base fired up? In other words, if Rush Limbaugh, Michelle Malkin, Ann Coulter, Laura Ingraham, etc., etc., are telling everyone who'll listen that the Republicans stink, how does the Republican Party work around that?

#9) Setting aside the conservative media, obviously the conservative movement is lacking energy and passion right now. Many people, myself included, would say that this has a lot to do with the position that the GOP has been taking on immigration and spending issues. How does the GOP get conservatives supporting the GOP again, instead of just opposing the Democrats, if the party continues to pursue big government policies and amnesty?

#10) If amnesty, big government, and deficit spending are winning issues for the Republican Party, why did we take such a huge beating in 2006 and 2008 despite pursuing those very policies?

There is not yet an effective Republican Leadership Council to nurture modernizing conservative ideas. There is no moderate Club for Growth, supporting centrist Republicans. The Public Interest, which used to publish an array of public policy ideas, has closed. Reformist Republican donors don't seem to exist. Any publication or think tank that headed in an explicitly reformist direction would be pummeled by its financial backers. National candidates who begin with reformist records -- Giuliani, Romney or McCain -- immediately tack right to be acceptable to the power base.

#13) Follow-up question to #12: If a moderate Republican Party is workable, how do you make it work without the new media, think tanks, money, or an excited base on your side?

#14) John McCain was the most moderate candidate the GOP has run since Richard Nixon. In fact, he's the standard bearer of the "moderate Republican" wing of the party and yet the media trashed him, he had trouble raising money -- and other moderates, including prominent moderate Republicans like Colin Powell and Christopher Buckley, voted for Obama. In the end, McCain received almost 4 million less votes than Bush did in 2006. Doesn't that suggest that moderate Republican candidates may have trouble raising money, retaining moderates, and generating the enthusiasm from the Republican base that will be needed to win?

#15) When the Democratic Party was out of power, the party moved to the left, not to the center. They obstructed the GOP at every opportunity, put hard-core left-wingers in charge of everything, and ran an extremely liberal candidate in 2008. Granted, they also had moderate Democrats that they ran in states and districts that leaned red, but those people are almost completely locked out of power and their agenda is largely ignored. Since that strategy worked so well for the Democrats, doesn't it make more sense for the GOP to pursue the same strategy instead of continuing the move to the center that has done so much damage to the party over the last two elections?