Why Dunkirk is a Must-see War Epic

John Hanlon
|
Posted: Jul 24, 2017 12:01 AM
Share   Tweet
The opinions expressed by columnists are their own and do not necessarily represent the views of Townhall.com. 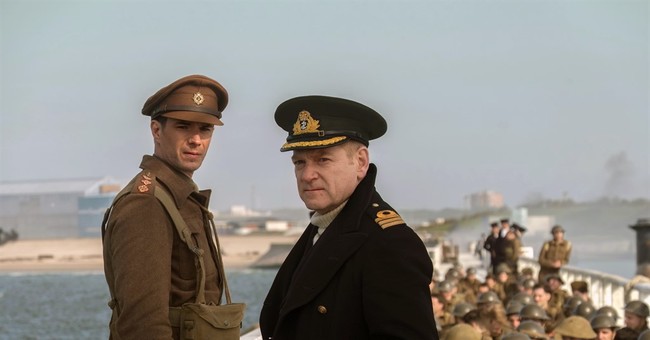 Dunkirk might be Christopher Nolan’s most grandiose film and his most personal. The director, who previously astounded audiences with The Dark Knight trilogy, Interstellar and Inception, brings a true story to life in this new feature. The story focuses on the evacuation of thousands of Allied troops from the Dunkirk beaches after the soldiers were surrounded by the German military.

In the epic's opening moments, we watch a young soldier named Tommy (Fionn Whitehead) running through the nearly-empty French streets surrounded by his fellow soldiers. One by one, his friends are struck down. The camera follows his movements as he tries to find safety from the gunfire that surrounds him. He eventually makes it to the beach only to see the magnitude of his predicament. He looks on at a seemingly endless group of stranded soldiers who are trying to go home.

After showcasing the scope of this situation, writer/director Nolan sets up the different perspectives of his story. Tommy’s story focuses on young soldiers (including one played by One Direction’s Harry Styles) who are trying to escape the beach after witnessing many of their friends get struck down. Another story — set on the water —focuses on Mr. Dawson (Mark Rylance), a civilian who takes up his country’s flag and captains his small boat over to Dunkirk as part of a nationwide rescue mission. He’s assisted by his son Peter (Tom Glynn-Carney) and his son’s friend George (Barry Keoghan). The last story is set in the air with Farrier (Tom Hardy) and his fellow pilots flying around the area and attempting to keep the enemy at bay.

Using these three main perspectives, Nolan creates an intimacy with the characters. Interestingly enough, he invites the audience to empathize with the characters without knowing too much about them. Although there’s a hint here and there about the past of these men, Nolan never divulges too much. Instead, he creates a unique power by revealing these characters simply through their actions.

The cast is stellar and there’s a great understanding that this battle was never about any one man or soldier. By never focusing in on one main character, the ensemble comes together creating a tapestry of unique stories that hints at the real-life enormity of this battle.

Hans Zimmer's eclectic score plays an enormous role here in capturing the intensity of the story. At times, the music is fast and adrenaline-fueled but at other times, the sound has an undeniably haunting quality to it, capturing the horrors of this situation.

This evacuation was a tremendously disorientating one with carriers being struck down and rescue boats being hunted by Nazi pilots. Many who thought they were on their way home never made it there. Many who believed they were safe never found safety. Nolan captures this dispiriting reality partly by relying on a supporting character named Commander Bolton (Kenneth Branagh), one of the highest-ranking officials on the beach and one of the few who knew the reality of the political situation.

In one of the film’s closing moments, a character reads part of Winston Churchill’s speech where the Prime Minister noted that “Wars are not won by evacuations.” That may be true, but heroes can come from such events, and this movie focuses in on heroes — both military ones and civilians — who would not give in to the overwhelming odds against them. Dunkirk uniquely captures some of these stories and painfully reminds us of this tragic event.