John Hanlon
|
Posted: Mar 07, 2017 12:01 AM
Share   Tweet
The opinions expressed by columnists are their own and do not necessarily represent the views of Townhall.com. 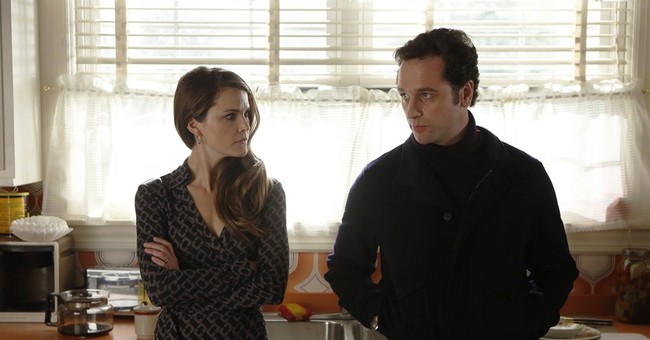 The Americans feels timelier than ever, a great surprise considering that the show is set more than thirty years ago. The FX drama, which airs its fifth season premiere tonight, focuses on a couple from the Soviet Union — brought together through marriage — who spy on the United States in the early 80s.

With the news that Russia reportedly attempted to influence the election of 2016, it feels oddly discomforting to watch a fictionalized story about Russian spies but the show’s well-written characters and plot story will keep audiences enthralled.

Matthew Rhys and Keri Russell star as Philip and Elizabeth Jennings, the parents of two naïve teenagers. The couple attempted to bring their daughter Paige (Holly Taylor) into the business last season but their attempts to sugarcoat their horrific behavior have been in vain. Ever the idealist, she continues to question her parents’ immoral choices.

Paige, who struggles with her parents’ behavior, has also started seeing Matthew Beeman (Danny Flaherty), the son of neighbor Stan (Noah Emmerich) who happens to be an FBI agent on the lookout for KGB spies.

Paige’s role on the show has increased in recent seasons and the program has brought a renewed freshness to its premise by forcing this innocent teen into their messy world.

In the early episodes of the fifth season (which were made available for review), the show introduces some intriguing new characters and stories. The Jennings — posing as an American couple with an adopted Vietnamese son — have befriended a Russian family that has defected to the United States. The father of the Russian family spends much of his time criticizing the Soviet Union, setting up an uncomfortable situation for the Jennings.

The couple is forced to hear about their former homeland and the food and housing shortages that are plaguing the nation. The Jennings are forced to reckon with the man’s stories despite their best attempts to deny the truth.

Even as they hear horror stories about their homeland, they sit and watch waiting for their inevitable strike.

Unlike the fourth season, which stumbled with a few unnecessary storylines, this fifth season showcases the dynamic strengths of this series. The characters have become more realized over the years and it’s exciting to watch them struggle with their teenage daughter’s rebellious behavior. An additional plot about a conspiracy in the American agricultural department adds a new twist to the story.

Emmerich, too, is given a rich storyline here as he questions the FBI’s handling of Oleg (Costa Ronin), a Russian who aligned with the United States at the end of season four and prevented his nation from stealing a chemical weapon from the American military. When the CIA notes that it wants to use Oleg’s humanity to recruit him, Stan responds “I don’t know what kind of organization we are if we punish him for that.” Another particular highlight of the show is Stan’s budding friendship with Philip — a relationship that really showcases who these men are outside of their professions.

There are a lot of moral lines in The Americans and it’s clear that the showrunners are willing to delve into the messy side of the Cold War. For some, the show’s pacing might be slow but more accurately, it’s diligent. This is a program that has the patience to set up high stakes and major tension in order to tell its story.

With the cast delivering stellar performances and the plot getting deeper and more enticing with each new season, this FX drama continues to stand out as one of the best shows on television.