John Hanlon
|
Posted: Jan 12, 2016 12:01 AM
Share   Tweet
The opinions expressed by columnists are their own and do not necessarily represent the views of Townhall.com. 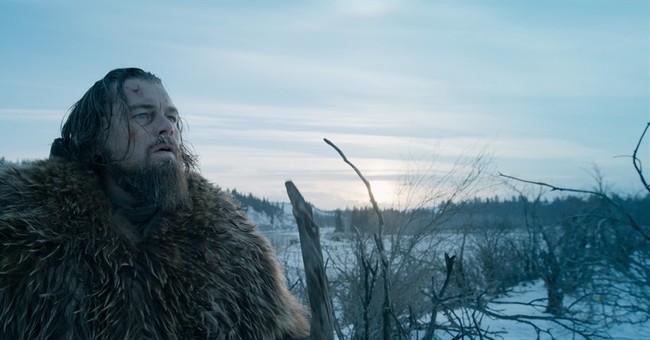 With the Golden Globe awards airing last Sunday and the Oscar nominations coming out later this week, I recently took a look at the films of the past year and come up with my annual list of the ten best movies of the year.

Overall, 2015 was a great year at the movies with a lot of great films arriving (including big budget fare like Star Wars: The Force Awakens and Jurassic World). There were plenty of box office failures as well (including financial flops like Fantastic Four and cinematic duds like Fifty Shades of Grey) but overall, the local cineplex offered an eclectic mix of strong films that overshadowed many of the disappointments.

With that in mind, here’s a list of my ten favorite films from 2015.

10.) 99 Homes: This low-budget housing drama features Andrew Garfield as a struggling single father trying to keep his family above water. When his house is foreclosed upon by the bank (in a devastatingly painful sequence), his character starts working for an unethical broker (Michael Shannon), who has taken advantage of the financial system and the government bureaucracy to become a millionaire. Much of this film’s attention has been focused on Shannon’s performance but the underrated Garfield is the heart and soul of this unforgettable feature.

9.) Joy: Watching a struggling mother of two overcome her misfortunes and become a success story may seem like the plot of a predictable movie of the week. In the hands of the creative director/co-writer David O. Russell though and with the support of Oscar winner Jennifer Lawrence, this film defies its formula and offers a delightfully unique portrayal of a woman who perfectly encapsulates what it means to be a successful  entrepreneur.

8.) Ex Machina: In this simplistic-sounding but ultimately profound look at technology, a young programmer (Domhnall Gleeson) is sent to study the humanity of a robot named Ava (Alicia Vikander). Director Alex Garland has crafted a thoughtful and insightful drama here that questions our reliance on technological advances and asks a simple question: how far off is this scenario?

7.) Room: A young woman (Brie Larson) and her young son (Jacob Tremblay) are locked in a shed together as this human drama begins. The woman has been held prisoner for nearly a decade and her son — the product of rape — has never seen the outside world before. When the woman decides that she would rather die than let her child’s suffering continue, the film takes a major turn. Undeniably compelling and emotional, director Lenny Abrahamson’s film offers both an incredible and complex story and two of the best performances of the year.

6.) Creed: In interviews, Sylvester Stallone has stated that he thought Rocky’s story had ended in Rocky Balboa (2006). However, a young and hungry director named Ryan Coogler convinced him to return to the role. In an Oscar-worthy supporting performance, Stallone brings back the vibrancy and the power of Rocky while Michael B. Jordan and Coogler deliver in breathing new life into this long-running series.

5.) Steve Jobs: Screenwriter Aaron Sorkin provides an incredible and intimate look into his subject in this powerful drama. Jobs was a technological genius but in this film, we also see the profound weaknesses and flaws of this charismatic leader. Set during the lead-up to three major announcements, the feature is brought to life by Michael Fassbender’s commanding lead performance.

4.) Spotlight: This true story shows the power and responsibility of the news media in its depiction of the Boston Globe’s reports about the Church abuse scandal at the beginning of this century. Led by an incredible ensemble cast (featuring Mark Ruffalo, Michael Keaton and Rachel McAdams), the film shows how — despite resistance from the Church and public officials — this newspaper team was able to break this devastating story.

3.) Sicario: Director Denis Villeneuve offers a devastating portrait of the U.S.- Mexican border in this visually-stunning feature. Emily Blunt stars as an FBI agent who is recruited to help stop drugs from being imported over our nation’s Southern border. What she finds is a nightmarish world of corruption and brutality — a world where there are no easy answers or clear solutions.

2.) The Revenant: In 2014, directed Alejandro González Iñárritu crafted an unforgettable vision in Birdman or (The Unexpected Virtue of Ignorance). Stunningly, he has done it again in 2015. The Revenant is an eye-opening, captivating and gorgeous look at one man’s fight to survive after being left for dead. Based on a true story, this film features DiCaprio’s most fearless performance yet and some of the most beautiful cinematography I’ve ever seen on film. The drama might be gruesome and a few minutes too long but it’s one of the most memorable movies of 2015.

1.) Me and Earl and the Dying Girl: Directed by Alfonso Gomez-Rejon, this dramedy is both one of the funniest films of 2015 and also one of its most heartbreaking. Greg (Thomas Mann), the lead character, is tasked by his parents with befriending a high school classmate named Rachel (Olivia Cooke), who was recently diagnosed with cancer. The subject is a tricky one but Gomez-Rejon manages to wring humor out of this painful experience and ultimately presents a beautiful portrait of both the pains of friendship and the beauty of everyday life.